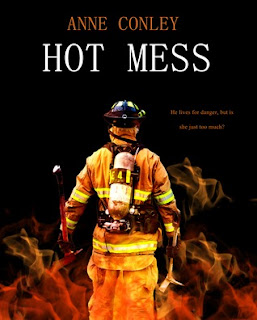 
Sam is a single dad, trying to get over the death of his ex-wife, and help his daughter move on from the loss of her mother.
​
Rachel is a single mom with a secret of her own that has kept her out of the dating scene for years.
﻿
What happens when this drop-dead gorgeous firefighter moves in across the street from the reticent woman with a past?
﻿
Sparks fly as the heat level rises in this new novel of Serendipity


I went into this book assuming it would be a nice little romance that slowly develops between two people, who had a certain amount of baggage to deal with but ultimately would work it out.  However it was more real than that.  Sam, yes, is a smoking hot firefighter who adores his young daughter whom he is now bringing up following the death of his wife.  So, you are already liking him a lot aren’t you?  I mean what’s not to like?  You want to take care of him, right?  Yeah me to!  Ooh and did I mention he is a very touchy feely kind of guy too, yes I know can it get any better?


Rachel is clearly a beautiful, strong, but very cautious woman due to her own history which is more complicated than you can imagine but the sensitive subject matter in this book was written and handled so well.  A brave move by Ms Conley to tackle this but she did a great job, and a learnt a lot about something I previously knew very little


‘The butterflies in Rachel’s stomach had babies’


‘How soon could she get back to the house & have crazy wild monkey sex with the hunka love next to her.


The story had its twists and turns throughout, with a couple of OMG moments that made my stomach lurch as well as some jeez guys get your shit together moments.  Both Sam & Rachel have their daughters to think about not just their own feelings and it was because of this that some of the decisions they both made were a lot easier to understand.


The beginning of each chapter started with either a blog post, or an excerpt from the Firefighter’s manual, and these were a clever touch to the book


Anne Conley lives in a small town in East Texas, not unlike Serendipity, with her husband, two kids and numerous goats.  She brazenly stole her pseudonym from her great-grandmother, a true pioneer woman who raised seven kids alone: churning butter, plucking chickens, knitting clothes, and putting coal oil on every visible wound.