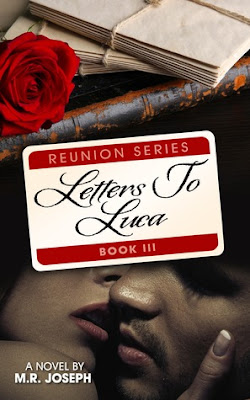 
The course of true love never did run smooth~ Shakespeare

Leighton Parks~ I only wrote the love letters to my high school crush for fear if he truly knew my identity, I would be rejected. I wasn't the most confident girl in my school, and he was well... he was Luca Ferro. How could he ever be interested in a shy, book worm like me? That's why I wrote them. To tell him all the feelings I had for him. When I stopped writing the letters, I never imagined that 10 years later they’d come back to change my life, forever.

Luca Ferro~ I always believed in soul mates, finding that one true love. And I found her, my letter girl, but never knew who she was. She was a mystery. Her letters, her words, meant more to me than anything. I searched for her, thought of her day and night, but never found her. I gave up on the idea of finding the missing piece to my puzzle—that is until she walked right into my life and I didn’t know what hit me.

A chance encounter brings Luca and Leighton together ten years later at their high school reunion. Will past secrets threaten to destroy their futures, or will love be written in the stars for them just as it was in Leighton’s letters? 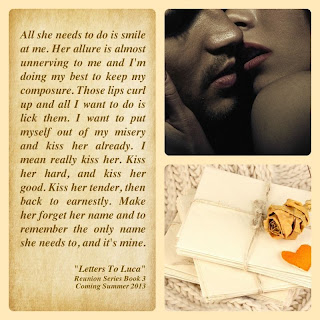 My View
This is the 3rd and final book in the Reunion series (each stand-alone), and believe it or not ‘Reunion’ the first in the series was only ever supposed to be seen by family and friends.  This was then followed by ‘You Belong With Me’ which I have been waxing lyrical about on my Facebook page and Blog to the point where M.R. Joseph may take out a restraining order on me.  Anyhow, I was beyond excited to be asked to take part in the Blog Tour and to review this latest book from the lovely Ms Joseph and well, I sat and read ‘Letters to Luca’ in one Sunday sitting. Dogs neglected, Husband going hungry, ironing ignored.
“Have mercy on my soul dear Lord for I am lustful and needy, and it’s all because of this boy”. – Leighton
Yep that just about sums up how I was feeling 50% in and Ms Joseph can certainly turn up the steam a notch when she wants to.
Each of the Reunion series have been a love story, stories of a lifetime of loving someone that is interrupted by life itself and the timeframes of the books always, to me, make them more believable, as the relationships grow and develop.
Leighton had loved Luca, idolised him from afar, the plain girl unable to tell the high school heart throb of her feelings for him in person and so she wrote him letters.  Letters written so beautifully and from the heart that they captured Luca’s heart & soul without her even knowing it.
“The only thing that got me through those dark times were the letters.  The letters from the woman that could possibly be love of my live, and I have no idea who she is”. Luca
10 years on Luca is settled in his family’s business and Leighton is no longer the plain Jane she once was, but she is in a whole world of hurt and goes back home to lick her wounds.
And bingo they kind of bump in to each other, she still madly in love with him, he mesmerised by this beauty he can’t remember from school.
The POV’s from each of them were fun and I always like a good male POV.  Leighton’s internal musings are totally relatable for us girls.
“He has a runner’s body, built to last, built for fucking sin, and I’ve had that….twice. Yep. Me.  Yay, me!” Leighton
Inevitably there are those characters we would like to hunt down and hurt badly, however once the truth about the letters comes out, Luca’s reaction was not what I expected at all and took me totally by surprise.
No spoilers here so I won’t go in to detail but let’s just say waterproof mascara and tissues are essential.
So if I haven’t made myself clear, I totally, utterly, completely adored this book and I cannot recommend it enough, M.R. Joseph has once again produced a dream of a love story and I will continue to stalk her from afar.
About the Author:


I'm a book enthusiast, turned author, who loves all things "Happily Ever After".


My first book, 'Reunion' debuted in November, 2012. Meant only to be a Christmas gift to my family and closest friends, word got out, and here I am. The second in the series, 'You Belong With Me', released in March, 2013, and the final installment in the series, 'Letters to Luca', will debut August 1st.


Mom and wife by day, writer of contemporary romance by night, I believe in soul mates, true love, and all that mushy stuff. 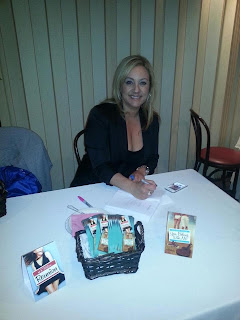