The Rebel Walking Series continues with Taron and Ivy's story, Heaven Sent. The explosive chemistry that these two share ignites a relationship of epic proportions.

He has been dubbed 'the panty stealer', but Taron Walker has his eyes set on the beautiful, full of life, Ivy Adams. Ivy doesn't usually put up with the player type, yet there is something about Taron that has her intrigued. Taron must leave to go on tour with Rebel Walking and Ivy will be left to face serious struggles on her own. Will she reach out to Taron for help, or will she push him away? Can these two find happiness in each other's arms, or will they tear each other's world apart? 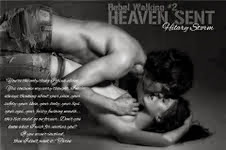 “Hurt her, and I will kill you.”  Eaven’s threat is heard loud and clear.  I have witnessed the bond that these two share, and I know they will always protect each other.  My future sister-in-law is a feisty survivor and I don’t plan to cross her.  She has proven that she will fight for those she loves.
It takes entirely too long to exit the club.  People are everywhere and every time I turn around some girl from one of my past hookups is lingering in my view waiting for the opportunity to ‘meet’ up with me.  I know Ivy can sense what these girls are after because she gets defensive before we get out the door.
“Jealous much?”  I decide the best way to approach this is to be playful and throw her words right back at her.
“Um…. No.  Like I have always said, if you want ‘cock rot’ feel free to play the field, just don’t expect me to hang around.”  She is extremely sassy with that fucking mouth of hers.  It is what I love and hate so much about her equally.  She is a breath of fresh air compared to all of the groupies that I am flooded with constantly.
I have been holding out for Ivy since we started spending so much time together after Eaven’s accident.  “There’s no ‘cock rot’ here.  My dick may fall off from lack of use lately, but I know that I’m clean.  I always wrap it and I get tested regularly.”
I have to protect myself from the lot lizards of the concert scene.  They will agree with everything I say or want to do.  It’s like they are spineless females that expect me to give them a great fuck and then they know the drill.  They head out.  I may hit four girls in the same night if I start at the club.
I haven’t had any interest in any of them lately.  Been there, fucked that.
There is a sexy brunette that has had all of my attention.  I love a challenge.  She acts like she isn’t interested in me, but I know that if she has a taste, she will love it.  I can’t wait to see if that sassy mouth is just as feisty in the bedroom.  If it is, I may not be able to stand it.

Hilary Storm lives with her high school sweetheart and three children in Enid, Oklahoma. She drives her husband crazy talking about book characters everyday like they are real people. She graduated from Southwestern Oklahoma State University with an MBA in Accounting and has a full time job as an accountant. Her passions include being a mom, writing, reading, photography, music, mocha coffee, and spending time with friends and family. She is the author of the 'Rebel Walking' Series.