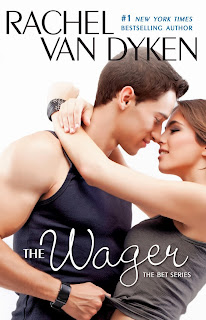 Lose a bet, lose your heart...

What is it about a junior-high crush that can send an otherwise intelligent woman into a tailspin? TV reporter Char Lynn wishes she knew. Jake Titus is too rich, too handsome, too arrogant: a trifecta that once lured Char into the best night-and worst morning-after-of her life. Now they've been thrown together in a wedding party. It's awkward, but survivable . . . until Jake stops acting like a jerk, and starts acting like the man she'd always hoped he could be.

If watching your brother marry your best friend is weird, being attracted to your best friend's other best friend is downright bizarre. Unfortunately for Jake, Char hasn't forgotten how he once tossed her aside. Worse still, Jake's already-nutty grandma is even crazier about Char. Cue meet-cute shenanigans and all manner of meddling, and somehow, Jake's falling. For Char. Now all he has to do is make her believe it . . .


Excerpt:
Dessert was served. Char chose a chocolate soufflé with whipped cream. The minute it was set in front of her, she saw Jake’s hungry gaze.
With a wicked smile she dipped her finger into the whipped cream and slowly licked it clean.
His mouth dropped open, just slightly.
She licked her lips and dipped her finger again.
Jake leaned forward, his eyes almost closing as his half-lidded gaze went from teasing to lustful.
Char wondered when was the last time the player had been played, or that he’d had to actually wait for something.
Carefully, she slipped out of her wedge heels and relaxed a little further down in her seat. Trying to act nonchalant, she took another bite of her dessert and watched Jake watch her. She knew the exact moment her foot came into contact with his leg. With a jerk, he grabbed the edge of the table and cursed.
“Everything all right, Jake?” Petunia asked, examining him through her glasses.
“Perfect,” he said in a strained voice. “A bit hot.” His hooded eyes blinked a few times before he reached for his water glass and took a long sip.
“It is quite humid out.” Petunia fanned herself. “But you look positively flushed. Are you sure you aren’t coming down with something?”
“I wish,” Jake said.
“Pardon?” Her brows furrowed.
“Pretty dish.” He pointed to the butter dish in the middle of the table.
Char bit her lip to keep from laughing; she took another slow bite of soufflé and licked her fork. Jake groaned across the table.
Her foot came into contact with his skin.
“Mother of—”
“Jake?” Petunia shook her head. “You have me worried.”
“Me too.” Char licked her lips and let her foot inch up his leg.
Jake braced both hands on the table, his eyes setting her on fire with how hard he was staring at her. “I’m sure.”
His eyes closed as she rubbed up and down his calf and then braced his one leg with both of hers, jerking him closer to the table.
“Shit.” He exhaled.
“I beg your pardon!” Petunia scolded. “Jake Titus, you stop your filthy language.”
“He’s such a dirty, dirty, boy,” Grandma agreed with a wink.
Jake groaned, his eyes pleading with Char to either stop or keep going and kill him right then and there.
“You know what happens to dirty boys,” Char said helpfully.
“What?” His voice was hoarse.
“They get spanked,” Petunia spat. “Hard!”
Jake swore a blue streak.
“Wescott!” Petunia demanded. “Please control your son! It seems he keeps having urges to use foul language at the dinner table! Well, in my day we’d send boys to their rooms if they did such a thing.”
“Fine.” Wescott rolled his eyes. “Go to your room, Jake, take your punishment like a man.”
“I, uh…” Jake sputtered. “Should probably stay right here.”
“You heard your father.” Petunia shook her head. “You need to be punished.”
“Please.” He whimpered and hung his head in his hands.
“Jake…” Char pulled her foot away and leaned forward. “You should probably listen to your father. Wouldn’t want you getting into any trouble… go to your room.”
“I can’t,” he said through clenched teeth.
Grandma pushed to her, feet knocking an entire pitcher of ice water into Jake’s lap. His eyes bulged out of his head as she leaned over so only he and Char could hear. “You’re welcome.”
“I want to die.” This from Jake.
“You clumsy boy, go change your pants,” Grandma ordered. “Char, why don’t you get us some more water from the kitchen?”
She didn’t have to be told twice.
Cursing, Jake threw down his napkin and chased after her.
Shoes off, she was able to run across the grass. Once she was in the house she stole a glance behind her. Jake was gaining on her. The look on his face was predatory.
With a squeal she ran up the stairs to the bedroom, just as his strong arms came around her, pushing her farther into the room.
“Naughty girl. I’ll make you pay for that.”
She turned in his arms and licked his chin like she had her soufflé. “You promise?”
“Strip.” He released her and walked over to the bed, slowly sinking down into it. “Now.”
“Demanding.” Char put her hands on her hips. “Aren’t we?”
“Yeah.” Jake leaned back on his elbows. “The way I see it, you owe me. Not only did I do a naughty dance for you, with chaps might I add, but you made me suffer through dessert, while my great aunt, the virgin one, you know her, told me I needed to be spanked.”
Char laughed.
“Not funny,” Jake groaned. “Most awkward moment of my life.”
“Before or after Grandma cooled you off?” Char asked.
“If you want me to be able to perform, ever, you won’t mention that again.” Jake swore.
Char fumbled with the straps of her dress. “I remember.”
“Remember?” Jake’s eyes were trained on her fingers as she toyed with the straps pulling them further down her body. “What do you remember?”
“Us.” Char let the dress fall to the ground and stepped out of it. “I remember our night together. I lied. I told Beth I didn’t. I told you it wasn’t good. I was just trying to make you feel bad.”
“Hmm.” Jake stood and slowly approached her. “I deserved it.”
“I know.”

"I have a proposition for you." Kacey should have run the minute those words left Seattle millionaire Jake Titus's mouth. It's been years since Kacey's seen her childhood friend Jake, but the minute Jake mentions his ill grandmother, Kacey is ready to do anything for the sweet old woman. And if that means pretending they're engaged for her sake-so be it.

But Kacey wasn't counting on Jake's older brother Travis still being there. She calls him "Satan" for a reason: she's never forgotten the way he teased and taunted her. Yet when they meet again, Travis's gorgeous smile is a direct hit to her heart . . . and Kacey's more confused than ever. As the days pass, only one thing starts to become alarmingly clear-she never should have accepted Jake's deal . .

Rachel Van Dyken is the New York Times, Wall Street Journal, and USA Today Bestselling author of regency and contemporary romances. When she's not writing you can find her drinking coffee at Starbucks and plotting her next book while watching The Bachelor.
She keeps her home in Idaho with her Husband and their snoring Boxer, Sir Winston Churchill. She loves to hear from readers!
Website: http://rachelvandykenauthor.com/
Facebook: https://www.facebook.com/RachelVanDyken?sk=wall
Twitter: https://twitter.com/RachVD
Goodreads: http://www.goodreads.com/author/show/4882127.Rachel_Van_Dyken