An independent woman, a controlling man, and one wild one-night stand…

Kat Kennedy moved to the rugged coast of Maine to start a new life, but encountered much more than she bargained for in dark, dangerous, and seductive Lane Wild.

Desire and temptation smolder before she succumbs to her darkest fantasies with the captivating stranger. She doesn't expect to see him again after an explosive one-night stand leaves her breathless and craving more, but just like lightning in the darkness, he shows up in her life at the most unpredictable moments.

A sensual game of cat and mouse ensues before the attraction between them reaches a fever pitch—the magnetism combustible, the sexual tension nearly unbearable—and Kat finally abandons inhibition and explores the cunning, selfish, and sexual side of a world she's never known.

They have the perfect non-relationship—passion-fueled nights with no strings attached—until life gets real and the past and present collide in a dangerous storm of lust and obsession. 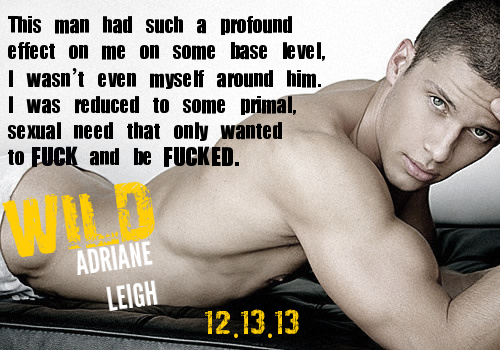 Holy mother of god!!!  This book is just WOW!!!!! Absolutely amazing.  As soon as I started reading it, I couldn’t put it down. Everything else got abandoned until I had finished it.
First off let’s just say the title is very fitting. This book is exactly that. It’s ‘Wild’, raw, intense.  A whole rollercoaster ride of emotions that will leave you feeling breathless and very hot under the collar.  Definitely a book that you don’t really want to read in public places.

Kat wants to escape the life she once lived, so decides to up and move to a small coastal town in Maine, to start a fresh.  It’s here, in the towns bar, she first meets the dirty-talking, hot as fuck Lane Wild.  And when I say ‘meets’ what I really mean is ends up going back to his.

“I hadn’t been looking for a hookup but after keeping to myself for so long, and the way his eyes sparkled when he looked at me, that sexy grin tipping his features, I’d thrown caution to the wind and landed beneath him with my legs spread.”

She thought she’d be able to forget about the scorching one night stand she had, oh but how wrong was she?  With it being such a small town, it was obvious she would keep running in to him.  But what she didn’t realise was just how much of an effect he would have.  She couldn’t stop thinking about him, the spark between them was palpable and her body reacted to him in a way she wasn’t used to.

“His thumb dragged across the seam of my lip. M eyes fluttered closed as he swiped across the flesh. My body lit up with lust and a dull throb settled between my thighs.”

And found herself acting differently to who she was.

“This man had such a profound effect on me on some base level. I wasn’t even myself around him. I was reduced to some primal, sexual need that only wanted to fuck and be fucked.”

Lane Wild. Oh My Fucking god.  He is just that, ‘Wild’. Cocky, confident, straight talking and has such a dirty mouth.  He doesn’t do relationships, at all...he fucks. And oh he does it in the most animalistic way. In the bedroom, against the wall, in the bar, doesn’t really matter to him as long as he gets his fill. That is until Kat Kennedy comes along. Then you see a different side to him. You see his caring side, his protectiveness and his gentleness.

With them both being dead set against relationships, they’re “friends with benefits” plan is perfect for them.  However you know that’s bullshit. Adriane tells the story in both POV’s so you know that they are both getting under each other skin. They’re connection is undeniable. They’re need for one another explosive as well as the heat between the sheets.

“Lane was owning me. Whether I liked it or not, he’d taken me places I’d never even imagined and I loved every second.” ~ Kat

“That was it. I’d gone soft for this girl. I’d willingly tucked my balls right in her fucking purse and given them to her with a smile on my face. I was a certified pussy.” ~ Lane

Kat holds her personal life very closely guarded and evades answering any questions about it. She’s strong, independent, courageous and very sarcastic, especially when it comes to Lane.  You know she’s running from something. Escaping her past. But, what could be so bad that has her running?

I loved seeing Kat and Lane’s story unfold. It was anything but smooth for them.  Adriane keeps you guessing through the entirety of the book about what it is Kat’s hiding. And only gives you tiny tidbits of information here and there.  But let’s just say it still doesn’t prepare you for the shit storm that happens in the last 30% of the book. Its nail biting, cold and brutal.  Adriane really didn’t hold back there.

The best thing about the ending of this book?  There is no cliff-hanger. Yay!!! And it can be read as a standalone.

The second book is going to be Lane’s brother, Ridge’s story. I can’t wait to get my hands on it.
I have definitely found myself a new BBF with Lane!!!
Just go now and buy it. Believe me.  You will not regret it.

WILD is on SALE!
99¢ Reader Appreciation SALE for ONE WEEK ONLY!!

Adriane Leigh was born and raised in a snowbank in Michigan's Upper Peninsula and now lives amongst the sand dunes of the Lake Michigan lakeshore.
She graduated with a Literature degree but never particularly enjoyed reading Shakespeare or Chaucer.

Adriane is married to a tall, dark and handsome guy, plays mama to two sweet baby girls, and is a voracious reader and knitter.