Brooke has spent the past eleven years living with a man she thought would be her forever. One afternoon of unanswered phone calls reveals he isn’t the man she thought he was.

Just when things couldn’t get any worse, she’s forced to call upon a stranger for help.

Can Dylan save Brooke from her broken past or does he have secrets of his own that will destroy them before they even get started?

Dylan had received a peculiar phone call from the governor, leaving me stranded and alone in his magnificent penthouse.  The events of the evening draining me free of any energy I had left.  I wanted to ask where he was going, but I had a gut feeling I knew the answer to that question.  It was his job to clean up a scene before anyone found out the gruesome details of a crime.  Then again, I found myself curious, wondering if Dylan himself had manufactured the hit on Amber Martinelli to frame Stefan.
I stepped out onto the terrace overlooking the city.  The lights were bright, twinkling as the roar of late night traffic lingered in the air.  A cold front was moving in and a slight chill moved through me.  Knowing how Dylan felt about me, I knew he would do anything to keep me safe.  Committing murder wasn't beneath him and it was dangerous for me to think that he could be involved in Amber’s.
Goodreads
or
https://www.goodreads.com/book/show/18634735-promiscuous?from_search=true 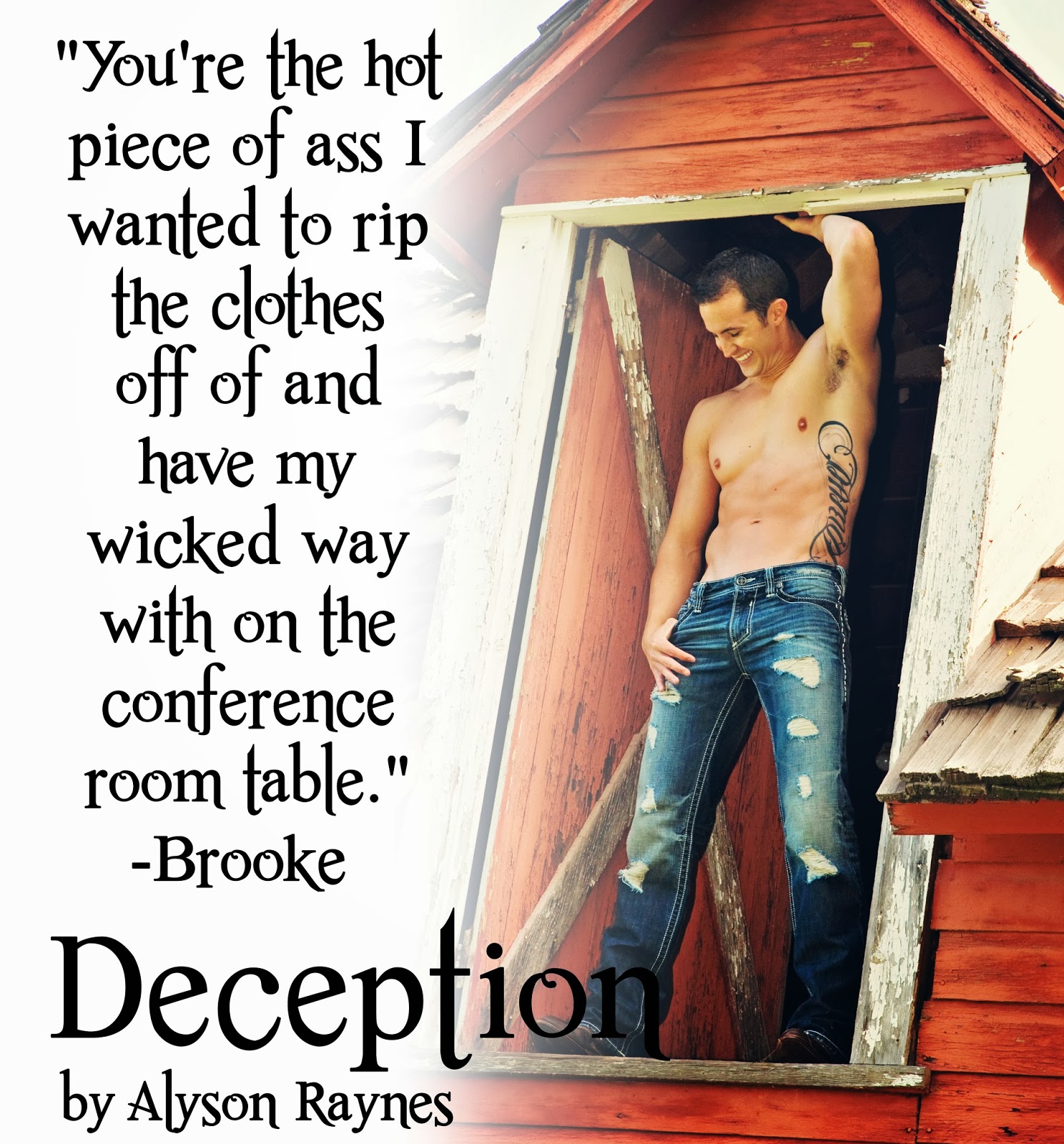 Excerpt
We were interrupted by a knock at the door. I was both relieved and irritated at the same time. I suppose it was a blessing that someone had interrupted us because I wasn't sure how much longer either of us was going to last without some kind of physical contact. I needed to find some distance between us because I was beginning to lose all of my self control when it concerned Dylan Prescott. - (Deception)

Excerpt
"Well...bitch! I may be trash but I'm nothing like you. For starters, when someone says it's over, it means it's over. It doesn't mean you continue to call them, stop by their house or continue to try and seduce them. You see Misty, Dylan is a lot nicer than I am, so I'll put it in a language that you can easily understand. You're a whore Misty. You'll stick your mouth on any cock that's put before you, just so you can climb your way to the top of the corporate ladder. That's right, I've heard all of the office talk about you and seeing how you parade around like a piranha with Dylan, I know it's true. Now get the fuck out of my room so I can finish fucking my fiance!" (Promiscuous)


‘Deception’ is the first book of a new series by Alyson Raynes.  Previously released as ‘Fixer of Deceit’ it has come back with a new title and new cover, and I must admit I like the change.
I can’t really go into detail with this review without giving too much away. I did find it slow and hard to get into to begin with, but I continued to read as I wanted to know how the book was going to turn out. And I’m glad I stuck with it. The more I read, the more I fell in love with the story and with the characters.

Brooke couldn’t be happier with her life. She had her boyfriend of 11years by her side and had just landed the job of a lifetime at Prescott Oil and Gas International.  It was here that she met Dylan Prescott.  As soon as she met him, she could feel the energy igniting between them but tried to ignore it.

“Oh yeah, I remember you. You’re the hot piece of ass I wanted to rip the clothes off of and have my wicked way with on the conference room table”.

But, her loyalty to her boyfriend is admirable and she doesn’t do anything to jeopardise her relationship. However, unfortunately, her boyfriend doesn’t share that loyalty and in the blink of an eye Brooke’s world comes crashing down around her.  She has no idea what to do, so she turns to the only person she can think of...Dylan.

Dylan is gorgeous, oh so gorgeous, A competing body builder and just sexy as hell. He starts out as Brooke’s co-worker and after working closely together with her over the course of a year become friends.  After he gets a phone call from Brooke, he becomes her protector, and shows that he will do whatever it takes to protect her and keep her safe.

“You are not going back to your apartment and you are not moving in with your friend today. You are coming home with me where I can ensure that you won’t be killed within the next twenty-four hours!”

It’s there safely in his apartment she knows that the attraction between the two of them won’t go unnoticed. It’s just too strong and undeniable how they feel for one another.
But danger comes looking for Brooke and stops her from moving on with her life.
The book is full of twists and turns that will leave you with your mouth hanging open and asking yourself ‘What is going to happen next?’

Yes It’s a short story, which I was able to read in one afternoon, but don’t let that deter you. It was jam-packed full of action, suspense, and drama that will keep you turning the pages until you get to the end.

The reason I could only give it 3.5 stars. I thought at times things were a little rushed and I got a bit confused thinking I had missed out parts.  But, I still enjoyed the book and I’m going straight on to read ‘Promiscuous’.

Brooke and Dylan’s story continues in the second book of the Fixer series. And right away you are pulled back into their world full of mystery, suspense and drama. Only this time it has gone to a whole new level.
Brooke and Dylan are trying to get on with their lives together as a new couple as much as possible. And nothing seems to be going wrong. Their love for one another is undeniable and they are just perfect for each other. You can feel that love through the pages and can’t help but smile with them.

“I’ve never loved anybody as much as I love you. My hands ache to touch you, to feel you. When I’m not with you, I feel like the other half of my soul is missing, I want you every minute of every day. I think of no one but you and for the first time in my life; I know this is right”. ~ Dylan
“He was my rock, master of my heart, keeper of my soul”. ~ Brooke

But danger is continuing to stalk Brooke with no closer to finding out who the culprit is. People are not who they seem to be.
Will they be able to find out who it is before it’s too late?

Just as you think you have it all worked out...Bang!! Alyson spins you in another direction, leaving you completely speechless, gawping open mouthed at your kindle and thinking ‘what the fuck??!!!’
Yes there are still a few rushed bits but not as much as there was in ‘Deception’. And I would’ve loved to learn more about Brooke’s family and past. But, I enjoyed this book so much more and really can’t wait for the third book to come out.

A Colorado native, Alyson loves to travel. She has visited Ireland, Mexico and most of the United States. Her favorite vacation hideaway is Hawaii. She has a love for the ocean and enjoys swimming with sea turtles in the wild. Alyson is a former accountant who has traded in her abacus for a full-time writing career.