Once upon a time, girl met boy and a love story began.
Their future was assured until tragedy struck and deceptions were made.

There are consequences to every action, and the Consequences of Deception are always the most punishing.

Sloane Evans lost nearly everyone that she’s ever loved, but losing Killian Brandt left a scar that never healed.

Four and a half years after turning his back on her, Killian steps back into Sloane’s life in the most shocking of ways, giving her no choice but to abandon her life and go with him.

Why would a man buy a woman that he hates?

Not everything is as it appears.

Love is beautiful, revenge is ugly, and lies destroy lives.

A horrifying suspicion takes root in my head and a wave of dizziness sweeps through me as I realize that there is only one possible reason that he is here. The only explanation that makes sense is that he wants to be the one to throw me out into the street. Somehow he’s in control of Stephen and Celine’s house, and I just bet he’d done whatever he had to do to get himself into this position. Four and half years he’d been waiting for a shot at me, and now he has it.

“You’re… throwing me out?” I try, damn hard, to keep from breaking down. The tears I keep at bay, but there is a definite warbling of my voice as I ask the question.

Immediately I am angry with myself for showing such weakness and I decide to take the bull by the horns. I am not about to give Killian Brandt, of all people, the pleasure of seeing me break, even though I have to admit to myself that I am definitely breaking. I plow on before he can answer my ridiculous question.

“What am I saying? Of course you’re throwing me out! I’m sure this has to be one of the best moments of your miserable life, you selfish son-of-a-bitch. You want me out? Consider me gone!”

I jump to my feet to go call Demi, only to come to a dead halt when Killian thunders out a command. “Sit your ass down,now.”

I am so shocked by the force behind his words that I immediately drop back onto the couch. I don’t actually fear Killian, but my response to his tone of voice is instantaneous.

For one moment, I allow myself to hope that maybe Killian isn’t here to ruin my life. Maybe, just maybe, he isn’t as bad as I think he was.

“I’m not kicking you out, Sloane. I’m buying you.”

Whatever I thought before? It was all too generous. Killian just turned my life upside down with nine life-changing words.

It hangs out there between us as I gape at him while I try to formulate a response. “Buying me…? This proves that you’re insane! I’m not a commodity. What exactly can I do for you, Killian? Be your maid?”

The look he gives me is a lot like a warning and instinctively I know that whatever he says next isn’t going to be good.
“No, you’re going to be my lover.” 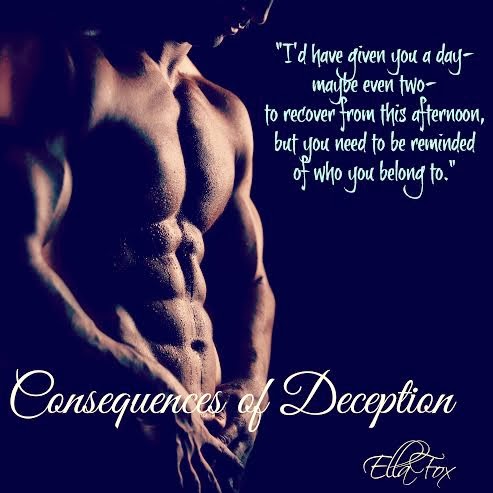 When she’s not writing, Ella indulges the gypsy in her blood and travels the country. Ella loves reading, movies, music, buying make-up, reading TMZ, Twitter and pedicures… not necessarily in that order. She has a wild sense of humor and loves to laugh. Her favorite thing in the world is hanging out with her family and watching comedy movies.

I’ve not read a book by Ella Fox before – what a mistake – she’s now completely on my TBR !

This book gripped me from the very start.  Life was good for Sloane and was about to get better as the love of her life Killian had promised her when she turned 18 they would be together.

Fast forward 4 and a half years and her life is somewhat different.   I spent the next few chapters trying to work out what had gone wrong (as I am impatient) but no….Ella will only unweave this tale as she sees fit! I actually loved the suspense and the story unraveling, never quite guessing the next stage until I came upon it.

He’s been hurt and has a wall around him a mile high, he wants to let Sloan in but doesn’t trust her, or anyone, so he tries to claim her instead.  Going against all of her instincts Sloan fights but can’t resist the lure of her first and only love.

“No one else gets this. You’re fucking mine, Sloane, and I’ll kill anyone that tries to touch you. You belong to me”

Little do they know that the last 4 years they’ve been apart has been caused by a web of lies and deceit and the consequence of this deception may not be just their relationship but their lives.

The 2nd half of the book you literally need a seat belt! Buckle in readers, this is one hell of a ride. I’m sad to say I read this book in one sitting, sad because I’ve finished it now…..ashamed – no way!!!!