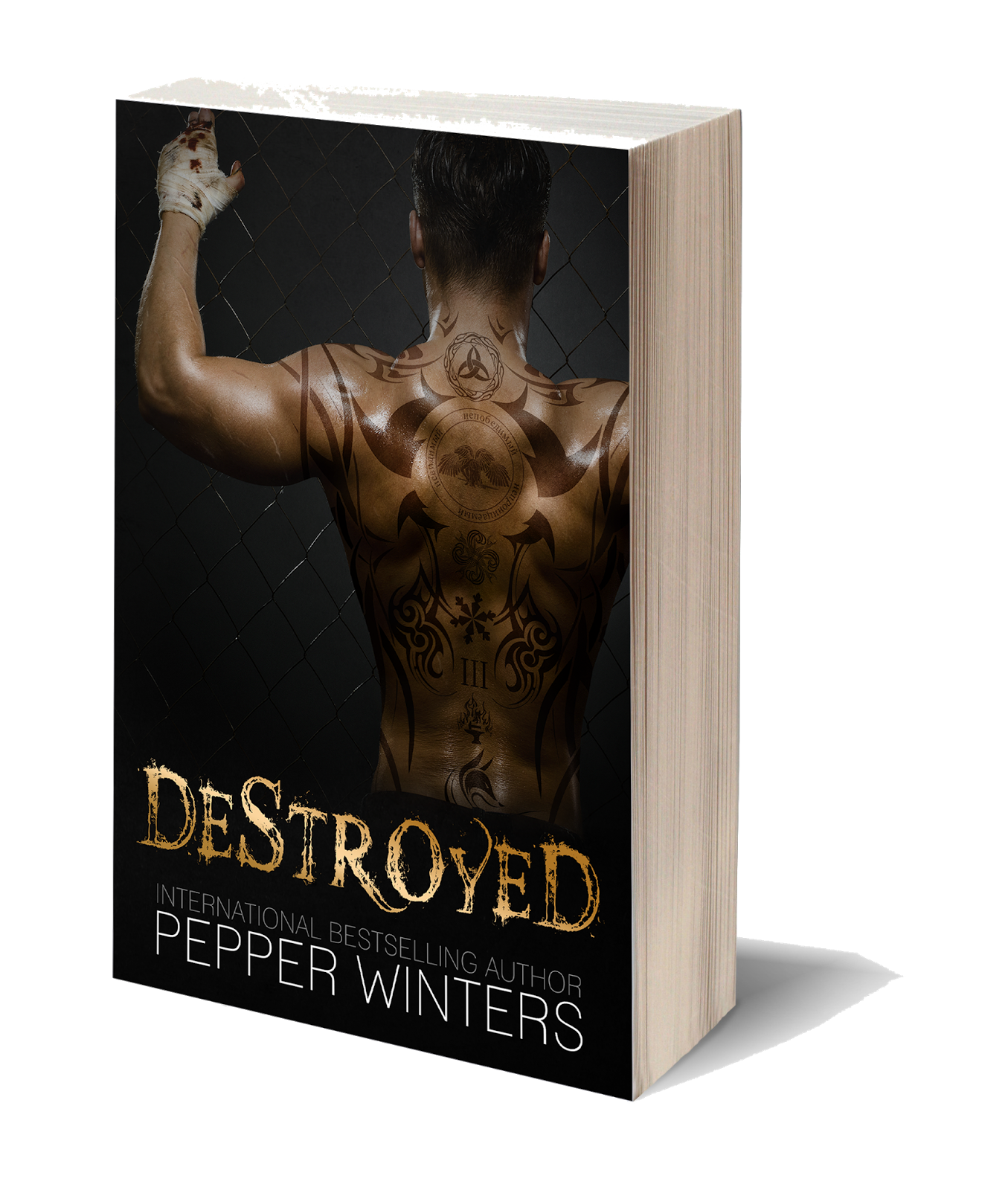 She has a secret.I’m complicated. Not broken or ruined or running from a past I can’t face. Just complicated. I thought my life couldn’t get any more tangled in deceit and confusion. But I hadn’t met him. I hadn't realized how far I could fall or what I'd do to get free. He has a secret.I’ve never pretended to be good or deserving. I chase who I want, do what I want, act how I want.I didn’t have time to lust after a woman I had no right to lust after. I told myself to shut up and stay hidden. But then she tried to run. I’d tasted what she could offer me and damned if I would let her go.One secret destroys them. 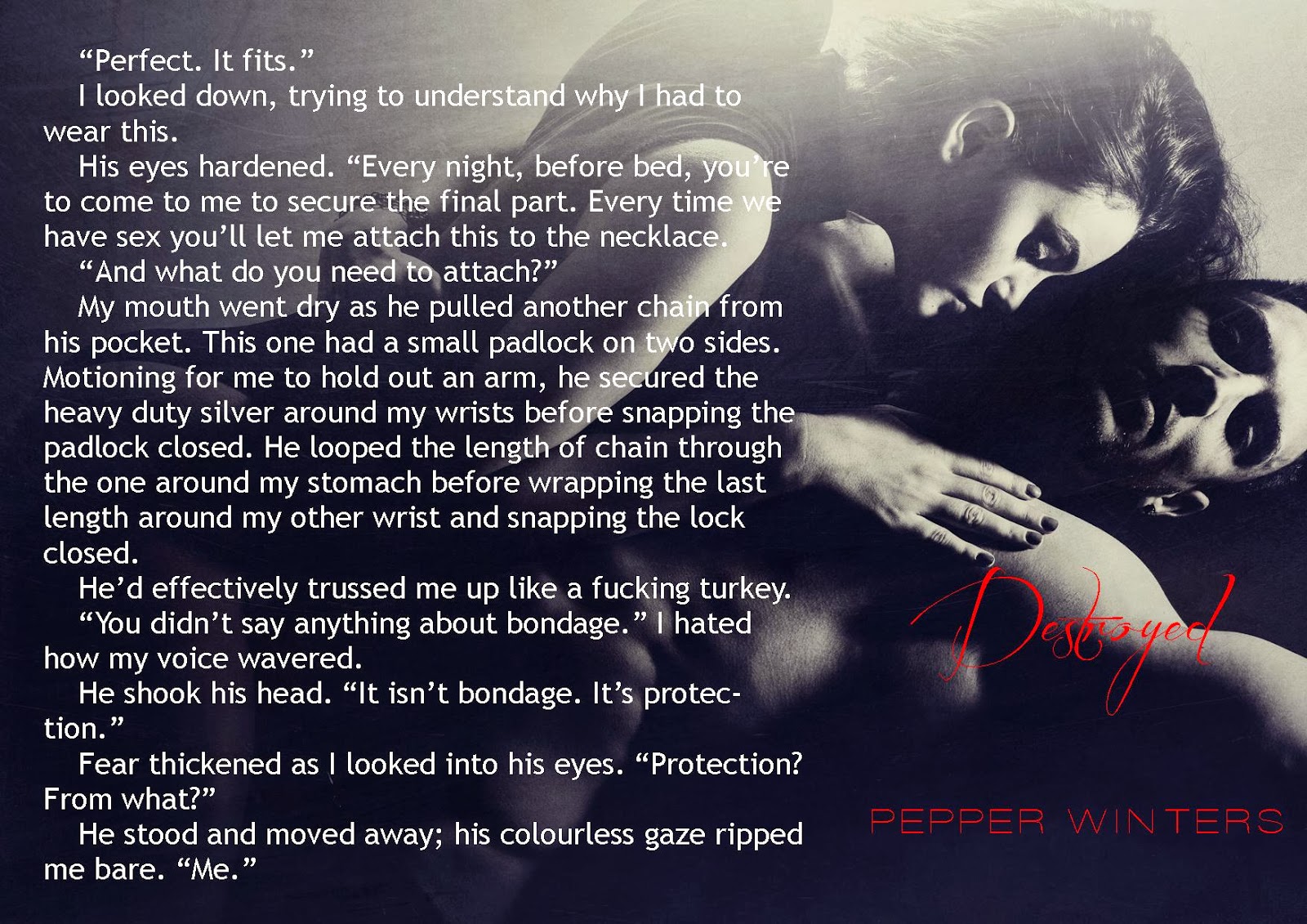 "I wasn't the handsome knight who won the girl--I was the scarred troll whose only purpose was to be killed."

Wow...just wow!!!!!
I can't even begin to think of the best word to describe this book. It's amazing...a work of art and just utterly brilliant!!!

I absolutely love Pepper Winters. And after reading her Monsters in The Dark series I honestly didn't think she would be able to deliver another dark yet captivating book. But oh, how wrong was I!!! Pepper has completely blown me away yet again with her ability to suck me in to her world. Her uncanny ability to make you feel everything with just words is awe-inspiring, and her attention to detail in the descriptions that allow you to picture the scene perfectly; believing that your there really is masterful.

From the very first page Pepper drags you in to the world of Fox and Heather and refuses to let you go. You tell yourself "right, I'll just finish this chapter and stop for the night", only to carry on and completely lose yourself to the story, not being able to stop reading until you reach the end.

Hazel would do anything for the ones she loves, and after receiving some news that could shatter her life as she knew it, decides to take matters in to her own hands instead of waiting around for fate. Accompanying her best friend to an illegal club called Obsidian, Heather/ Zel is out of her comfort zone, but knows it's something she needs to do to try and save the ones she loves. It's here she meets the owner --Obsidian Fox.

"Something about him unsettled me--further amplified by the force of danger he possessed. I wanted to keep my distance, but was drawn to him nevertheless."
"The moment his eyes fell on me, I'd felt a shift. A spark. An awareness. Call it fear or acknowledgement of a virile male, it caught me surprise. My entire body shot into hyper alert--heart racing, breath quickening. My body prepared to either fight or flee."

Obsidian Fox, a man left completely broken, damaged and stripped of humanity from a past that nobody would wish for. He was conditioned not to be touched or to touch. "To be inflicted meant to inflict. Touch meant to kill". To love or to be loved. He was a ghost, Invisible, Impenetrable, Invisible.....That was until he set his eyes on Heather.

"Women meant nothing to me. I neither wanted them nor needed them. But the instant my eyes landed on thick mahogany waves draping over porcelain shoulders, I wanted with a ferocity that I'd never felt before."

The spark between them was instantaneous. They were drawn to each other.

"I never touched anyone voluntarily unless it was in a fight. It just wasn't done. My entire life I'd avoided every iota of touch and contact. And yet the instant I wrapped my fingers around her arm, my entire body shuddered with some unseen power filtering from her to me."
"It intoxicated me. It bewitched me. It fucking scared me."

But they both have secrets. Secrets which they're hell bent on keeping from each other. They are slowly revealed to us throughout the book and you do get to know the answers to you questions. But, you still find yourself asking 'just who is Obsidian Fox/Roan?' And to be honest, I don't think you really find out who he is until the end. Even then, there are things you don't fully know, about Heather or him. But, as Roan says "nothing in our past mattered" "we'd come into this relationship hiding who we truly were and found a new identity in each other." It couldn't be more than the truth or more perfect.

'Destroyed' is the story of two broken souls coming together in the most unexpected way. Forming an inescapable, soul deep bond.

"No one had made me feel like Zel. No one held me hostage like Zel. She'd successfully done in ten minutes what I'd tried to do in two years. She brought me back to life."

Trying to heal one another.

But...
Will they be able heal each other? Or will the secrets be too much and destroy them? You're just going to have to read to find out.

"My trials in life had taught me nothing lasted forever and the best things were fleeting--treasures to be enjoyed for however long they lasted before they were gone." ~ Heather

This truly is an amazing book. One that has crawled in to my heart and that’s where it will stay.
Bravo Ms Winters for once again delivering an unputdownable, soul-clenching book so full of raw emotion and showing us why you are the queen of darkness!!!

Pepper Winters wears many roles. Some of them include writer, reader, sometimes wife. She loves dark, taboo stories that twist with your head. The more tortured the hero the better and she constantly thinks up ways to break and fix her characters. Oh, and sex… her books have sex.

She loves to travel and has an amazing, fabulous hubby (who speaks French—hot!) who puts up with her love affair with her book boyfriends. She loves to hear from her readers so hit her up at pepperwinters@gmail.com

1 x signed swag pack of Monsters in the Dark