**Blog Tour** Picking up the Pieces by Elizabeth Hayley 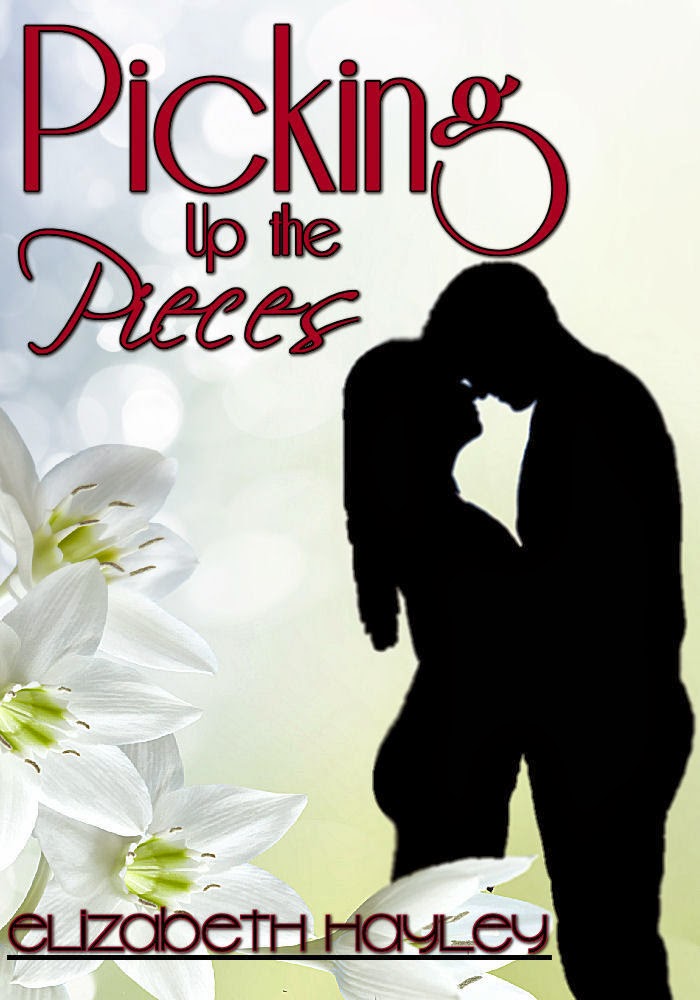 After a myriad of mistakes and a devastating breakup, Lily Hamilton is no longer the impulsive, selfish person she had once been. Now, she longs for the chance to make it up to the one person she knows holds the key to her happiness. But can he get beyond who she was and love her for who she is now? Or is history destined to repeat itself?
Adam Carter has gone through his own metamorphosis. His days of serial monogamy are long gone, and he's been burying his hurt by dating women he has no intention of committing to. But when he sees Lily for the first time in months, he's reminded of the man he used to be; the man he wants to try and be again--for her.
Max Samson is on the downward spiral from hell. Drinking and meaningless sex have taken over his life once again, causing him to revert back to the man he'd been before Lily fell into his life. But when his mother invites Lily back into his world, he suddenly remembers how good it felt to have her there. Even if he might not get to keep her.
Find out how Lily gets her happily ever after in this final installment of her story.  This book is recommended for mature audiences due to language and unbelievably awesome sexual content.

Elizabeth Hayley is actually "Elizabeth" and "Hayley," two friends who love reading romance novels to obsessive levels. This mutual love prompted them to put their English degrees to good use by penning their own. The product is Pieces of Perfect, their debut novel. They learned a ton about one another through the process, like how they clearly share a brain and have a persistent need to text each other constantly (much to their husbands' chagrin).

"Elizabeth" lives with her husband, one and a half year old daughter, and nutjob of a dog. “Hayley” lives with her husband and their own crazy dog. They are hoping to adopt a newborn soon.
Elizabeth Hayley's writing motto is best captured by the words of Patrick Dennis: "I always start with a clean piece of paper and a dirty mind."

PLAYLIST
“Alive” by Krewella
"All of Me" by John Legend
“Arms” by Christina Perri
"Baby Come Back" by Serena Ryder.
"Between the Raindrops" by Lifehouse ft. Natasha Bedingfield
"Big Girls Don't Cry" by Fergie
“Bless the Broken Road” by Rascal Flatts
"Breakeven" by The Script
“Breathe (2AM) by Anna Nalick “Endlessly” by Green River Ordinance
"Broken" by Seether ft. Amy Lee
"Can't Let Go" by Landon Pigg
"Crazy for This Girl" by Evan and Jaron
“Days That We Die” by Loudon III Wainwright
“Hard to Love” by Lee Brice
"Hold On" by Colbie Callait
"Here's to Us" by Halestorm
"I Can't Make You Love Me" by Bonnie Raitt
"I Choose You" by Timeflies
“(I’ve Had) The Time of My Life” by Bill Medley & Jennifer Warnes
“I Want Crazy” by Hunter Hayes
"King of Wishful Thinking" by Go West
"The Lazy Song" by Bruno Mars
"Leave Out All the Rest" by Linkin Park
"Leave the Pieces" by The Wreckers
“Let Her Go” by Passenger
"Love Me Again" by John Newman
“Lying to You” by Keaton Henson
"The Man" by Aloe Blacc
"Need You Now" by Lady Antebellum
"Nobody Knows" by The Tony Rich Project
"Not Over You" by Gavin DeGraw
"Now That We Found Love" by Heavy D
"The Reason" by Hoobastank
“Say Something” by A Great Big World & Christina Aguilera
"Scars" by Papa Roach
"Second Chance" by Shinedown
"She Ain't You" by New Hollow
"Unconditionally" by Katy Perry
“Whatever It Is” by Zac Brown Band
"What Hurts the Most" by Cascada
“Wake Me Up” by Avicii

I discovered Elizabeth Hayley last October when I was asked to review Pieces of Perfect and I fell in love immediately with Lily, Max AND Adam and their crazy situation.

I actually facebook inboxed them declaring them an evil pair of writer ladies after the teaser that was written into the end of Sex Snob. I NEEDED to know who Lily had ended up with.....needless to say they just laughed at me......

So I had to read it....what a chore ;-) - Once again these ladies had me laughing out loud and a little cross as Lily once again struggles between Max and Adam.

Adam is stronger now, he wants Lily without a doubt but not at any cost and he's just not sure that he can get past her cheating.......
Max is a little broken, trying to put his life back together without Lily, taking a job and finding a girlfriend, but she's not Lily and he's not sure that she will ever take her place.
Lily doesn't know her arse from her elbow because, not so deep down, she loves them both.

These ladies keep you guessing all the way though the book, will she end up with Adam or Max, who is actually best for her, and who is she, best for? Maybe she won't end up with either????

Chapter 17: Max
And for some reason that thought calmed me, comforted me even. That ten months ago at nearly this very minute, I could have been doing this exact same thing: eating lunch across from Lily as we talked to each other about how our day had been so far. Or at least we would be doing this exact thing if she ever friggin' got here?
I had just looked down at my watch for the twentieth time when I heard the jingle of the bell on the door. And as I watched Lily stroll confidently toward me, I felt a stupid grin creep across my face. Her black pants fit tightly to her legs, and my gaze traced the length of them before it made its way up to those eyes that I always loved so much. Eyes that I loved even more on days like today, when the sunlight brought out the specks of gold in them that I was sure she’d never even noticed herself.
“Hey, Max,” she said as she pulled the silky strands of chestnut hair around the back of her neck to rest on the front of her shoulder. The sweet smell of her coconut shampoo washed over me, waking me from my trance. “I’m happy you asked me to meet.”
“You are?” Not only was I excited to tell Lily about the job opportunity, I was even more excited at the idea that she seemed eager to see me.
“Yeah, I haven’t seen you in a few weeks, and a lot’s happened.”
She paused for a minute or so to peruse the menu, and I motioned for the waitress to come take our order once Lily seemed ready. I knew she had to be back in about forty-five minutes and didn’t want her to be late. “So what’s up?” I asked. I could tell she was in an unusually upbeat mood, and I was eager to find out why she was so happy.
I didn’t know what I expected her to say. Maybe she’d won the lottery. Or she’d gotten a new puppy. Was it possible that she’d just found out Christmas break was starting a week early? Whatever it was, I hadn’t seen Lily that excited in as long as I could remember. I only wished that when she started to speak, I could have maintained my excitement for her. Or at least faked it better than I had.
But the moment I heard Adam’s name leave her lips, I felt my face drop. Trying to think of anything else than what she was saying, I did my best to tune her out. Unfortunately, my best wasn’t good enough. As hard as I tried, I couldn’t help but hear at least some of the words.

Just then, the buzzer rang. I walked over to the intercom and held down the button. “Hello?”
“Hey, Lily. It’s me.”
I could hear the smile in his voice. It made me melt a little. “Me who?”
“Uh, hopefully the only guy you’re expecting tonight.”
Even though his voice was playful, I immediately regretted teasing him when I heard his response. I wondered if his mind had traveled where mine did: to the fact that there had been times when he hadn’t been the only guy who had made visits to my apartment. Dropping my head slightly, I tried to compose myself quickly before I replied. You’re not that girl anymore. You won’t fuck up this time. I lifted my head and interjected happiness into my voice. “I’ll be right down.”

Chapter 21: Adam
“Mine? I’m sorry, I didn’t know I needed your fucking permission to date someone.” I shook my head, keeping my eyes locked on his. Arrogant prick. “When was she yours to give away? Did I miss something?” I stepped closer, ready to make good on my promise of pummeling him in my yard. My eyes darted quickly toward a few of my neighbors’ houses as I wondered briefly if I could pull an Edward Norton, Jr. and curb this asshole without anyone noticing.
“Look, you have every reason to be upset. I—”
“I’m not ‘upset'. I . . . I don’t know what I am.” I could feel the anger building inside me as I ran my other hand through my hair, exasperated and unsure of what to do next. “You know . . . I don’t even know why I’m trying to explain my emotions to you. You deserve nothing.” My teeth clenched, and I suddenly found myself two inches from that douchebag’s face in an effort to keep my voice down. "You. . . you're . . . God, you're not even worth it," I growled as I waved my hand toward him dismissively.
“I’m not gonna argue with you about that. What happened was my fault. But I still want you to know why I did it.” Max’s initially guarded posture softened slightly, and it was clear he wouldn’t fight me even if I wanted him to, so for some reason—chalk it up to pure curiosity—I let him continue. “I loved her. We’re more alike than you think, Adam . . . me and you. I loved her. Just like you did. But she didn’t love me then and she doesn’t love me now. I know nothing I can say will make you change your opinion of me. But I was hoping,” he hesitated, “that it might make you change your opinion of her.”