**Blog Tour** When The Sun Goes Down by Erin Noelle 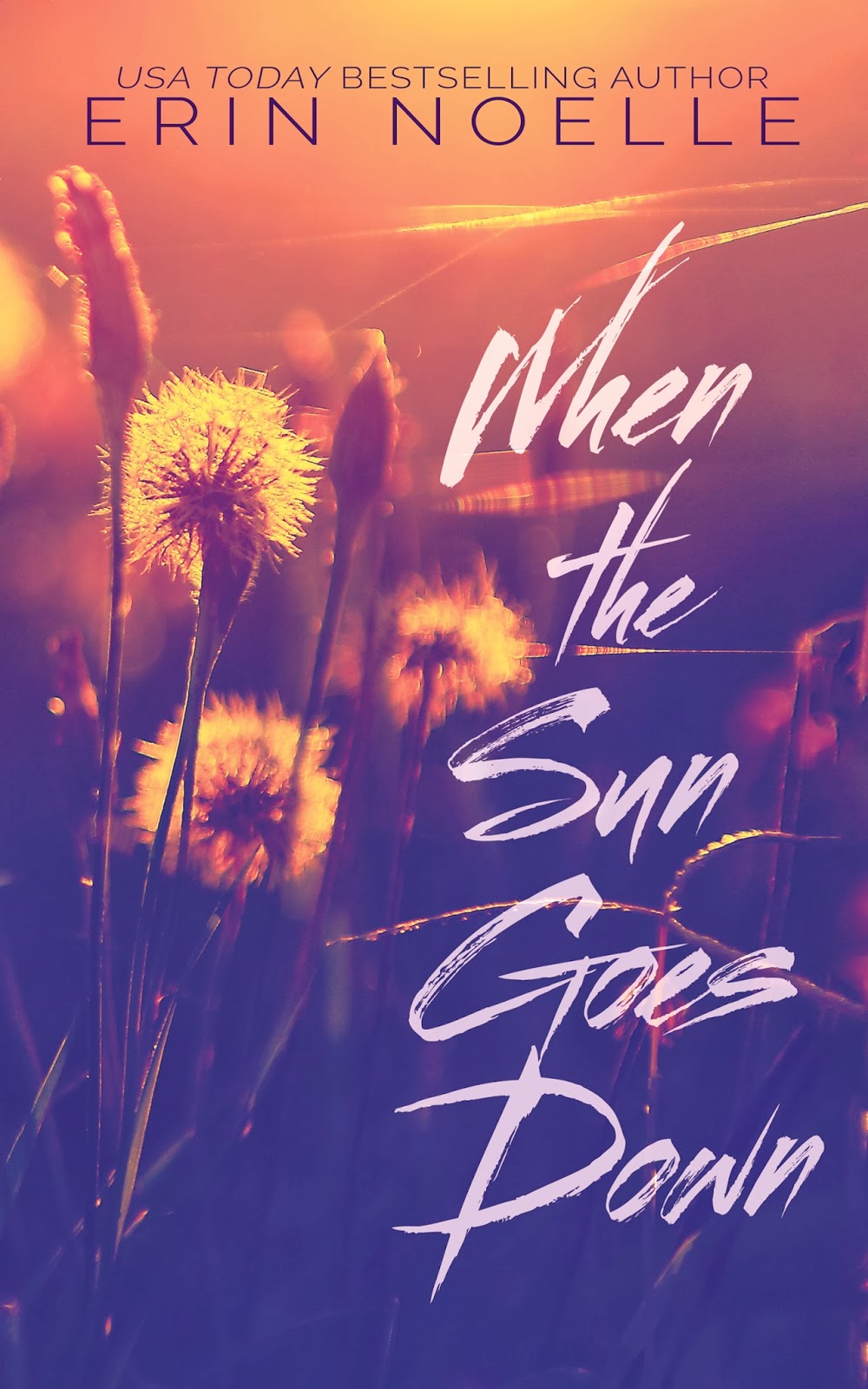 Trina is a quiet, reserved music teacher
at an inner-city elementary school. Because of the traumatic events of her
childhood, she’s skittish of people in general, but men especially frighten
her. However, when Lucca Ellis appears in her life, he refuses to take no for
an answer. Will he be able to help her overcome the past that has kept her a
prisoner for over eight years?

Kat is a woman scorned and out for
revenge. Wronged by the men in her life, she thrives on belittling and
dominating all men that she comes in contact with. Her end goal is to make the
one man, the one who stole her life away as a child, pay for his actions, and
she doesn’t care who she has to destroy to get there.

These two lives that both thrive on
control, were never supposed to overlap, but anything can happen… When the Sun Goes Down.

When the Sun Goes Down
~ Kat ~
Loud cheers from the pool match draw my attention back to that side of the room.
Apparently it’s over, because all I can see is money being exchanged all over the place. Moments later, two guys emerge from the mob, talking and laughing as they walk towards the bar. They actually look pretty similar; both have short brown hair, are well-built, and are dressed in fitted t-shirts and jeans with visible tattoos covering their arms. They both look me up and down as they step up to order their drinks and give me a smirk. They carry themselves as if they
are something pretty special, at least they think so. The fire inside of me is lit. The game is on.
An hour later, I send Leo a text that I’m ready to be picked up. The game ended up being child’s play; the boys unable to think with more than their cock. After they invited me over to their table to “teach” me how to shoot pool, I let them think I had no idea what I was doing, so that they could lean me over and press their bodies against mine while I held their “sticks.” It really took everything inside of me not to roll my eyes on numerous occasions, but the death stares that I was getting from all of the females in the bar made it worth playing along. A few minutes later, I exit the bar with not one, but both of the guys. I usher them into the backseat of the SUV and then crawl over one to sit in between them.

Leo gets behind the wheel and asks, “Where to this evening, Miss?”
“To the Hyatt at Union Square, and make it quick,” I snap at him. He simply nods and pulls away from the curb. The guys on either side of me - which I honestly can’t even remember their names at
the moment except that they both start with a J - are breathing heavily and I can see their erections bulging in their pants. Neither of them has said a word nor even attempted to touch me since we’ve walked out of The Edge; just with the appearance that I have money and authority, I’ve taken control of the situation. They sit silently, waiting for my instructions.

As we make our way to the hotel, I put one of my hands in each of their laps, unzipping their jeans and reaching inside to free their cocks. Both of them let out a series of moans and hisses as I grab their shafts and begin to slowly move my hands up and down. They refuse to look at each other’s cock even though they are less than eighteen inches from one another, which gives me a great idea for the night. The guy on the right, who I decide to call J1, finally gets
the nerve up to place his hand high up on my thigh just before we reach our destination.
I
release them as we pull up in the valet drive. “Make yourselves presentable until we get in the room,” I instruct. They quickly tuck themselves back in their pants and zip up. I grab my fun bag from under the seat as we exit the car. I lead them through the lobby without stopping at the front desk, straight into the elevator and to the suite that I keep a key to. What can I say? Money is powerful.
Ushering the guys into the room, I waste no time to get to business. “Strip and get on the bed,” I order them as I place the bag and my purse on the table and slip off my shoes.
One of the J’s decides he’s going to test my authority. “Why do you get to make all the rules?” Without turning around, I pull my sweater over my head and unzip my skirt, allowing it to pool at my feet. I bend over to slightly to step out of my skirt and give them a nice view of my exposed, bald pussy before standing back upright. My back still turned to them, I say calmly, “If you want a piece of this sweet
ass, you will strip, get on the bed, and not question me again. If you aren’t interested, you can leave now; my driver is waiting outside the door and can take you back to the bar. The choice is yours.” I hear the swishing of fabric followed by the slight creaking of the mattress. Game over… I win again.


When the Sun Goes Down Playlist 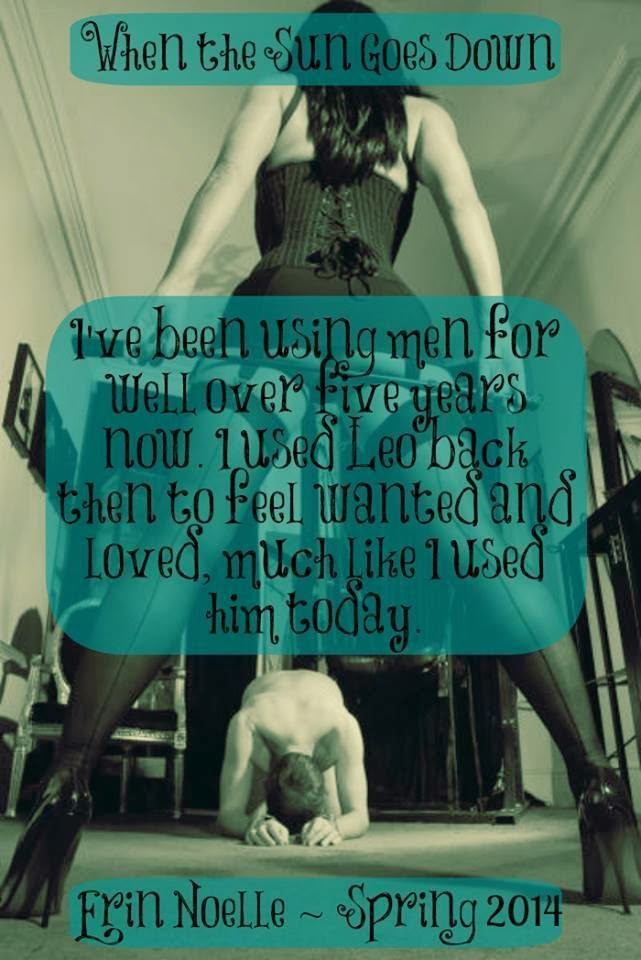 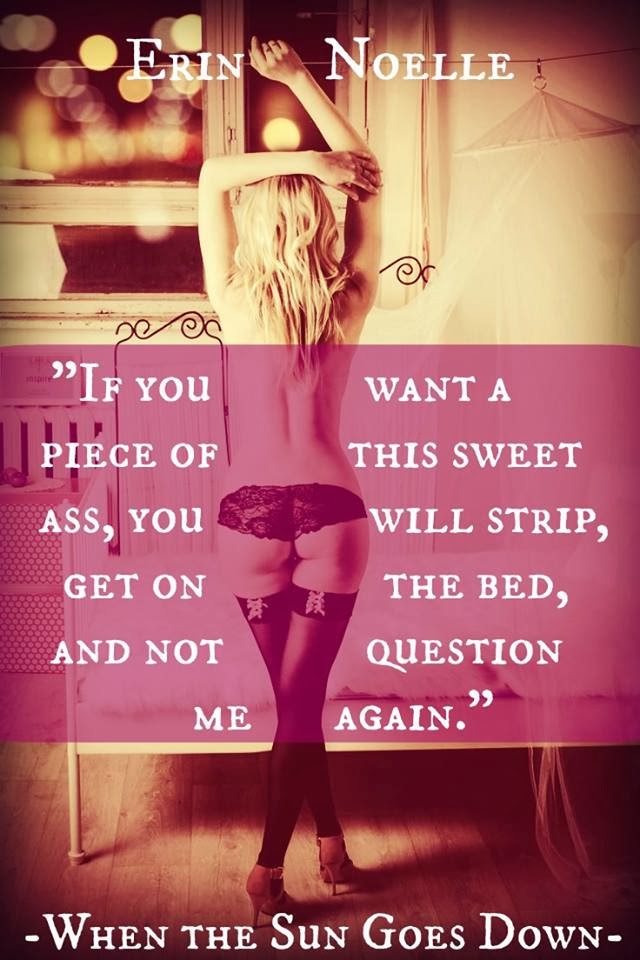 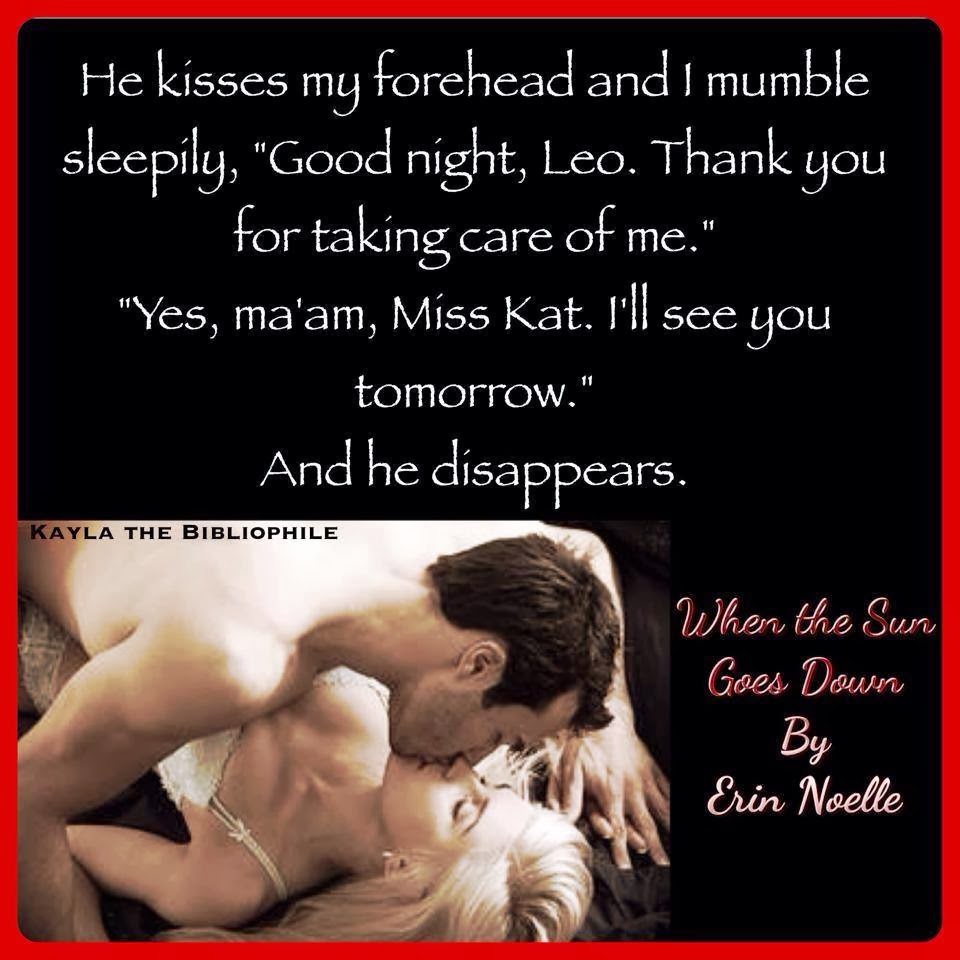 When the Sun Goes Down begins dramatically...a courtroom scene depicting a girl claiming the ‘accused’ murdered her mum, in front of her own eyes, as he’s proclaimed ‘not guilty’

Skipping forward 8 years and we meet Trina, a quiet, reclusive school teacher, she’s quite intriguing as just as we are starting to wonder if she was ‘the girl’ we meet…

Kat, Trina’s polar opposite, confident, affluent, and a total man-eater, well, that’s an understatement she takes men, and she punishes them, devours them and spites out their remains. So is she ‘the girl’?

I LOVE the dual POV in this book, the way Erin draws you in with Trina and her life, then POW you’re back with Kat – it’s like reading two books and you’re obviously wondering what the connection is, whilst getting the know the two girls.

Trina gets pulled into a social life by her one ‘friend’ Lauren, who won’t take ‘no’ for an answer and finally agrees to a night out, they are joined by the new teacher on the block, Lucca Ellis, who makes no attempt to hide his attraction to Trina.

“I want to be close to you Miss Ellis”

Kat continues to destroy men under the watchful eye of her caring chauffeur Leo.

“Even I have to admit as I walk into the room that the two guys are pretty nice specimens of the male species, physically speaking. To bad all I care about is fucking with their world.”

As it becomes clearer how Trina and Kat’s lives are entwined you begin to wonder if either can find happiness, and how much Lucca and Leo will get hurt in the fallout. I found myself looking for conspiracies in every chapter, Is Lucca who he seems? Is Leo, indeed – are Trina and Kat?

Moving away from her previous genre Erin has written a cracking book, very sexy, very intriguing and with a great twist, or two!! 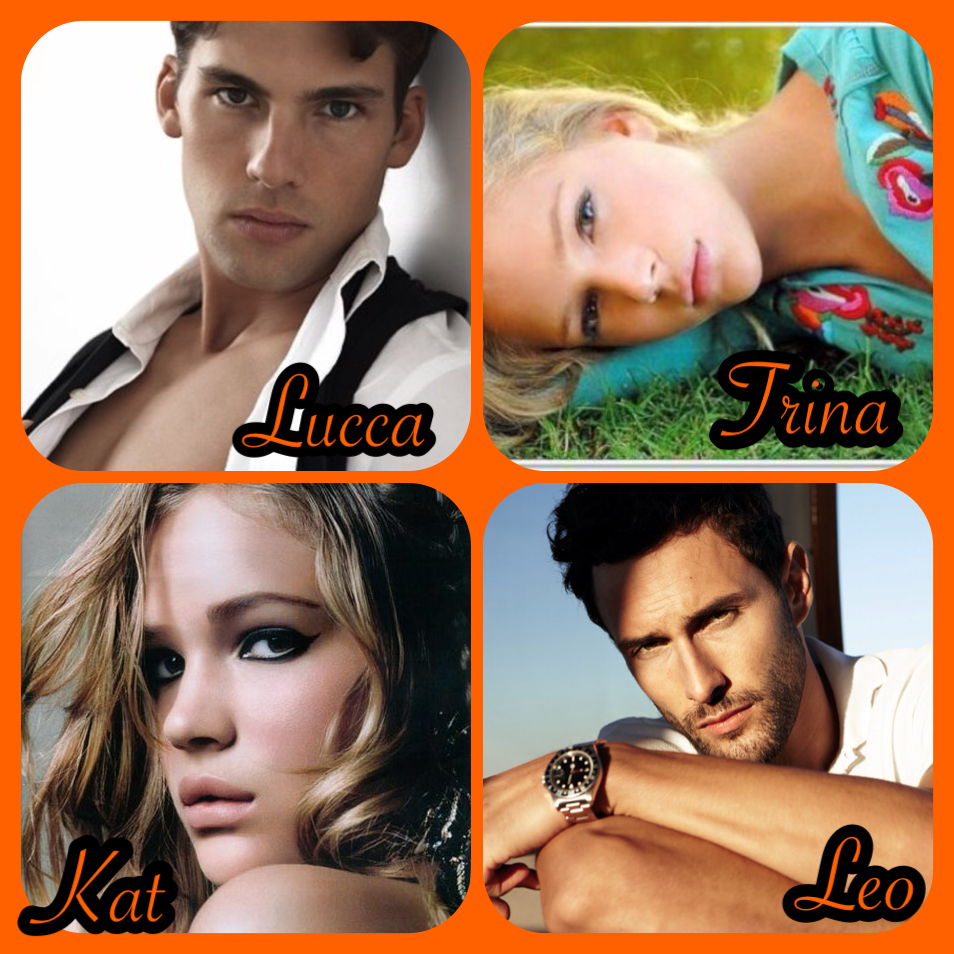 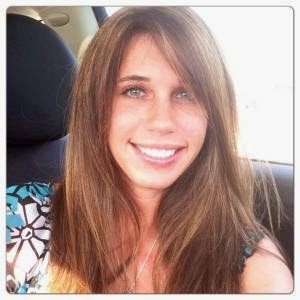 Erin Noelle is a Texas native, where she
lives with her husband and two young daughters. While earning her degree in
History, she rediscovered her love for reading that was first instilled by her
grandmother when she was a young child. A lover of happily-ever-afters, both
historical and current, Erin is an avid reader of all romance novels. In 2013,
she published the Book Boyfriend Series, which included books Metamorphosis,
Ambrosia, and Euphoria. Her books have been a part of the USA Today Bestselling
list and/ or the Amazon and Barnes & Noble overall Top 100.    You can follow her on Facebook @ www.facebook.com/erin.noelle.98,
her blog @ www.erinnoelleauthor.com, and on Twitter @authorenoelle. 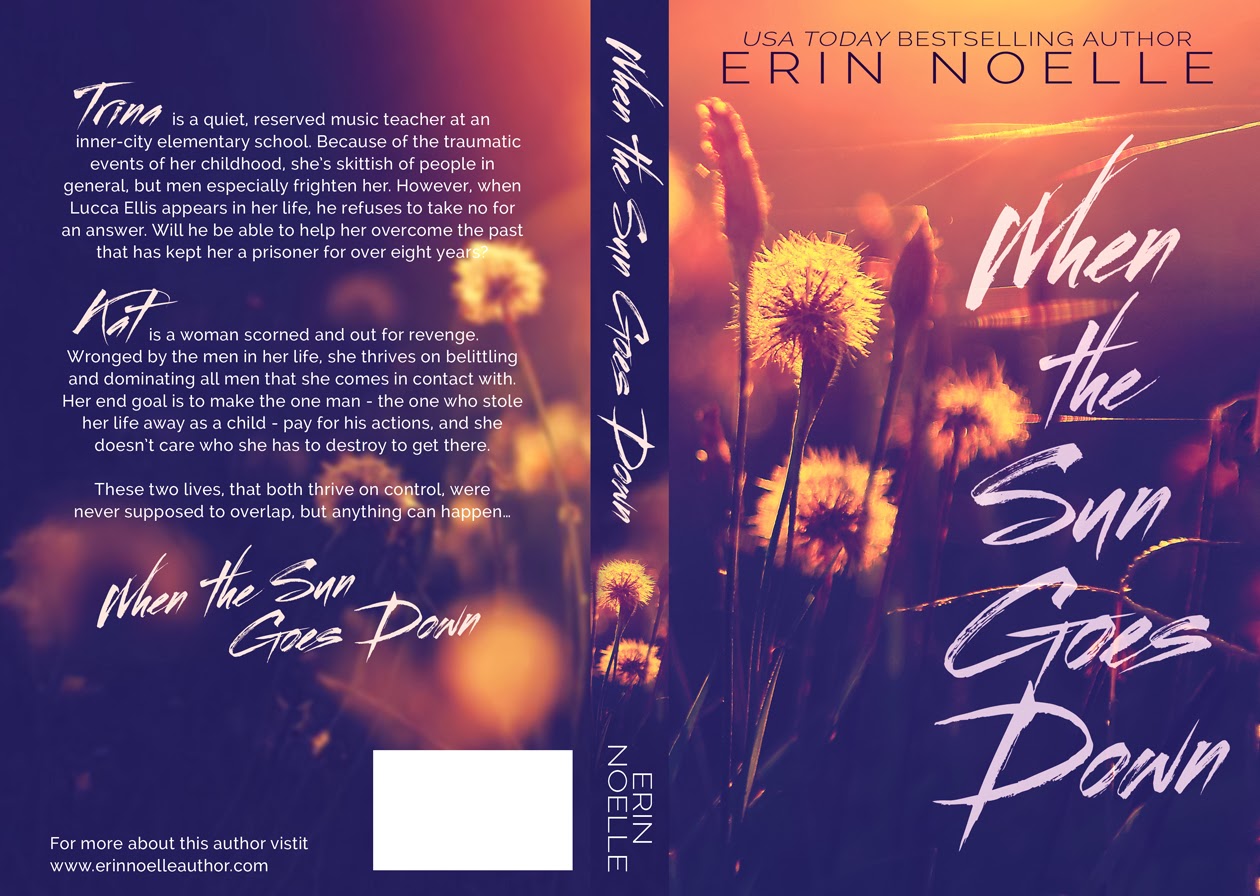 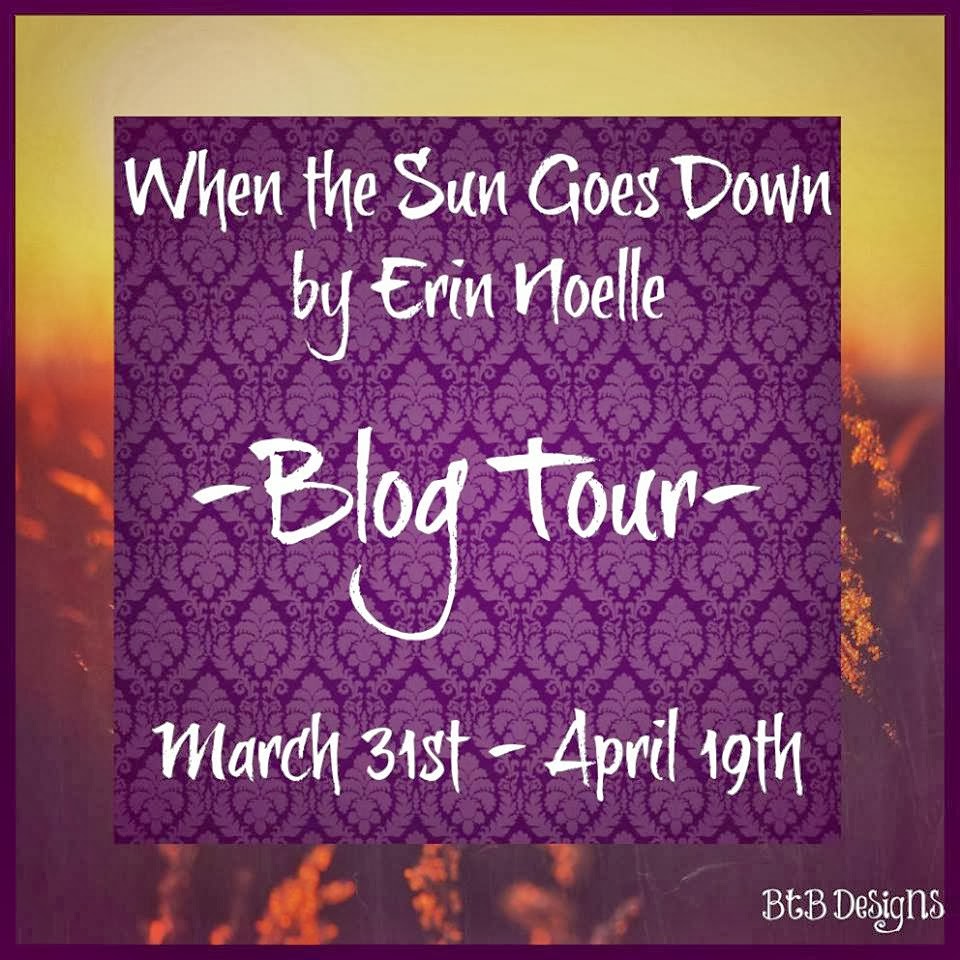