Pepper learned in high school that you have to protect yourself—a handsome devil taught her that the hard way. And she does that by pushing away suitors. Most of them are lame, completely lacking in the brains department. Dating isn’t something she wants or needs—or is it?

Jordan works hard, running his father’s legacy. A legacy that may be quickly crashing to the ground. With his brother, Jackson, together, they work to pump life back into their company. He doesn’t have time for dating, but then he meets Pepper. To Jordan, Pepper is an enigma—a fresh blast of cool air to his stressful life. She’s smart, sassy, and sexy as hell—the perfect distraction. Jordan will stop at nothing to claim her. But will Pepper allow herself to be claimed?

With Jordan putting cracks in her icy heart at each encounter, Pepper starts to question who she really is—The Ice Queen or the cliché Damsel in Distress? The adorable man is quickly melting her heart and her panties. One thing’s for certain—with Jordan, Pepper struggles to hold on to the only identity she feels safe with. Will he be the one to free her heart from the icy façade and make things right? Or, will things go terribly wrong? 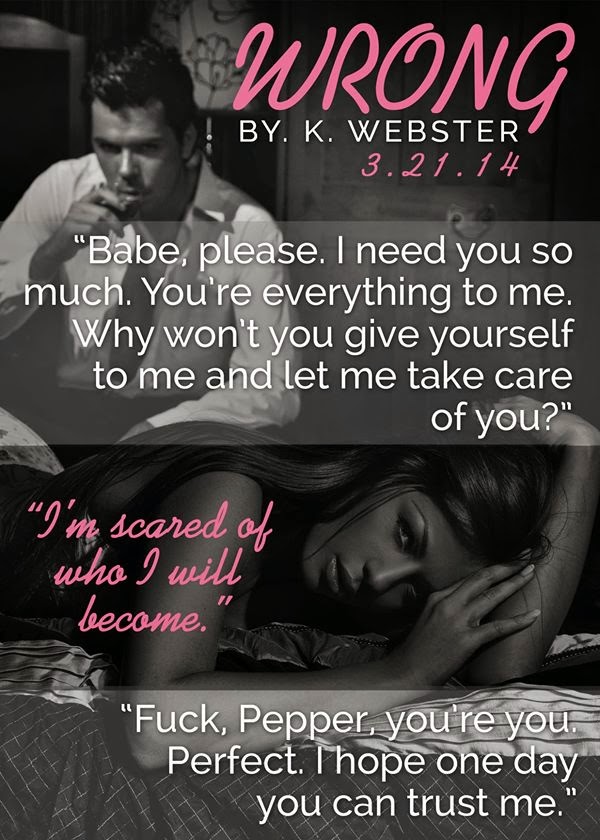 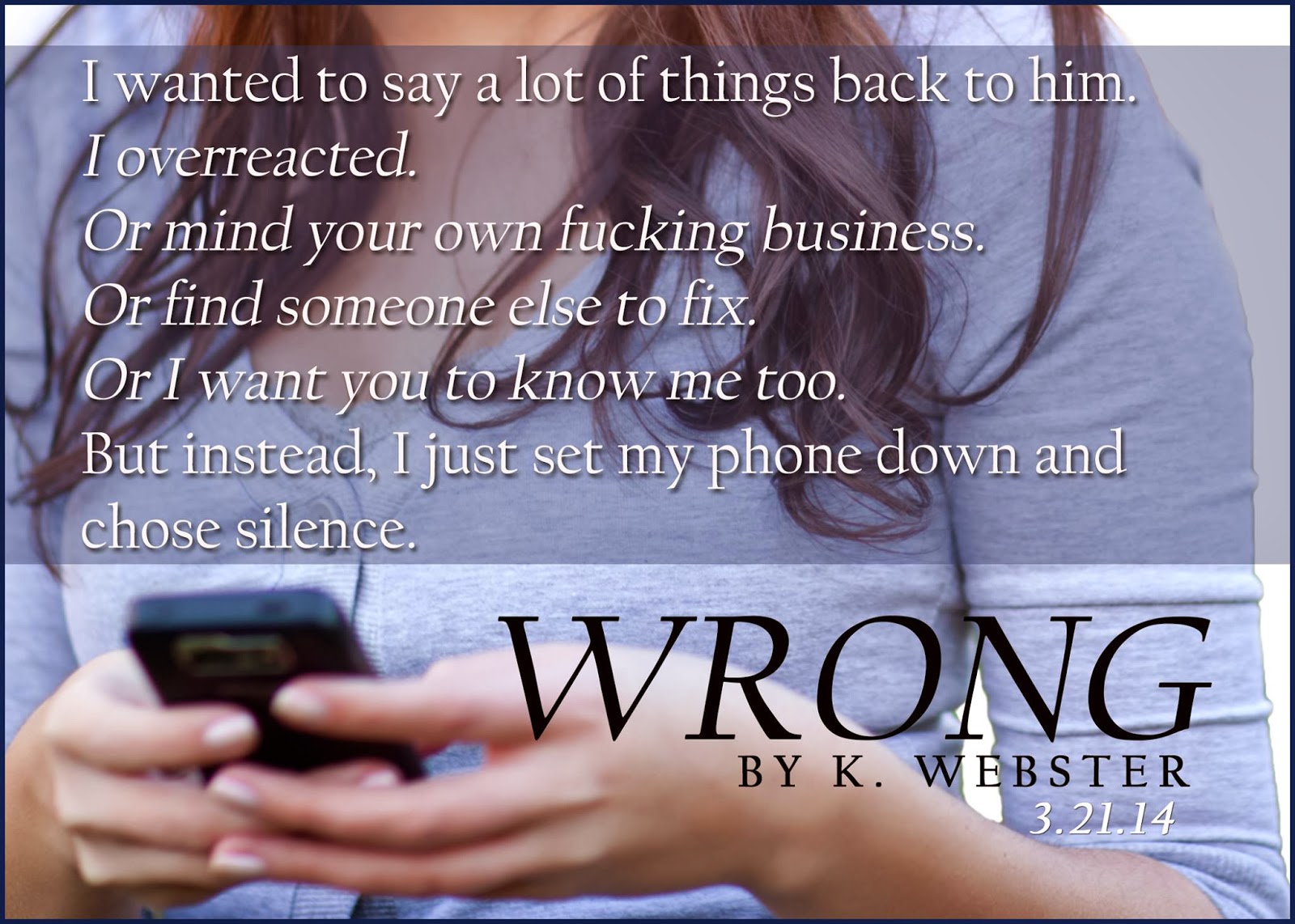 I’m a thirty-two-year-old self-proclaimed book nerd.  Married to for nearly eleven years, my husband and I enjoy spending time with our two lovely children.  Writing is a newly acquired fun hobby for me.  In the past, I’ve enjoyed the role as a reader.  However, recently, I learned that I absolutely love taking on the creative role as the writer.  Something about determining how the story will play out intrigues me to no end.  My husband claims that it’s because I like to control things—in a way, he’s right!

By day, I run around from appointment to appointment, wearing many hats including, mom, wife, part-time graphic designer, blogger, networker, social media stalker, student, business owner, and book boyfriend hunter.  (It’s actually a thing—complete with pink camo.  I lurk around the internet, “researching” pictures of hot guys who fit the profile of whatever book boyfriend I’m reading or writing about)

I guess you can blame my obsession with books on my lovely grandmother, who is quite possibly my favorite person on the planet.  At an early age, she took me to the half-priced bookstore each weekend and allowed me to choose a book.  Every single time, she caved when I begged for two.  Without her encouragement, I wouldn’t have been able to cope during some hard times without my beloved books.

Currently, I am finishing up my college degree that has taken me forever to complete.  It’s just on the list of my many “bucket-list” goals that I subject myself to.
Most days, you can find me firmly planted in front of my computer.  It’s my life.  If the world ever loses power, I’d be one of the first to die—of boredom!  But I guess as long as I have books and a light, I might just survive.

Looking forward, you can expect to see two more novels in the Breaking the Rules Series.  I’m nearly finished with the third.  Also, I have a standalone novel that will be released soon as well.
This writing experience has been a blast, and I’ve met some really fabulous people along the way.  I hope my readers enjoy reading my stories as much as I do writing them.  I look forward to connecting with you all!

This is Breaking The Rules #2 and it’s Pepper’s story! We met Pepper in Broken and we know she’s fierce and shy all rolled into one. She doesn't date, doesn't want a relationship, she hides her beauty behind drab clothes to ensure she doesn't attract attention.

Right at the beginning of Wrong we find out why Pepper is like she is, I wont go into details, lets just say she was hurt by a guy in high school and now in her 20’s still hasn’t got over it. Pepper is a Bitch – with a capital B – and proud of it!

If feeling awesome for what I’d just done made me a bitch, then I definitely loved being one.”

Jordan is just yummy, he’s a proper ‘good guy’ he wants Pepper and goes around it all the right ways, he wines and dines her, seduces her, looks after her and loves her, gradually breaking down her walls.

They do have one or two hiccups…trying not to reveal spoilers - Jordan’s first meeting with Peppers dad had me inhaling in horror whilst laughing out loud.
And the fact that Jordan is trying to save his and Jackson’s business from his dad’s illegal dealing and also that Pepper seems to be being stalked by someone desperate to ruin her life…Oh and I almost forgot her sleazy boss…

“There is a guy who has been threatening me. I actually received another one of his threats today before the gala. It wouldn’t hurt for the police to look into him.”

But when Pepper does finally allow Jordan in sparks fly!

God, it’s so hot when you pick me up. You’re such a man,” she purred.
I chuckled at her words. “I’m about to show you exactly how manly I am,” I said confidently, carrying her into the bedroom.”

There’s a lot standing in the way of a fragile couple like Pepper and Jordan, I’m not sure they can make it…you’ll have to read to find out!!

Watch out for #3 in this series Scarred…I’m pretty sure we might be getting Olive’s story.

Andi has the perfect life. She is about to graduate with an Architecture degree and marry her-All American baseball star-fiancé. When she catches him in bed with another woman, her world is turned upside down. Left to pick up the pieces of her shattered life, she takes on a new persona—a promiscuous one. This new role protects her heart from ever being broken again.

Andi now lives by a set of rules. The game? Sex with a new pawn every weekend. Every Friday, she sets her sight on a new sexy, successful man to play along—no strings attached, please. When Monday rolls around, she kicks them to the curb and moves on. It has helped her get through the pain of her past—that is, until she meets Jackson.

The mysterious Jackson is excited to play her game. He too has had his heart broken in the past and isn’t looking for a repeat. Eventually, hearts get involved and Andi wonders if the game is still worth playing.

Will she look for a new pawn or will she break the rules with Jackson?