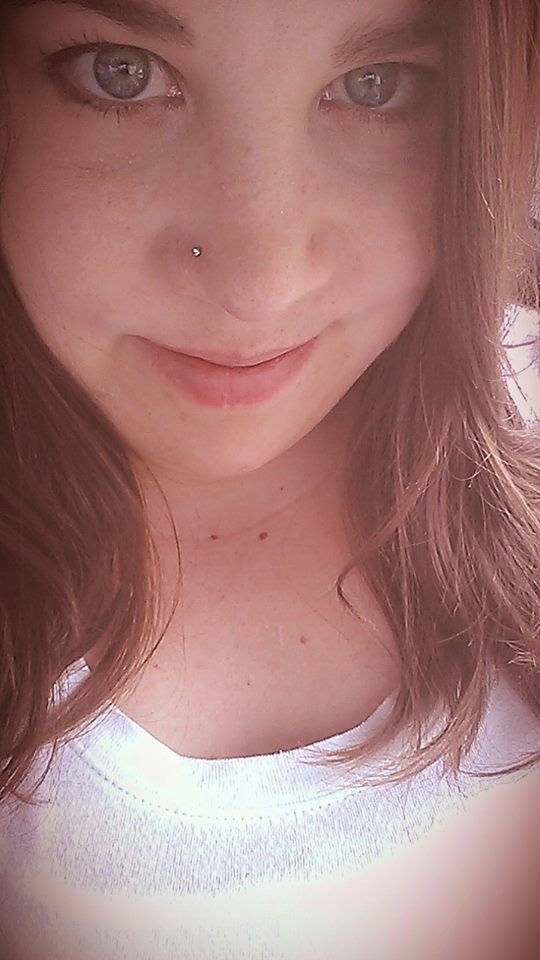 Tina Dawid is 26 and lives in Saint Louis, Missouri. This book was her therapeutic outlet for


the suicide of her only sibling Austin Dawid in 2011. Tina goes by the penn A. Dawid to pay tribute to her brother Austin. Tina loves to read, spend time with her parents and friends, and her dog Petey who truly saved her life.

1. Tell us about your book/books? Regrets is a fictionalization of my journey of moving on from an abusive relationship and the suicide of my only sibling Austin in 2011. Regrets dark beginning turns into a beautiful love story.

2. How did you get started as a writer? I began reviewing books for blogs and then creating my own blog and design company and then I decided it was time to start writing myself. It was very therapeutic to write Regrets. This book means a lot to me and I have always loved to read, so why not start writing myself!

3. What’s a typical day like for you? I usually work during the day, sometimes the evenings and then I come home and spend time with my boyfriend.  I liketo spend my free time reading, watching movies, and just relaxing. I do write on my off days or when inspiration hits me. I am currently working on my second book called, “Her Professor.”

4. Describe your workspace.  I have a wood desk with a book shelf attached. I usually do blog things on my desktop, but when I’m writing I use my laptop so if I feel like writing in bed that’s where I am or if I want to go outside and lay on my hammock under the maple tree that’s now huge that my
brother planted from a seed.

5. Favorite books? I have two series that I love. First is Kerrelyn Sparks series called, “Love At Stakes,” and Sylvia Day’s “Crossfire Series.”

6. Tell us 3 interesting things about you. I’m really boring. I’m a home body. I love to be home in sweat pants just watching tv, I’m extremely obsessed with my 90lb pitbull mix Petey, and if you read Regrets you’ll know why, and I believe in spirits. I know that my brother is around and he watches over me. I can feel it.

7. Favorite quote: “Keep moving forward because backwards is not an option,” – Unknown

8. Best and worst part of being a writer? I love being able to express myself through words quietly, but it is also give and take, sometimes nothing is there to express. 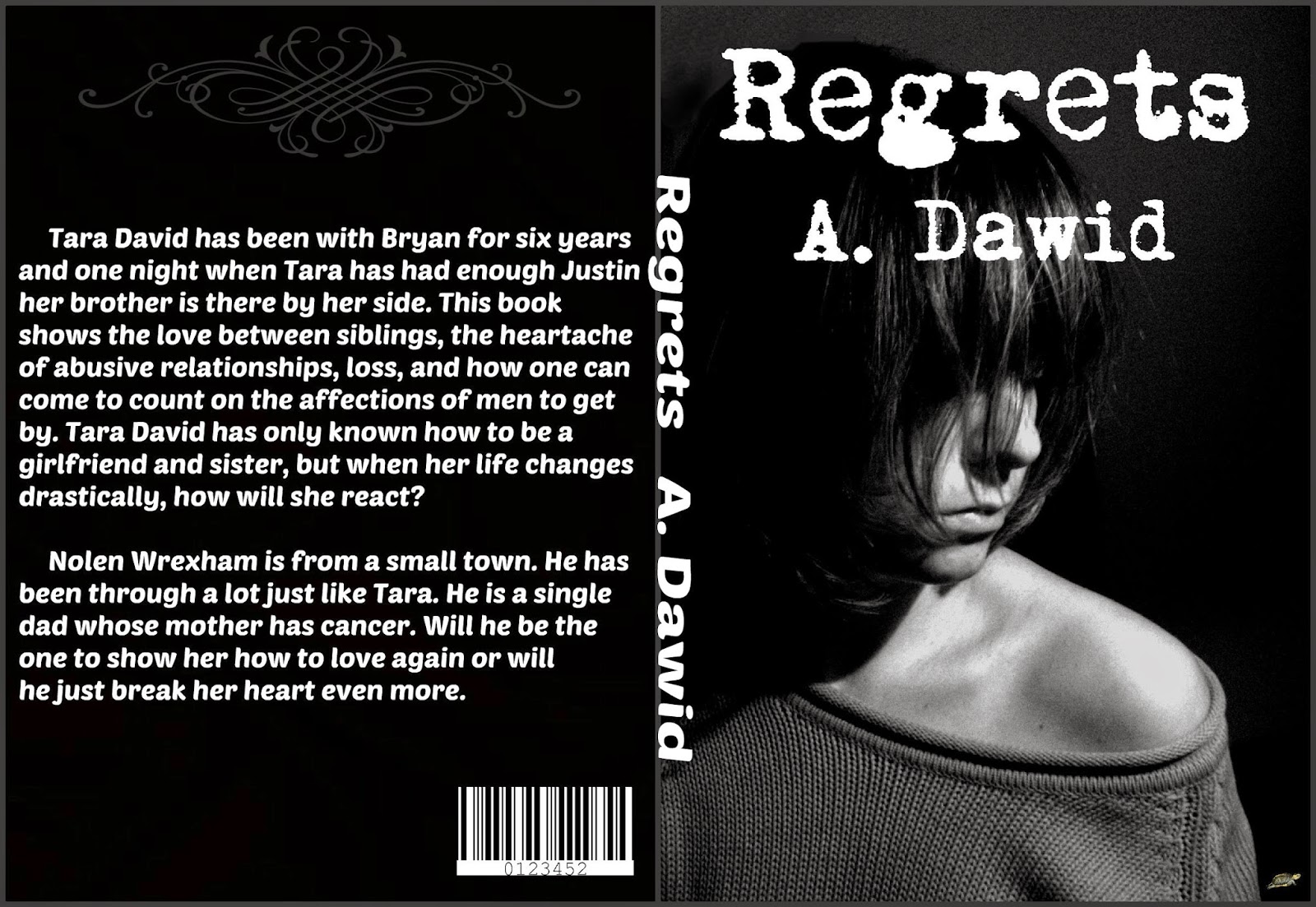 Tara David has been with Bryan for six years, and one night
when Tara has had enough Justin her brother is there by her side. This book
shows the love between siblings, the heartache of abusive relationships, loss,
and how one can come to count on the affections of men to get by. Tara David
has only known how to be a girlfriend and sister, but when her life changes
drastically, how will she react?

Nolen Wrexham is from a small town. He has been through a
lot just like Tara. He is a single dad whose mother has cancer. Will he be the
one to show her how to love again or will he just break her heart even more? 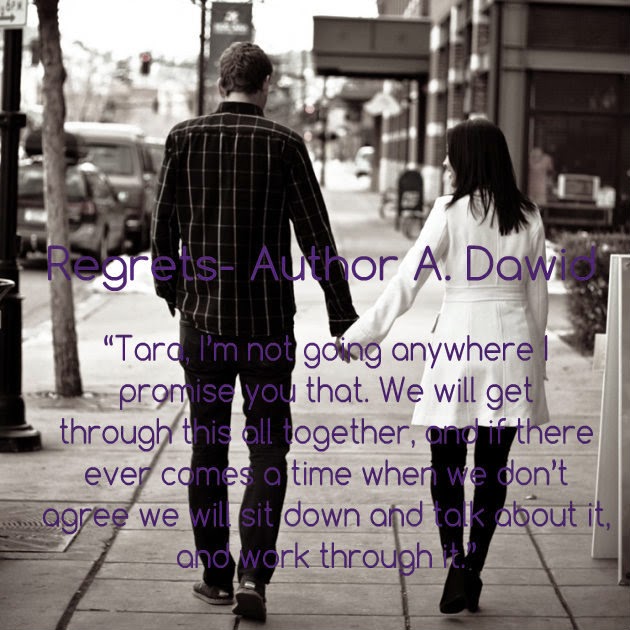 “Come over here
with me, to the couch he said.” I did as he said, walking over to the big
fluffy brown couch. I sat down as did he, and I looked at him and said, “I love
how abrupt you are.” He smiled that one in a million smile at me and said,
“only with you. Do you know why?” I couldn't think of an answer, so I just
shook my head no. He moved a little closer to me and whispered, “Because I know
you want to be dominated in that way. You like it rough.” He was right. In all
the years and partners I had had I loved to be the submissive one. I wanted to
be controlled when it came to sex, but not when it came to my life. I looked
back at him and said, “So control me.” Within a second he was kissing me, but
it only lasted for a short second before he pulled away. “Get up and stand in front
of me.” I did as I was told, nervous and excited at the same time. “Now, I want
you to take an article of clothing off, one at a time.” I looked into his blue
eyes as I started to remove my t-shirt. He watched me intensely. “Now the shoes
and jeans.” When I started to unbutton my jeans he did the same, mimicking my
movements. I was so horny right at the moment I wanted to jump him right then
and there, but I also wanted to make him watch me and work for it. I slid my
jeans down my legs after slipping off my converse. Right as I was about to take
my bra off Nolen told me to stop, “let me look at you in those sexy panties and
matching bra. Come here.”  I walked
slowly towards him, and without hesitating he stood up, removed his shirt,
wiggled his jeans down his own legs, stepping out of them, and in one swift
movement picked me up off the ground and into his arms. I laughed as I said,
“where are you taking me?” He returned the laugh and said, “I’m taking you to
my bedroom, where I am going to fuck you so hard you’re going to want me to
never stop.”
When we
entered his bedroom, he tossed me down on the bed, and I couldn't help but
giggle. He knew exactly what he was doing to me. “I want you,” I said in almost
a whimper. Nolen pushed me down on the bed and lowered himself onto me, holding
himself up not to put his full weight on me. He reached at the hem of my
panties and pulled them down, and said, “So beautiful.” I wanted to die right
then when he was just staring down at my pussy. He took one finger and traced
along the opening, teasing me, not putting much pressure on it at all. I could
feel his cock growing hard under his boxers. I reached my hand down to feel it,
and he grabbed my hand and flipped me over, pulling my legs toward him so my
ass was in the air. I heard him discard his boxers, and I could feel his cock
on my ass. He was rubbing it along the crack of my ass. “Please Nolen, fuck
me!” I was practically begging for it, but he continued to take his time. I
pushed my ass back against him, trying to get some sort of pressure there, but
he held onto my hips to steady me. He reached down between my legs, running his
fingers along my slit right over my clit moving fasters and faster in circles.
I could feel the wetness between my legs, and my orgasm building. “You are so
wet for me, baby,” Nolen said almost in a teasing tone. He knew he was
torturing me and he loved every minute of it. Abruptly I felt his tongue on my
asshole moving up and down, while he was still fingering my clit harder than before.
“Nolen, I can’t take it anymore, I’m going to….”

This is a story I was hooked on from the start. The writing, the emotions, the characters; all of them, just called to a part of me and I couldn’t put it down. A story of abuse, love, loss, heartbreak and ‘Regrets’; A.Dawid does not hold back and throws you right in to the thick of it. She keeps you reading until the last word and even then leaves you with wanting more.

After a devastating tragedy in her life, Tara David is left flitting through day to day feeling completely lost and alone. Always ending up falling for the wrong guy, Tara vows not to fall in love again; to keep herself guarded so as to not find herself getting hurt...again.  That is until one walk and one chance meeting in a park.

Nolen Wrexham has his own ‘Regrets’ in life, but one thing he doesn’t regret is plucking up the courage to talk to Tara at the park. From that moment on he is determined to break down her walls, bring brightness to her eyes and be the man he knows she deserves.  He’s kind, sensitive and loving but is also the strong and dominant male when he needs to be.
Tara and Nolen’s relationship blossoms throughout the book, and they find themselves quickly falling for one another.

“Tara, I really do think I’m falling in love with you. From the moment at the dog park, I knew I had to know you. Let me know you.”

But Tara still has some scepticism. She vowed not to open her heart again, but Nolen is evoking a lot of feelings within her which quite frankly, is scaring the shit out of her.

“I’m scared Nolen. I don’t want to get used to having you here, and then have you leave, and I don’t know what I’d do without you.”
“Tara, I’m not going anywhere I promise you that. We will get through this all together, and if there ever comes a time when we don’t agree, we will sit down and talk about it, and work through it.”

Will Tara lose her inhibitions, take a chance with Nolen and open her heart to love again?

“Keep moving forward, because backward is not an option.”

I felt as I got further and further in to the story, A.Dawid’s writing got better and better and could tell it was written from the heart. The emotions just leap from the page and get lodged in your heart. I fell in love with Nolen and Tara and hoped they would finally let go of the ‘Regrets’ of their past and find the happiness they deserve together.

A beautiful, personal and heartfelt debut from an author I’m very much looking forward to reading again.

Bravo, Ms Dawid, bravo. And thank you for sharing such a personal story with us. It really was beautiful and so emotional. 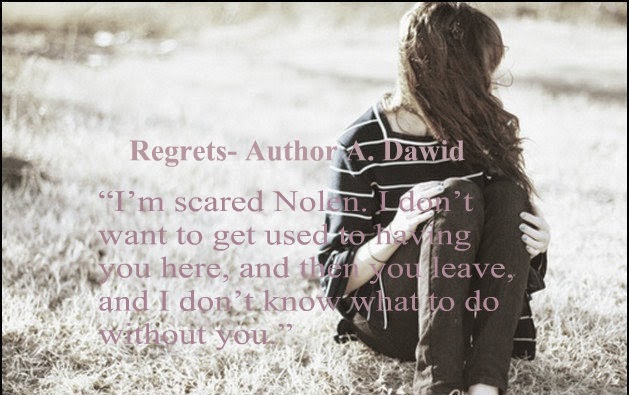