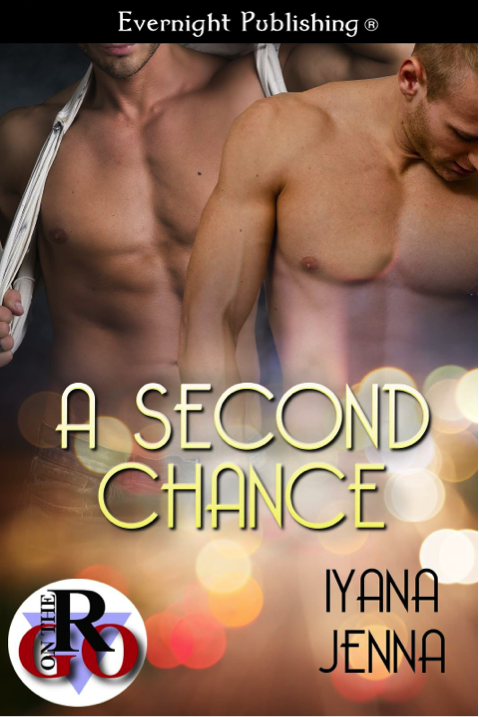 Good morning. I am arse deep in publisher edits for Breach of Contract and putting the final touches on Illicit Activity, the free Christmas story. But I am taking a break from writing to bring you an interview with Iyana Jenna’s and her character Chance Devereux.

A little bit about A Second Chance
Chance Devereux and Ryder Adkins have worked on the same TV series for three years and share a house near the set. Yet Chance can only watch from afar when Ryder gets engaged. Even though Chance is still deep in the closet, he can't help be jealous.
Since the first day of shooting, Ryder has had his sights on his costar, but Chance has a girlfriend and Ryder thinks Chance is straight. After years without a concrete result, Ryder decides to forget his desire to be with Chance and go back to Mike.
During a hiatus, Chance does an interview with journalist, Sebastian Vanderbilt. Sebastian opens Chance's eyes, and he decides he needs to make Ryder his. Can they work it out, or  are they all out of retakes?

Please tell us a little bit about yourself:  I live in LA. I’m an actor and I have a TV series, a successful one, with my co-actor, Ryder Adkins. It was the last day of shooting the last episode of a season, but something happened before that. Something I’d rather not talk now that involved Ryder and another man…

Are you a neat person or a messy person?
I’m a very neat person. Ryder is the messy one. *curses* Damn. I promised myself not to talk about him.

What happens when you lose your temper?
I think I’m gonna cry…

Are you happy with the way people perceive you?
No, not really.

Is expressing love difficult for you? Why?
Yes. I don’t know. Maybe because I love someone I’m not supposed to?

If you were taken out of the story and placed into your author’s world, what would be the first thing you’d do?
Marry Adkins. Why wait?

What’s your take on Sebastian?
I love Sebastian—not that way. But I know he loves me that way. He’s a good guy. He’s very protective of me. I felt safe when I was with him.

Excerpt from A Second Chance
Without waiting for Mike’s answer, he slid his phone open and scrolled down to Chance’s number. Ryder glanced briefly at Mike, who simply nodded and turned away to give him a semblance of privacy. Ryder turned his attention back to the call he was making and nearly jerked in anticipation when it was answered.
“Hey. Chance, it’s—”
“I’m sorry, but Chance can’t answer the phone right now.”
Ryder’s eyes bulged. Taken aback, he swallowed. “W-what? Who is this?”
“May I ask who’s speaking, please?”
“It’s, uh, Ryder. I’m his, his best friend—”
“Oh, Ryder. Sure.”
Ryder lifted an eyebrow when the man laughed a little.
“Chance talks a lot about you,” the man went on.
“Thanks, but….” Ryder’s eyes flickered to Mike, who was observing him closely. His mind began to wander to places he didn’t want to go. How could he not? The man had Chance’s cell. “Where is he? Do you mind if I talk to him?”
“No, of course not.” The man sighed. “But he really can’t.”
“What? What happened? What have you done to him?”
“Whoa, wait a second. I’ve done nothing to him. But he’s asleep right now. He hasn’t been able to sleep for some time. He’s been in so much pain he couldn’t even rest.”
Ryder slumped in his seat, rubbing his face. “Oh, God.” Mike had been right. Feeling lightheaded, Ryder whispered into the mouthpiece. “What’s wrong with him? God, is he okay now?”
“Yeah, I truly hope so. He’s much calmer now. He caught a stomach bug a couple of days ago.”
“And you’re—you’re Sebastian, right? Sebastian Vanderbilt? I saw the pictures.”
“That’s me. Oh, and Ryder?”
“Yes?”
“I heard about your engagement. Congratulations, man.”
“Well, I don’t—”
“Hey, look,” Sebastian cut him off. “I’d love to talk to you, but I really have to go. I’ll tell Chance that you called, okay?”
“Wait, Sebastian. I’m just… you know, I—” But it was too late. Sebastian had hung up. Sucking in a breath, Ryder could only gawk in disbelief.
****
Sebastian didn’t know for sure why he felt reluctant to talk to Ryder. He had no reason to feel threatened by him, though if the way Chance talked about Ryder in the interview was anything to go by, Sebastian might have to consider how he felt toward the guy. This was such a new thing for him, feeling insecure. He wasn’t that kind of guy. Sebastian wondered what Chance had done to him.
Back in the guestroom where Chance was resting, Sebastian found him awake. Chance’s gaze wandered, his expression half-studying his surroundings, half-wondering how or why he was there in the first place. He turned to Sebastian only when he heard him clear his throat. Warmth surged in Sebastian’s heart at the fleeting blush on Chance’s freckled face. He wondered what Chance thought about the room. Sebastian loved his place, but perhaps it was childish to want to hear what Chance had to say about it.
Sebastian went to sit next to Chance, reaching out to feel his brow.
Chance groaned, shying away. “I’m not a child, Sebastian.”
“No.” Sebastian smiled. “But you gave me quite a scare.”
“Sorry.” Chance looked down.
“Hey, that’s not your fault. You were sick and obviously you hadn’t fully recovered when you left the hospital. How are you feeling now?”
“Much better.” Chance licked his lips.
“Water?”
“Please.”
Sebastian watched Chance drink slowly, and when he pulled back, some drips still clung to his lower lip. Sebastian knew he’d been staring, and he completely ignored the glass shoved back into his palm. Finally, he chuckled, put the glass away on the nightstand, and took off his shirt.
Chance’s eyes widened before they darkened a bit.
“May I?” Sebastian gestured toward a space on Chance’s huge, fluffy pillow.
Chance shifted a little to give him more room, much to his delight. He slipped under the cover and could feel Chance stiffen slightly. His face—mere inches from Sebastian’s—was taut before he relaxed and snuggled into Sebastian’s bare chest. Chance’s body felt sleep warm under his thin T-shirt, and Sebastian braved Chance’s reaction and slid a hand under it. He palmed Chance’s flat abs and up to his muscled torso, sighing appreciatively at the deep moan wrenched out of Chance’s throat.
“Beautiful,” Sebastian said huskily. “Very beautiful.” He tweaked a nipple and was rewarded with the stretched column of Chance’s smooth neck as he threw his head back, lips parting, his guttural growl sending Sebastian’s blood to his groin.

A little bit about Iyana Jenna

Iyana lives in Jakarta, a city famous for its traffic jams, a lot of cars and motorcycles, and people selling stuff on the roads. You can spend two hours on the road going to a place you can reach in half an hour in a normal situation. Thanks to the traffic jams, though, Iyana can come up with a lot of stories, mostly shorties, as she prefers to spend the time during her trips writing into her cell phone rather than sleeping.

Another thing Iyana loves is kitties. Right now she has three of them. Their names are Cil, Horus, and Betsy, and one kitten. When she doesn’t write, she plays with them, or they would play with her when she writes.