**Blog Tour** Wait For Me by TS McKinney & BJ Grinder

Book: Wait for Me 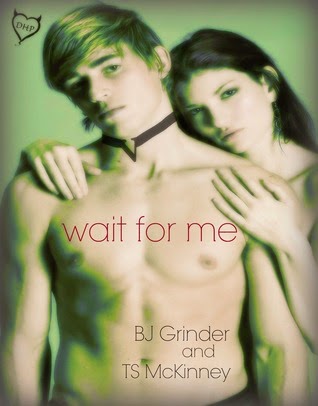 Will Susannah rescue Jasper before too much damage is done to his body...and soul? Will she get the chance to prove her love?

BJ Grinder was born and raised in a small Tennessee town.  She is the single mother of four children, three dogs and three frogs.  She enjoys hiking, reading, and, of course, writing. With a life this busy, sometimes a girl needs to escape into the fantasy land offered by books.

TS McKinney lives in East Tennessee with her high school sweetheart/husband and all the countless dogs she picks up from deserted country roads.  Her professional career has been in business but her heart has always belonged to the fantasy world found in books.  Creating wicked worlds where one can meet the perfect hero - and then do anything to him that you want - has been a hobby that has brought her plenty of hours of fun and naughty entertainment.  When not working, reading, or writing, she loves to spend time with her family and forcing them (because they don't really have a choice) to allow her redecorate their houses...and listen to her naughty...sometimes sadistic stories.

I am rather mixed on this book, I loved the plot, the characters were intense and easy to connect to, but it was long and it felt like three books in a series all put between two covers, giving you two cliffhangers in one book.   That isn’t a bad thing, it certainly didn’t take away from the story and the interest I had, just a style that I am not familiar with so that was something I needed to adjust to.

Step one in the book we meet Susannah, Tyler and Jasper.  Susannah is in her mid-twenties and has become a FBI agent because her father lost his life as an agent.  She is fresh out of training, paired up with the sexy Tyler who wants more from her than a partner; he wants her to help in a human trafficking ring, led by Victor.  Jasper is Susannah’s 18 year old neighbor who has a crush on her, unfortunately she has feelings for him but the age difference stops her from going forward with it.  She is not even sure she wants to be an agent in the FBI, burn out had come early for her with all the evil she sees, but when Jasper is taken by the traffickers due to her inviting him to help track them down, she comes face to face with the horror they will put on someone she cares about to keep their freedom and Susannah’s silence.  Not only was Jasper taken, but Ty was brought in because a “mistake” in information.  With the guilt of Jasper being a sex slave now, Ty being almost killed and the FBI taking actions that was not what she thought, she ends up living with her brother and his lover, which leads us to step two in this book.

For almost a year she lives in the depression and guilt of what happened to her, Jasper and Tyler.  Her brother and his lover, who is very rich and influential, try everything they know to help her get over this.  Nothing will help till she knows if Jasper is alive and free.  Her brother’s lover is a Dom and he sees Susannah as a Dom too so they use the club and submissive to get her to take control of her live again.  Those are nice breaks from reality but nothing less than Jasper in her arms will be enough.  When a rescue attempt is organized she goes on the mission and what she sees shatters her even more.  I will admit, one scene in this part shattered me but we soon find that Jasper can be saved physically from Victor and his right hand Nicholas, but mentally they might be too late.
Step three in this story and probably the most gut wrenching for me as a reader.  Once Jasper is brought back to her brother’s home, the long road to recovery begins.  It will take a village to get Jasper back to any sort of normal and Ty wants to be part of Susannah’s life as well.  She will have to face her guilt head on and embrace that she only has a limited role in fixing either man but full power to fix her.

So much happens in this book that I can’t share for risk of spoiling the story for you.  I highly recommend this book if you love intensity, action and some dark and evil deeds.  The hotness ranks high with this one as well but I was more impressed with the plot.  My only complaint was I just wished it read more as one whole story with consistency throughout instead of a three part novel placed in one book.  Not a huge complaint at all considering the epic ride the author is about to take you on.