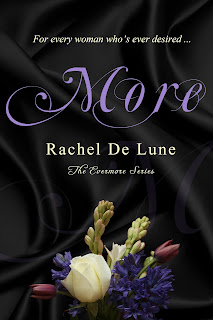 Miserable and dejected in her marriage, Isabel Fields encounters a stranger in a bar promising an opportunity to change her life. Nonetheless, she must make a decision she thought was reserved for other women.

Sexual dominant, Sebastian York, specializes in igniting passion in his lovers, but women always come and go, and he’s never had a woman to call his own.

Leading Izzy, a natural submissive, on a journey of sexual awakening, their casual arrangement soon grows too confining. Seb satisfies everything Izzy has craved and she instinctively bows to his dominant personality, fulfilling his every desire.

Their casual arrangement ignites Isabel’s long-buried passion and touches her heart, but Izzy struggles with the emotional turmoil that plagues her soul.

Sacrifices will have to be made by both, putting their love to the test. Izzy stands to lose the marriage she dedicated years of her life to, but has a chance to gain a relationship she's always longed for. All depends on whether Sebastian proves to be the love of Izzy’s life, or leaves her wanting more… 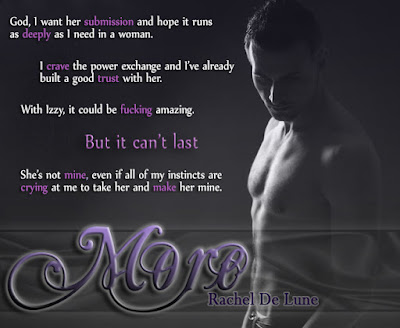 (Recommended for readers 18 and up due to explicit sexual content)

I do as I’m instructed, and in this position, my knees are forced open, wider than I would really like, and my skirt has ridden up to my waist. He’s looking right at me… down there… and I sit with my legs splayed for him, doing what he asks of me.

“You have such a cute pussy. You are going to make yourself come in front of me. Now. I want you to follow my exact instructions. If he won’t look after your needs, I’ll teach you how to do it yourself.”

Cute? I can’t keep up with him. His unpredictable demands are keeping me off balance and tense. Before I can process anything more, Seb begins his instructions.

“Stroke your upper thighs slowly with the palm of your hand and the flat of your fingers, but don’t touch your labia.” I do as he commands. “Good girl. Slowly now, keep stroking those thighs.”

Am I really doing this? Okay, so I’m enjoying this… a little bit, anyway. God, what if it were his hands?

“Now take the middle finger of your right hand and suck it into your mouth. Make it nice and wet and then slide it gently between the lips of your labia. Now, very slowly, rub your clit. Slow down. There’s no rush. This can take the next four hours if it has to.”

Four hours? No way. There is no way that I’m going to last much more than four minutes, let alone hours. I’ve not been this wet, this turned on in—

“Now stop rubbing and place your finger right on top of your clit. Good, now press down on it hard… and release. And again. Press hard then release. Good.”

Oh, I didn’t know that felt this good… Umm. I’m trying to do what I’m told, but I want to do more, move faster. My nerves are awakening.

“Now move your finger in tiny little circles around that tight bud. Slowly… Good. You can go back to rubbing again, but I want you to do it at half the speed you were.”

I can’t quite believe that I’m enjoying this, sitting here on a chair in the middle of his dining room, fully clothed except for my knickers. My legs are wantonly spread apart and he’s perfectly relaxed opposite me as I touch myself, per his instruction. It’s crazy.

“Isabel, are you wet?” he asks, as if it’s the most natural thing to say. My body relaxes into the vulnerability of the situation and of being exposed to him in a new, more intimate way. I push any and all my insecurities aside and answer him.

“Take your index finger and slide it down the side of your inner lips. Do not touch your clit. Now do the same on the other side with your ring finger. Now both fingers together, one each side. Good girl. Close your eyes and let your head fall back. Now, with those two fingers, start rubbing right in line with your clit and then stretch your lips wide apart.” His words make me needy, yet I flush with embarrassment. “Wider than that, Isabel. Stretch them so your clit is tight.” He purrs his instructions, a deep and soothing voice that automatically has me trusting yet hot as hell.

Don’t think, Izzy. Just do it. Don’t worry about him. Follow the sound of his voice and hope he keeps talking to you. God, my clit is burning and I can feel my pussy opening, wanting this.

“Now, with your free middle finger, gently tap your clit.”

“Yes, tap it, Isabel. Now do it harder. Slap it. Tell your clit off for being impatient.”

A bolt of pleasure runs straight from my clit through my body as my finger makes contact. The sensation isn’t pure pleasure, though. It is tinged with pain, just on the fringe, driving my desire, and I begin to pant. My orgasm builds and every fibre of my being begs to come.

“Now take your fingers, place them on the top of your lips and close them tight together. Rub your whole hand over the top of your mons. No sneaking a finger between your wet folds. Good girl. Now rub yourself again with one finger, but this time I want to see really long strokes. Go from the very top of your slit to the opening of your pretty little cunt. Very slowly slide your finger up inside you… That’s too far. Slide back a little so you are just an inch inside. Now explore, feel yourself, what you like, what spots you like to press.”

The frenzy of lust streaking through my body makes focussing on Seb’s words difficult. I’m desperate to come. But I want to obey him. I’ve never touched myself like this before, never taken the time to, and I am struggling with how good I’m feeling. My whole body is alive with nerve endings ready to ignite. Small tremors beg to grow from within me, but I still want more.

“Sebastian,” I breathe out. “I can’t take much more of this.”

“Oh, but you can take much more, Isabel. On another night, I will make this last ten times longer. Now I want you to use both hands. Put your finger back inside your pussy and use the middle finger from your other hand to stroke your clit, but at half the speed that your mind is telling you. Now tell me, does that make you feel naughty?”

“Now, open your eyes and look directly at me as you make yourself come with both hands.”

I mentally battle to open my eyes and then to hold his gaze. My entire body heats as I look into the cool depths of his eyes. My clit throbs, my pussy contracts around my finger and I can feel that I’m going to come, right in front of him. I focus on my fingers and the feel of my wet pussy. I never imagined that I could touch myself in front of someone, let alone Seb. His words coax me deeper into my fantasy. My legs are wide, reflecting my vulnerability, but I also feel alive, every part of my body strung as taut as a piano wire, and it’s Seb who is playing me.

I want to please him. I want to earn the smile on his face, his approval at my obedience. I hold my stare and move my fingers to tip me over. Pleasure explodes from my core, rushing through my body in a heated wave. My voice sounds a desperate cry, deep and throaty. “Argh. Mmm.” I can’t hide how good it feels as I let go. I come hard and hot with Seb watching me, instructing me, and I can’t stop the appreciative noises that escape from my lips.

I try and re-orientate myself as I stand and take the few steps around the table to Seb. I look directly at him as I raise my hot and sticky finger to his lips. I wait for him to open them and tentatively push my finger inside his mouth. Immediately he envelops my finger and caresses it with his tongue. Desire pulses to my already wet sex. His own desire is unmasked as I look into his eyes. The blue is clouded with promises of yet more to come.
“Hmm. Thank you, Isabel. Well done. Now, how do you feel?” 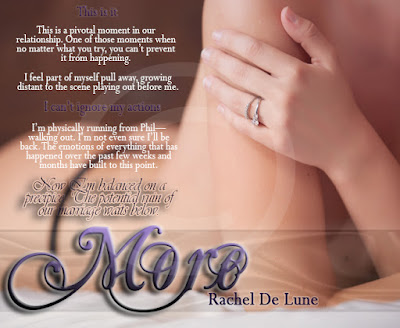 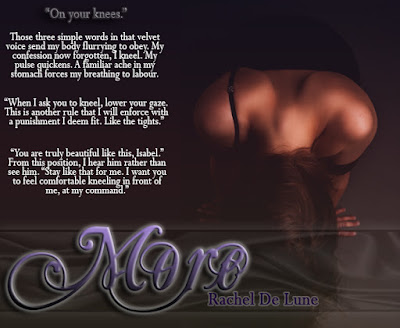 No other word but Smoking HOT can be used to describe More. Rachel De Lune takes you on a wild ride lost, love, heartache, sexy as fuck and so much more.

Isabel “Izzy” is married to Phil but it’s like she’s living with a roommate. He hasn’t shown her any affection in months and she tries to spice things up in the bedroom. It totally backfires and he is disgusted by her suggestions. Their marriage goes from bad to worse to can anything safe it…
Sebastian is a sexy as fuck dom. But has always been looking for that submissive that will stick around. All the others have left after a short time.

During one of her low nights when Phil storms out she decides to head to a bar to have a drink. At the bar she runs into Sebastian. As soon as they meet they have an electric connection. She can’t deny her attraction to him. Isabel freaks out and runs out of the bar to never see him again. The next day she is doing a presentation at work and no other than Sebastian is there. They are both shocked to see each other. They can’t take their eyes off each other. They exchange business cards.

But she’s still married even if she believes Phil been cheating on her for many years. But he won’t admit it. He likes having the trophy wife for work functions. Isabel says she wants out but she’s still married..
Isabel can’t deny her attraction or how Sebastian make her feel. She has never felt that way with Phil.
“I wanted more and he's given it to me. I wanted him to be gentle and guide me into this darker side of my sexual desires and he has. What else do I want from him?"

Can Sebastian give her everything she’s always wanted or is Isabel just Sebastian latest submissive and he’ll be done with her too? Can Isabel finally walk away from her marriage and take the biggest risk of her life on Sebastian?

I really loved More and Rachel De Lune writing. She really pulled me in and made me feel for both Sebastian and Isabel. There were definite times I wanted to slap Isabel but I never stopped rooting for her. Now I need Forever More to find out where their story is going next.

This is my first Rachel De Lune book and it definitely won’t be my last.