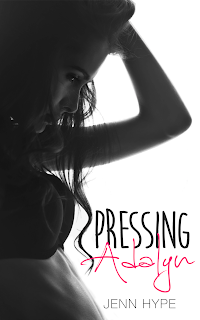 3 years after graduating college, Adalyn still isn’t sure what to do with her life. After a traumatic event in college throws her life off course, she bounces between jobs and men aimlessly until deciding to move from her small town in Ohio to live with her college roommate, Stacy, in New York.

Being closed off and sarcastic has helped Adalyn cope with her past, but when Ian, Stacy’s sexy and successful friend, comes into the picture, her carefully constructed defense mechanisms start to fail.

Determined not to let Ian get under her skin, Adalyn fights hard to appear unaffected by Ian’s charm and devastating good looks. Undeterred and unconvinced by Adalyn’s attempts to feign indifference to him, Ian continues to push Adalyn out of her comfort zone, unwilling to give in to her efforts to push him away.

Slowly, Ian starts to break through to the core of who Adalyn really is, but both of their pasts threaten to destroy any semblance of a relationship that could ever exist between the two of them. 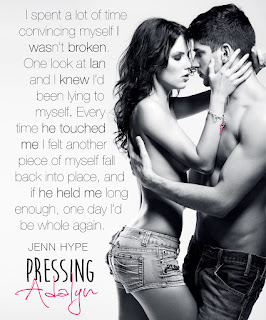 Stacy started to walk up to a woman sitting behind a large desk, but when she began to speak, a tall man appearing out of nowhere interrupted her. I turned slightly, pulling my eyes off of the hideous art, only to be faced with the most beautiful creature I had ever seen. Yes, creature, because there was no way the man standing in front of me was an actual human being. Maybe a mirage? I was really hungry. Maybe my blood sugar had dropped so low that I was hallucinating sex gods.

As I neared where Stacy and the sex god were standing, I realized I wasn’t unconscious and only dreaming about the delicious man candy in front of me. Nope, he was real. I could reach out and touch him if I wanted to. And I really wanted to. But I didn’t. I don’t know how I managed to keep my hands to myself, but I did. Go me!

He had to be at least 6’3”, maybe taller. Dark hair, a little longer on the top, perfect for running your fingers through. Dark eyes that could weaken the knees of all womankind and intimidate even the most powerful men. Chiseled, sharp features defined a face that, if he were scowling, would make him extremely terrifying, but he was smiling. A small dimple on his left cheek made his gorgeous face look more than adorable.

I’m pretty sure I died for a couple of minutes. Someone should have checked my pulse, or given me CPR. I’m confident that I stopped breathing. I’d never seen someone so perfect in real life. I literally wiped drool from my chin. Yep. I was drooling. Luckily no one was paying attention to me. How could they? The example of magical, manly perfection that was standing before me had pulled everyone’s attention right to him, and I was pretty sure I wasn’t the only one drooling.
And yes, you heard me right. Magical. The only way a man could be this stunningly perfect would be from the assistance of some kind of fairy godmother or a higher being.

Oh shit, I’d been standing there staring for God knows how long. Being caught staring was enough to make me feel embarrassed and vulnerable, especially when I noticed the smirk on his face. I only felt like an idiot for about two seconds though. Any time I felt any sort of ‘weak’ emotion I quickly replaced it with anger and bitchiness, a defense mechanism I had perfected over the years that ended up biting me in the ass every single time, but I was too stubborn to change.

I forced myself to tear my eyes away from his body, mostly because if I didn’t then I wouldn’t be able to stop trying to picture him naked. His eyes seemed like a safer option. So I looked up at him, right into his soul searching, will power devouring, panty dropping eyes. I was strong, I could resist him. Or at the very least, I was good at pretending.

That’s right, buddy. I’m immune to your tricks. I know I don’t know him, but I know guys like him. They know exactly how sexy they are and they think they can melt the panties right off of any woman they deem worthy of their charm. And let’s be real, if I wasn’t so messed up, my panties wouldn’t have melted, they would have gone up in flames. Unfortunately for him, my panties were fireproof when it came to his kind. No matter how devastatingly handsome they were.
Go ahead, slick, give it your best shot. Flash me those pearly whites.

Right on cue, he flashed me a grin that probably would have most women creaming their pants on the spot, as he held his hand out, expecting me to grab on for a friendly shake. I’m sure he thought that as soon as we touched I would swoon. Probably expected me to sigh dreamily and flutter my eyelashes at him. So despite my raising body temperature, shaky legs and quivering sex, I did what I do best.
I made everything awkward.

Author, mother, wife, singer/songwriter, aspiring comedian - I wear many hats. Some of them fit, some of them look ridiculous, and all of them are fun. Life's too short to take anything too seriously, so I don't.

Sarcasm is my go-to, especially when it's most inappropriate. Need someone to make an uncomfortable situation even more awkward? I'm the girl for the job.

I'm ridiculously A.D.D. and I own it. I have a serious addiction to ecards and the majority of my Pinterest account is dedicated to them. The key to my heart is glitter and caffeine - my needs are basic.

I'm a bookaholic and I crush hard on my book boyfriends and their authors. Some might call me obsessive, but I disagree. That word really doesn't do justice to how crazy I get when it comes to something I'm passionate about. I'm not afraid to go fangirl on you, so don't test me.

Anything else you want to know, feel free to ask. I'm an open book, and I love to hear from readers.

" I didn’t let men comfort me. I didn’t lay in their arms or fall asleep on their chest. I didn’t let myself be in any kind of vulnerable position around a man, regardless of whether or not I wholly trusted that man."

Pressing Adelyn was a breath of fresh air!  Filled with sarcastic humour and undertones, Jenn Hype put a new twist on the typical love story. Being different is hard, but being different with a past is so unbearable, all you can do it put up walls. When Ian and Adelyn meet, the wrecking balls come out, and the walls slowly crumble, but will their pasts let the walls fall all the way down?

" “You put on a good show, but I know you feel it, sunshine. Your body craves mine as much as mine craves yours. You might mask your desire as hostility, but I see right through your bullshit. I will break through those barriers of yours, I can promise you that. I won’t give up until you are writhing underneath my body, spread out on my bed, screaming my name in pleasure.” "

With a witty and defensive personality, Adelyn meets her match with Ian. Confident and cocky, Ian puts on a good front. But what's beneath both of their hard exteriors is what kept me reading. With tragic pasts, Jenn writes about loss, broken hearts and numbness.  Your heart can't help but feel for both MC's.  I was drawn to each of their stories, and instantly fell in love with both of them!

" As I drifted off to sleep with a smile on my face, anxious to see what tomorrow would bring, I couldn’t help but think that it had only taken this girl less than twelve hours to flip my life."

I am very impressed to know that this is Jenn Hype's very first book!  She is a very strong and talented writer, and her work can only get better!  I look forward to reading more for Jenn!

" But the thought of her feeling nothing, of her not wanting me and not wanting to even try...I couldn’t bear it. It would tear me apart, but no matter what she said, I was staying. If all I could be in her life was a friend then I would take it."

A drunken night out with her best friend Adalyn lands her in jail. Not that she’d done anything wrong, except for hit on the incredibly sexy cop who showed up to take a report from Adalyn who’d had her purse stolen.

Chad, a no-nonsense officer who takes himself and his job very seriously, has no patience for Stacy’s shenanigans and over the top flirting. So he hauls her to jail to teach her a lesson, but didn’t expect it to cause Stacy to become a regular fixture in his life.

Stacy ends up befriending Chad’s partner, Joe, who keeps her company after Chad dumps her in a holding cell for the night. Joe and Stacy hit it off right away, resulting in Stacy always being around, no matter how much Chad tries to avoid her.

The constant bickering and sarcastic insults only heighten the sexual tension between Chad and Stacy, and Chad’s ability to control his emotions and actions becomes increasingly difficult.

A low scale war is declared between them, but their actions continue to both hurt each other while simultaneously pulling them together. When the fighting leads to literal bloodshed, they begin to wonder if they both should surrender before the war destroys them both. 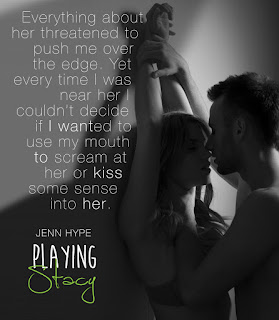