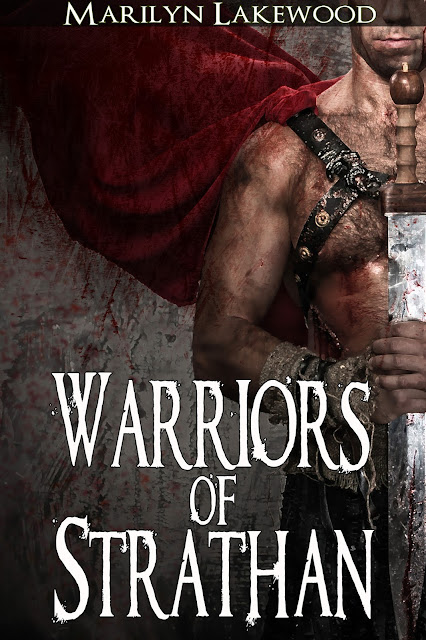 Kellus Aquitar is drawn into the ancient enchanted land of Strathan where he finds the love he craves, a challenge he cannot refuse, and the cause he was destined for.

To keep his sister and parents safe from Rome’s persecution, Kell has been forced to lead his elite cavalry on constant campaign against the enemies of the Republic. Now at thirty-seven, he is weary of senseless bloodshed, petty Roman tyrants, and sleeping in tents. Above all he is tired of sharing women with other men.

On a secret mapping expedition in the mysterious isles of Britannia, his journey takes him away from everything he knows when he discovers a hidden, mysterious world and meets Leis, a woman he desires more than life itself. But to remain in the timeless realm of Strathan he must overcome the endless reach of Roman vengeance -- and his deep aversion to sharing.

When every warrior is needed to battle the monsters that threaten Strathan, Kell must devise a way to guard Leis, while protecting his sister and parents from Rome’s wrath in the outside world. His plan calls for sacrifice… dark, bloody, and dangerous…but if he survives, he will possess the woman he loves, keep his family safe, and secure his destiny with the Warriors of Strathan.

Warning: Warriors of Strathan contains explicit sex and violence.  Kell, the hero in this story, lives in a different time and culture. His world is harsh and without compassion. It does not conform to current sensibilities, ideals, or laws. There are brief mentions of non-consent in the story, but they are written without extensive detail. 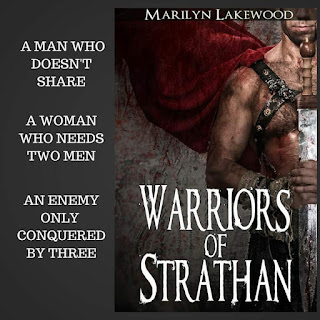 “Are you replete with food, Roman?”
Kell nodded. “My thanks, I was hungry. Your actions make me welcome.”
“Are my words less so?”
“Only in tone. I would not cause imposition.”
“You do not impose—you are crucial here.”
“I, alone, cannot win your cause, Torr.” Why these people thought him vital to the upcoming battle, he could not reason.
“You will aid it.”
Kell drew a patient breath. “If you take me back, I can bring soldiers who are loyal to me and are willing to fight.”
“They would be killed.”
“I will not?”
“No. You have purpose in Strathan. Come, I will show you to a sleeping chamber.”
Kell followed Torr into the arched passageway that he, like the warrior, was drawn to. The torchlight cast wavering gold light on the stone walk and on the imposing oaken doors they passed. At the end of the hall, two portals stood opposite each other.
Torr stopped, indicating the open door. “Your rooms are there. You should find what you need within.” He turned toward the closed door, his hand poised on the handle. “My chambers are here. Good night, Roman.” The warrior pressed the latch and entered.
A sudden keen instinct to help these people sent Kell after the man. He stepped into the warrior’s doorway before the portal shut. “Torr, I meant it. I can bring men to aid your cause…”
Kell had not intended to let his eyes wander to the private interior but when they did, his gaze swept past the sumptuous appointments, the finely carved furniture and the huge, fabric draped bed. Instead, his attention seized onto the provocative centerpiece decorating the space.
A woman, suspended by her wrists, hung in quiet tranquility. She was completely nude, her beautiful form, taut and elongated by her position. Her arms were linked together but her ankles shackled apart. Only her toes touched the stone floor.
Her head lolled back, and shiny, bronze-gold hair draped to her waist. She looked unblemished and alluring beyond measure.
His mouth went dry and his cock filled tight with blood, yet he managed to rasp, “A pleasure slave?” Likely chained for her master’s pleasure. A common enough thing in his world. Kell’s fingers gripped the doorframe for support—the impact of the woman so strong.
“In a fashion,” Torr answered cryptically. He paused, halfway into the chamber. “Do you find your room deficient?”
“No.”
“Then we will talk in the morning.”
Neither man moved.
“Your bed awaits next door, Roman.”
“I would buy her from you.” The words came before thought, driven by intrinsic need.
Torr shook his head. “No amount of coin could equal her value. Tomorrow you will understand more of her worth.” The warrior stepped into the doorway and nodded in dismissal. “Rest well, Roman.”
They both knew he would not. 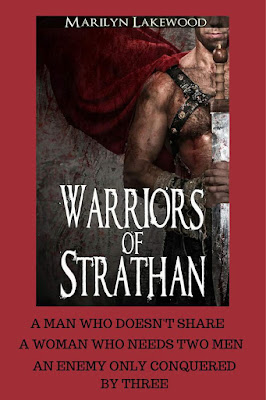