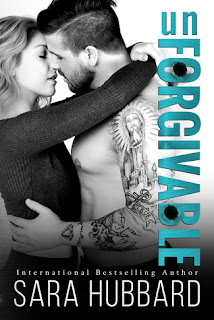 
From international bestselling author, Sara Hubbard, comes a contemporary novel about the choices and consequences of a young woman in a cruel city.

Beth is a twenty-four-year old woman raised by the mob. She’s never gotten herself into a situation her family couldn’t drag her out. So when those closest to her wind up dead or missing in action she’s left to her own devices, and she quickly realizes how hard it is to survive on her own.

Damien is a corpsman coming home from war with the hopes of starting over. He knows what he wants and he’s accustomed to getting it. So when he finds himself falling for a girl stumbling through life—like he once did—he’s determined to help her, whether she wants help or not.

Sara Hubbard is a romantic fiction author. She loves alpha males and the sweet, sassy women who make them believe in change. Sara lives in Nova Scotia, Canada with her two children (four if you count her husband and her needy labradoodle) and works as registered nurse.


About twenty pages into this book, I was struggling to figure out who the characters were, why they sounded familiar and what was going on.  I remembered that I read the first book in the inCapable  World series, but it had been a while so I went back to book one and refreshed my memory.  It was like a light bulb instantly went off and I was able to go back into book two with no confusion.  I say this because I think you could read this as a standalone, but I wouldn’t recommend it, as you would not get the full effect of this story without it.

Beth’s standards wasn’t too high when it came to any man that would make her feel wanted and loved, even if only for one night.  Her future at the time consisted of working at the bar her Aunt Mona owned and preparing to take it over when the time was right.  One night of fun with her friend, she made a bad choice that put her friend’s life in danger.  The guilt pushed her to the point that she knew it was time for a change, but a change to what?  Mona, pointed her to the perfect man, Damien and reminded her that they just didn’t know they were meant to be yet but it was meant to be. The young woman behind the "go to hell" hard shell broke my heart and it was hard not to love her.

Damien is a former Marine, trying to get his life back on track after a bad deployment and a nasty ex girlfriend.  He and Mona had established a friendship via pen pal methods, so Beth was no stranger to him.  He had the upper hand in realizing what Beth needed and how to handle her and I have to admit I found him heart melting HOT while he became a hero in this story. He was seriously everything you could ask for from a fictional ex military book boyfriend.

One day at work, Beth’s world came to a devastating stop.  The few people she had trusted turned out to not be who she thought they were and death reared its ugly head. It was time to take her bag and run from the enemy that wanted her and her uncle dead.  Turning to the only trustworthy person she had left, led her straight to the person she least suspected, Damien.  Now was his time to take care of Beth and teach her that there was more to her than a beautiful body.
The rest is a highly intense story that will have you on the edge of your seat till the very last page.  Be prepared to enter the world of feuding mobs, loss and heart break, redemption and a passionately hot love story between a sexy warrior and a stubborn broken woman. What more could you ask for?   The story is epic, the characters will devour your heart and mind as you read and this book will leave you demanding for more.