**Blog Tour** An Evidence of Magic by Kris Michaels and Patricia A. Knight

Book: An Evidence of Magic 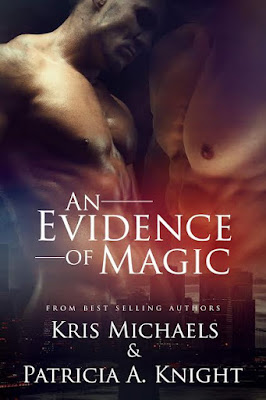 Goodreads
Synopsis
Forty-year-old, hard bitten, foul-mouthed, homicide detective, Hiro Santos, suspects the owner of the art studio committed the gory killing. Too bad. There are other things he'd like to do to the gorgeous young man than book him for murder. Worse, his sexy suspect is certifiable. The nutcase claims he's some kind of high wizard from an alternate reality and needs Hiro's help to save their worlds.


While the striking Sable Campion appears a youthful twenty-five, he’s endured over two-hundred lonely years as guardian of the portal between Everlight and Elysium. None of those centuries offered him any experience finding a vicious killer. That's where Hiro Santos comes in; but convincing the virile detective to trust Sable will take all his persuasive skills...and perhaps a bit of magic.
The magic they find in each other's arms will rock each of their realities. 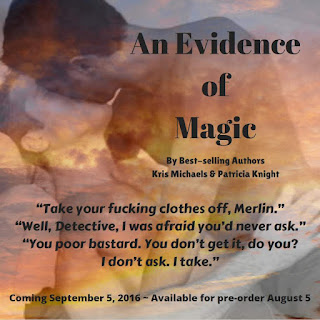 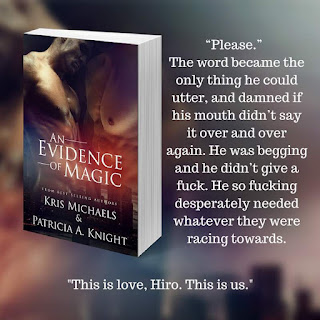 Patricia A. Knight is the pen name for an eternal romantic who lives in Dallas, Texas surrounded by her horses, dogs and the best man on the face of the earth – oh yeah, and the most enormous bullfrogs you will ever see. Word to the wise: don’t swim in the pool after dark.
Connect on Facebook - https://www.facebook.com/profile.php?id=100012343604488&fref=ts


Kris believes in meeting life head on…as long as there is an ample supply of coffee, whiskey and wine!  She believes love makes this crazy life worthwhile.  When she isn’t writing Kris enjoys a busy life with her husband, the cop, and her two wonderful sons.
Connect on Facebook - https://www.facebook.com/profile.php?id=100008428034581 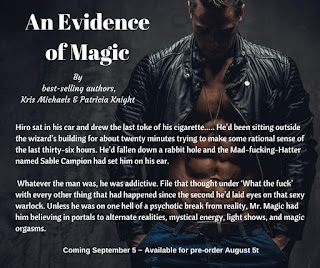 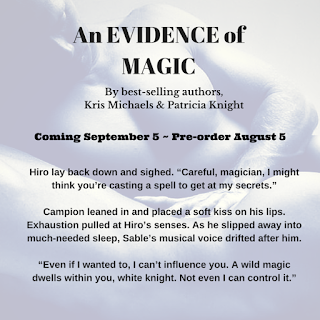 Magic, lust, portals...An Evidence of Magic is a roller coaster ride. Taking a trip from reality should be a breath taking, relaxing experience. But when a string of murders leads Hiro Santos to Elysium, mystery, lies, and a stunning magic man makes Hiro see this new world clearly. Sable has been lonely for over 200 years. When he crosses Hiro's path, an undeniable force draws the two men together. But magic can also push things apart.  Can Sable prove to Hiro that he's more than a magic show?

"He’d found the place he belonged, the person he would spend the rest of his life with, and a direction to follow. He couldn’t wait to show his man just how magical their life together would be."