Some people measure life in hours. Days. Weeks. I measure mine in kills. A covert military mission gone wrong robbed me of my memory and any link to my past. This is my existence now. I execute and survive. Nothing more, nothing less. I was ready to write Isabel Foster’s name in my ledger of unfortunate souls until she uttered the one word that could stop the bullet meant for her. My name.

She knows my face. She knows me. She’s the key to the memories I’m not sure I want back. Now nothing is simple. I still have a job to do, and my soul isn’t worth saving. I’m not the man she thinks I am. I can’t love her. And sparing her life puts us both in the crosshairs.

"Get ready for a sultry, suspenseful ride that you won't soon forget. This book has it ALL."
~USA Today bestselling author Angel Payne 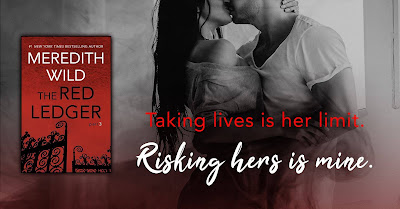 Waiting for the next one is pure torture...this series is seriously addicting...I’m obsessed…

The incredible adventure that we started back in part one of The Red Ledger series continues, with Isabel running from more than just those that want her dead…  Finding herself in New Orleans, with a completely new look, and a new sense of strength, Isabel seems to be on the path to redemption.  When plans are hatched, and old enemies confronted, worlds collide with brutal effect.  Tristan and Isabel find themselves closer than ever, until a new and unfamiliar vulnerability brings an unforgiving distance that could destroy them.

I swear...I can’t EVEN with this series!!!  My newest obsession, courtesy of the indelible Meredith Wild, only grows more intense with every single word, paragraph, chapter, and installment of The Red Ledger Series!  These AMAZING characters leap off the page, and continue to add new dimensions to their personalities with every page turned! The action only intensifies in this installment, and the sizzle...well...it REALLY sizzles!  I can’t believe I have to wait again for the next one...that sit-in I threatened may become a real thing!  I need part four, Ms. Wild! Hmmm...I hope she’s listening...

Meredith Wild is a #1 New York Times, USA Today, and international bestselling author. After publishing her debut novel Hardwired in September 2013, Wild used her ten years of experience as a tech entrepreneur to push the boundaries of her “self-published” status, becoming stocked in brick-and-mortar bookstore chains nationwide and forging relationships with the major retailers.
In 2014, Wild founded her own imprint, Waterhouse Press, under which she hit No. 1 on the New York Times and Wall Street Journal bestsellers lists. She has been featured on CBS This Morning, The Today Show, the New York Times, The Hollywood Reporter, Publishers Weekly, and The Examiner. Her foreign rights have been sold in over 20 languages.
Living on Florida’s Gulf Coast with her husband and three children, she refers to herself as a techie, whiskey appreciator, and shameless sun worshipper. Find out more about what projects she’s working on next at www.meredithwild.com.
Social Media Links
Facebook: www.facebook.com/meredithwild
Twitter: www.twitter.com/wildmeredith
Goodreads: www.goodreads.com/meredithwild
Instagram: www.instagram.com/meredithwild
Pinterest: www.pinterest.com/wildmeredith