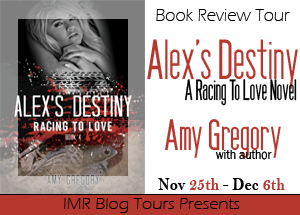 Her destiny was written for her, long before she was ever born.  She embraced it, wanting nothing more than to give everything within her back to the sport in which she was considered royalty.  Her family’s legacy would live on, revered by all.  And she thrived on the long work days she spent teaching at the academy her blood was tied to.  Alexandra Sterling needed that dirt track as much as she needed her next breath.


That same track was the one that drew in a young student years before.  Alex had given her heart away the day they met, knowing that he belonged to only her.   For years she’d waited, knowing without a single doubt that he’d make her his when the time was right. 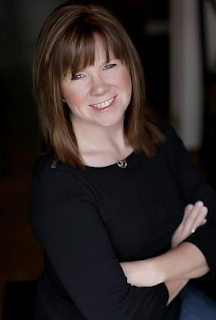 When asked ‘when do you have time to write’, Amy Gregory simply laughs.  The real answer is, “in bits and pieces”.  She and her husband live in Kansas City with their three fantastic kids that keep them running in three very different directions.  Because she sits so much, she always carries a notebook with her at all times.


She has an off the wall, snarky, off the cuff sense of humor that often shocks even those who’ve known her for years.  And she loves that her children have all been blessed that ability to make others laugh as well.  At least she’s grateful most of the time!  Her husband often teases her about how she “makes this stuff up” when he’s reading a piece of her work. The answer—“it just comes to me when I’m typing”. Scary thought, huh!

As soon as Wendy sent me the synopsis to this book I knew I had to read it. I practically begged her to allow me to do this one.  It pulled me in right from the start and I couldn’t get it out of my head.


I was a bit concerned at first as I hadn’t read the first 3 books. I thought I’d have missed something important, but was quickly proven I had nothing to worry about. Alex’s Destiny can be read as a stand-alone, although characters from the previous books are present.


Alex has always loved Dallas. Ever since she was 3 years old and grabbed his hand. There was no doubt in her mind. She was his, he was hers. They were soul mates and would be destined together. Yes there was a 7 year age difference and they were apart a lot of the time. But that didn’t deter her, she would wait.


“Alex was living out her dream, and she wanted nothing less than the same for him, because she loved him.”


He’s loved her just as much; however he has always tried to ignore his feelings towards her thinking its wrong. She’s too young for starters and she’s like family to him. He has a hard time with this throughout the book. And as a result of this he inadvertently hurts Alex when he returns home for a visit.


“But dad,”- Dallas shook his head, then defeated he lowered it into his palms-“I don’t want to feel this way. I shouldn’t feel this way-it’s not right.”


“You are not related. There’s nothing wrong about it-except what you did this week.”


It’s after he leaves that the story really takes off.


Alex is such a strong character. She’s beautiful, passionate and brave. She’s wealthy, but does not take her wealth for granted. She doesn’t care for material items, she would much rather spend her days at the race academy her family owns and teaching the students there.


However one night, that all changes.  After something horrible happens to her, she disappears into a deep, dark place and just gives up on everything. Instead of feeling like a victim, she feels “dirty”, tainted and un-touchable. This book is Dallas struggle and journey to bring “his” Alex back, to bring back the shine to her eyes.


Will Dallas be able to bring her back? Will he be able to let go of his inner turmoil and finally have the type of relationship he wants?

I couldn’t help but be encaptured by the feelings and turmoil that both Dallas and Alex go through in this book. I smiled when they smiled and my heart broke when they hurt. There was also times when I just wanted to reach in, give them both a huge hug and tell them it will all be ok.


It’s a story of love, family and healing. And Amy, You really did hit the nail on the head with this. It was amazing...truly amazing. You made me feel connected to the characters and as a result felt every emotion pouring out of the pages and into me.


I am now going to go and read the other stories in the ‘Racing to Love’ series. I want to know everything about this ever-growing family.