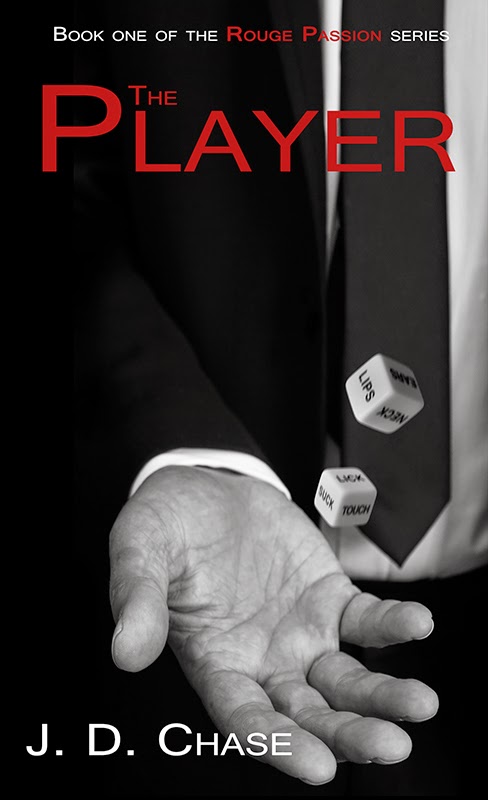 Bestselling erotic romance author, J.D. Chase, has a new two part series, Rouge Passion - and it's hot! There's a new dirty talking alpha in town …
Feisty redhead, Isla Hamilton, is the ambitious Assistant General Manager of a luxury Kensington hotel. When the hotel is sold, she is desperate to become the new General Manager. There’s just one problem standing in her way, and it’s standing over six feet tall - the king of arrogance and inappropriateness, Xander Rhodes. Her mind hates his obnoxious, godlike presence but, no matter how hard she fights it, her body reacts to his distinct style of directness, particularly his dirty mouth, and maintaining a professional distance soon becomes difficult.
Events from the recent past haunt her, forcing her to swear that she’ll never give another man a chance to hurt her. But Xander isn’t interested in commitment, he’s too busy battling his own demons that are shrouded in secrecy so he can’t hurt her, right? When he warns her that spending the night with him would only make her crave him like an addiction, she is sceptical and determined to prove him wrong. If anything, she’d make him crave her.
But will she be ready to handle the fallout if she succeeds?
Warning: adult content - dirty talk and hot sex may offend the prudish!

She pushed open her door and almost dropped her coffee. Xander was seated in her chair, leaning forward, his elbows on her desk and his chin resting on the tip of his steepled fingers. Isla stood, frozen in the doorway. Neither moved. Stalemate.
Eventually, Xander’s eyes swept from her head to her toes, lingering on her most curvy assets and making her feel naked once again. She gritted her teeth, determined not to show an outward response which she assumed was what he was attempting to provoke. If he hadn’t been sitting forward in her chair, she might well have brazenly returned the gesture, but her view was restricted. Frustrated, she inwardly railed at the audacity of the man, looking at her like that, choosing to ignore the fact that a tiny part of her enjoyed seeing the way his eyes drank in her voluptuous figure. She didn’t know how to respond so she simply stood there as if he was having no effect on her whatsoever.
When his eyes began to travel back up her body, she prepared herself for them reaching hers so she could show no reaction. However, when their eyes did meet, she felt the full force of his hunger. That’s exactly what it was. He wants me! He wants to rip my clothes off and take me anyway he can. No! He’d want to take me his way, and I’d bet my life that it would be fast, hard and totally euphoric. Her pussy clenched involuntarily at the thought of him – deep inside her. She felt heat spread from between her thighs and her nipples swell. She saw recognition in his eyes. Oh yeah, he knows what he’s doing all right.
‘I know what you’re thinking, Red,’ he declared. ‘Oh, I know you’d die before you’d admit it but I know exactly what you’re thinking.’ His voice was rich and deep, cocky yet seductive, having lost its usual hard edge.
She tried to laugh it off but she felt her cheeks flush. ‘Oh really. Do tell. What is it that you think I’m thinking, exactly?’
He raised his eyebrows slightly and nodded slowly. ‘Oh you’re good. Very good. I give you full marks for effort but you don’t fool me. I can read you like a book.’
‘Prove it,’ she challenged, walking over to her desk and leaning across it so that she was inches from his face. She looked him straight in the eye. ‘Tell me what I’m thinking right now.’
She could have hugged herself when she saw surprise register on his smug face, but he quickly recovered.
‘Think that one through, Red,’ he murmured. ‘If I did, what would happen next?’
She smiled. ‘I’m so confident that you’re way off the mark with whatever it is you believe I’m thinking, that I think you’d storm back into your office as I laughed and mocked you. And then you’d sulk and probably try to make my life hell until you felt better.’
She saw the muscles in his jaw twitch before he leaned forward, almost closing the gap between them and cloaking them with his unique intensity. She wanted to swallow but her mouth was dry. She wanted to back off but she couldn’t let him win. She’d upped the ante first; he was only raising his game to meet hers.
‘So I’m useless at knowing what you’re thinking but you’re confident you can predict my next move? Interesting . . .’ His voice was barely a whisper yet he still sounded cocky.
‘That’s right,’ she murmured, focusing more on those ravenous eyes than his words. His pupils were almost fully dilated and they seemed to be drawing her in. Oh my God, they are drawing me in . . . or is he getting closer?
His lips pressed against hers and, almost before she could register what was happening, his hands wove into her hair and she felt her lips open at the insistence of his tongue. Shock and indignation raged through her and she tried to pull away, but his hands held her fast as his mouth tortured hers. She thrust her hands against his chest in order to push him away but at that moment, his kiss became soft, tender even, and he gave a low moan. Something in that sound called to her and she felt herself weakening . . . then responding to his slow, almost reverent kiss.
Her libido woke from its slumber like a phoenix rising from cold, undisturbed ashes and she suddenly wanted it. Badly. She took the initiative, her hand slipping around the back of his neck as she deepened the kiss, devouring his mouth with her tongue. Fuck! This man can kiss! It felt like he was making love to her mouth with his tongue and it was intoxicating. She didn’t know what would happen next, she just knew she didn’t want that kiss to end.
The shrill sound of the telephone rang out, making her start. She sprang back and they faced each other, both visibly shocked by what had just happened. She reached for the phone but it stopped as she placed her hand on it.
Xander stood and walked back to his office, pausing at the door to throw casually over his shoulder, ‘Well, Red, I doubt you predicted that.’ 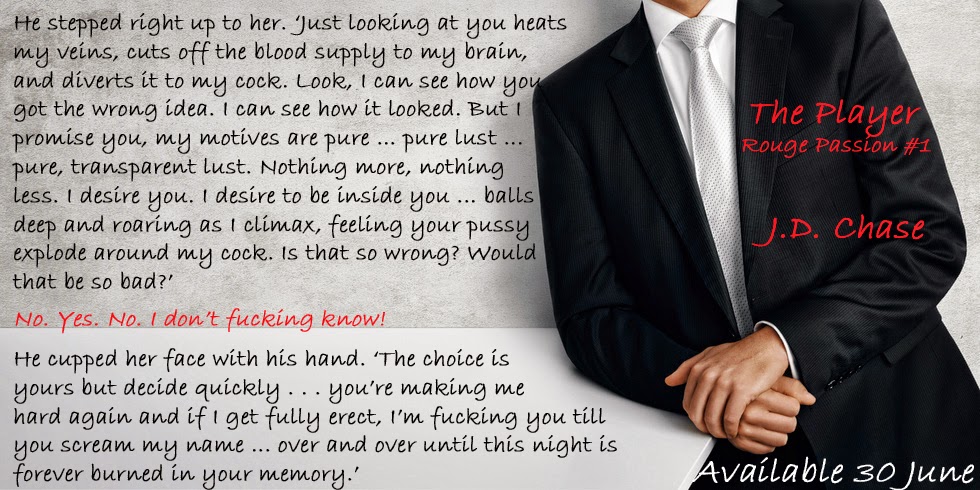 WOW The Player is one off the charts HOT book.  It will push your comfort level.  If you’re not a fan of vulgar, intense alpha male, sexiest book then this book isn’t for you.  You’ll need a cold shower after reading this one.
Isla is a curvy, passionate, and very stubborn woman. She has been hurt badly by ex.  She doesn’t trust easily and feels very lonely. She works for the hotel Xander just bought.

“Take your clothes off and show me that beautiful, shapely, womanly body so that I can worship every single inch of it.”

“The choice is yours but decide quickly .. you’re making me hard again and if I get fully erect, I’m fucking you till you scream my name …. Over and over until this night is forever burned in your memory.”

During sex he talks to Isla in a very crude vulgar manner. But it turns her on like she’s never been turned on before.  The sex is described in very explicit detail and tons dirty talk.
Xander tells Isla it’s only about the sex.

Can things change and they find happiness together or will it always be just sex for them?
There are many twists and turns to keep you reading. I couldn’t put my kindle down
Absolutely loved The Player.  I had to keep reading.  I was hooked from the first page to the last one.
No spoilers here but The Player ends with a cliffhanger.  Makes you want to throw your kindle but very excited to read The Redeemer coming Fall 2014.

J.D. Chase was born in central UK and has never moved very far away – she has a very close-knit family who she’d miss too much if she ventured too far away for too long. She has honours degrees in financial economics and education but now is a full-time sorcerer of shamelessly sexy smut. She’s always loved telling stories, either in verbal or written form since she was a child. She loves reading just as much as she loves writing because relishes the sheer escapism of losing herself in a book. A good steamy romance always does the trick … but shoe shopping comes a close second! She has a penchant for sexy alpha males and abhors wimpy female leads – this may be because she’s a feisty lady herself.
For many years, she has had more than a passing interest in BDSM (nod, nod … wink, wink) but found that she was often frustrated by the lack of books that were both well written and ‘true’ to the lifestyle and not totally stereotypical. So one day, she put pen to paper (well, fingers to keyboard) to write her own and the Orion the Hunter series was born. Little did she know that, at that moment, she was sowing the seeds of change. For, just a few months later, as a somewhat bewildered Amazon Kindle bestselling Indie author, she quit her career as an education professional to write full time. All of her releases (so far) have been kindle bestsellers - something that still astounds her.
The Player (Rouge Passion #1) releases just in time for her appearance at the fabulous Romance Author and Reader Event in Edinburgh ... she will probably do some fangirling over the other authors, as well as signing her own books. She’s also signing at the British Book Affair in London in April 2015.
J.D. loves to chat about books - hers and other authors' so look her up on social media and say hi.