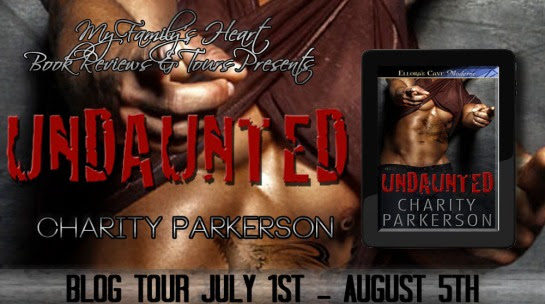 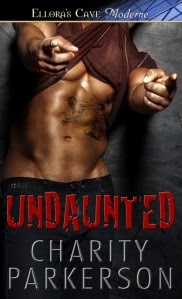 Book 2 in the No Rival series

Brothers, Rhys and Knox, have been in love with the same woman for years. While Rhys has been open about his feelings toward Mandy, he’s kept her firmly locked in the friend zone. That is, until a night filled with too much alcohol explodes into passion.

Unfortunately, while Rhys doesn’t remember a minute of it, Mandy remembers every detail all too well. As secrets and betrayals begin to unravel their friendship, Knox seizes his chance to—finally—claim Mandy as his own.

With two sexy fighters squaring off to win her heart, Mandy must decide which to choose—the charming reprobate who’s been the center of her desire, yet always wrecks her life, or the merciless bad boy who wants to give her the world.

Inside Scoop: This sexy tale includes male/male encounters that may have you wishing for two sexy fighters of your own. 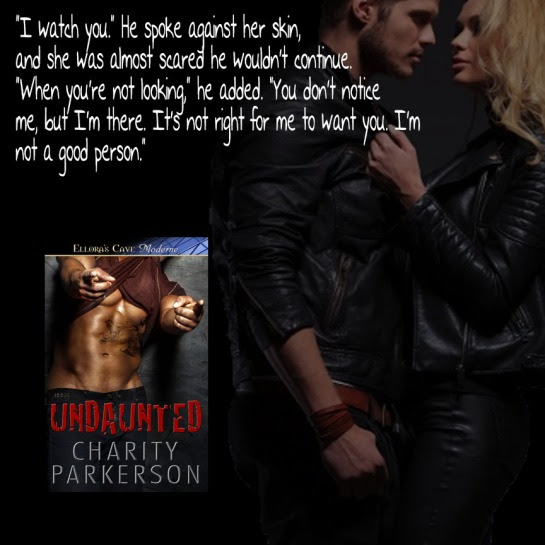 “Just tell us what you need and we’re your men.”

Ryan’s teasing, upbeat personality kept her smiling and she immediately felt at ease. “Get naked and act natural,” she said, somehow managing to keep a straight face.

Max groaned. “Great. Now there’s two of them. Don’t give him permission, Mandy. We’ll never get his clothes back on.”

“Fine,” she huffed, breaking out her best pout. “You will have to take your shirts off, though.” Max flashed a flirtatious glance her way that left her blushing as he stripped his shirt off. Oddly, she knew he didn’t mean it. Some people were overtly more sexual than others were. It was more of a vibe he owned. It was as if he couldn’t help himself. Of course, the knowledge did nothing to stop her face from burning every time he turned it in her direction. The third time blood flooded her cheeks, she felt Knox’s heat pressing into her back. Her heart slammed against her chest at the contact. He was everywhere. Overwhelming. Unmovable.

“He’s not for you.” His breath fanned across her neck as the whispered warning rang in her ears. The bite in his tone rolled over her skin. As he strode away, she watched the smooth movement of his body. Untamed. The word floated through her mind and she couldn’t let it go. He was a predator. Each time he was near, a shot of adrenaline pumped through her veins when she survived the encounter. One day, she wouldn’t.

After a few posed shots, Mandy focused on the action. “I’d love to get as many pictures as I can, if you want to take turns sparring. I’m not picky. However the three of you choose to pair up is fine with me.”

Knox gave her a sharp nod, and Ryan came over to stand at her side on the edge of the mat. Squaring off, Max and Knox circled one another. Staring down at the digital screen, Mandy zoomed in on Knox and her chest tightened even as she continued snapping pictures.

“Better Max than me,” Ryan said startling her with his tight tone.

Keeping her focus on her task, Mandy tried to keep the curiosity from showing in her voice. “Scared of getting your ass handed to you, huh?” she teased.

“An ass-kicking I can handle. I have no desire to die. Underground fighters train to compete with only one rule in mind. To the death. I mean, judging by Knox’s lifestyle, the money is good, but it takes a certain mentality to go into every match to kill or be killed.”

Mandy could hear her heart pounding in her ears. Her gaze slid over his body with a new eye as she searched for any truth to Ryan’s claim. The light glimmered off the silver rings in his nipples. Sleek muscles flexed and rolled as he poised for any opening. There wasn’t a hint of emotion on his face when he found one and took Max down to the mat. All the deep scars and bruises covering his body made themselves known in light of the new insight. Appearing content with a simple submission, Knox helped an unscathed Max to his feet.

Knox looked in their direction at Ryan’s words. Raw sensuality dripped from his pores. His eyes darkened with lust. Electricity charged the air between them. Excitement pounded through Mandy. Her nipples ached and a tingle began at the base of her spine.

Ryan cleared his throat. “Whoa,” he muttered under his breath. “He’s going to do such naughty things to you and I want details,” he sang as he walked away heading in Max’s direction. 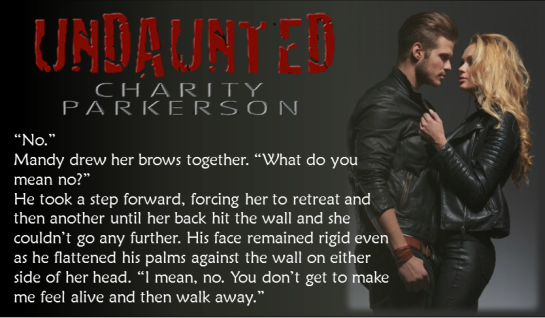 I really enjoyed this book. Although short, it really packed a punch!   With this book being #2 in the series, it was nice to reconnect with some past characters.  The new characters have so much life, and are very intriguing.

"Without thought, Knox pulled his shirt over his head, baring his torso. A blush touched her cheeks. He dared her to show him any weakness. Satisfaction roared through him when he room up his challenge, dropping her gaze to his chest. His nostrils flared as a sudden realization punched him in the gut. He wasn't going to stop until he had her. "

Of course, the sex was HOT!!!  Very HOT!!!  This was not your typical romance...the way the story played out was different than what I had thought!

'"I told you not to trust me," he reminded her in his most mocking tone. Need crawled at his spine. The nights he'd lain awake, fantasizing about touching her, caused his grip to tighten possessively at her waist. "Make me," she taunted recklessly.' 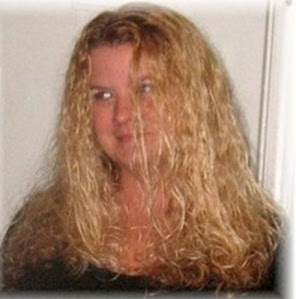 Charity Parkerson is an award winning and multi-published author with Ellora's Cave Publishing. Born with no filter from her brain to her mouth, she decided to take this odd quirk and insert it in her characters.

of Unsurpassed, and a skeleton hand ring.


OTHER BOOKS IN THE NO RIVALS SERIES 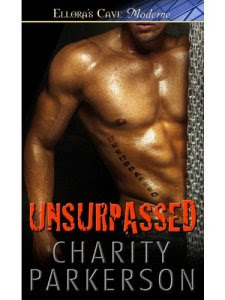 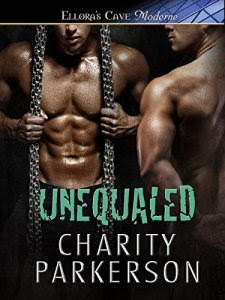