**Blog Tour** Because of Ellison by M.S.Willis 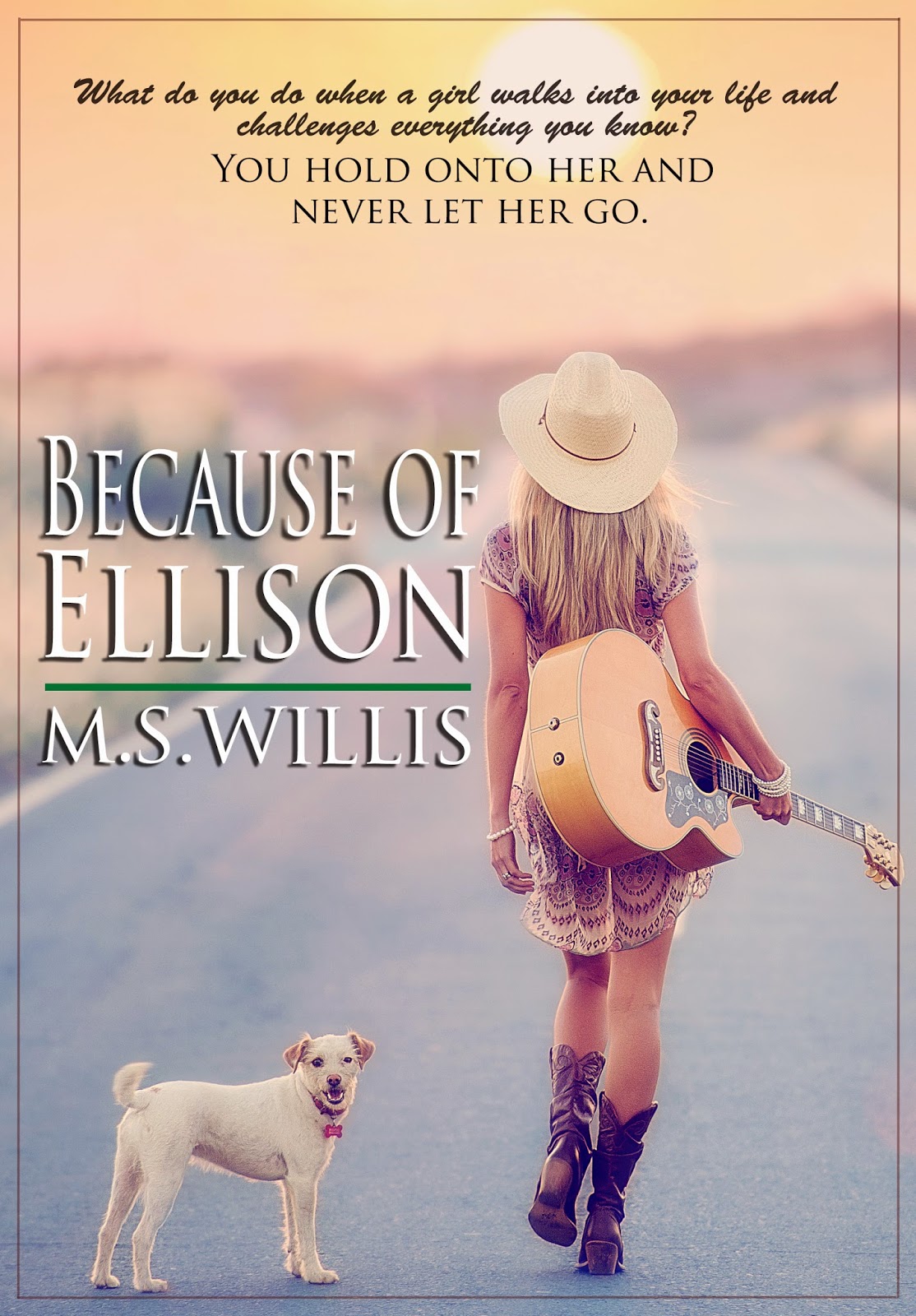 When I was nineteen years old, I lived for sex, drugs and a good party. I had it all - good looks, a fast car and a hot girlfriend. Nothing in life was more important.
That was, until I met Ellison James….
Since the moment I first saw her she was a raging bull; tackling me in the mud and throwing out insults as fast as her tongue could form the sound.
She was snarky
She was rude
And she pissed me off like no other woman could.
I lived beside her for a summer and in the three months that I walked by her side...
She opened my eyes
She changed my life
And she made me a better man

“Why do you keep chasing after me, Hunter?”  I could tell how raw her throat must have been by the scratch in her voice.  I was thrown off by her question and it took me a minute to formulate a response.

I didn’t answer her immediately because I felt like everything, all the times we’d spent together, all the smiles we’d shared and the tears that had fallen, and all the years I wanted to share those types of moments with her in the future hinged on my response.  Why did I keep chasing after her?  To most, she was just another girl in small town who was struggling like the rest of us in an attempt to find a place where she belonged in this world.  Most of those people weren’t lucky enough to know her like I’d known her – they hadn’t talked to her, hadn’t been shown the depths that existed within her.  Much like the moon and stars that hung above us tonight, Ellison was a light that wasn’t easily contained.  She burned bright enough to break through the dense fog I’d walked in my entire life.  Because of her, I’d opened my eyes when I hadn’t even been aware they’d been closed – and for that, I’d chase her forever.

Clearing my throat, I reached up and pulled her hand from my cheek when I turned to look her in the eyes.

Speaking quietly, I confessed, “Because you are a dream and someone once told me that if I had a dream, I should chase it.”  It was a simple explanation, but somehow I knew Ellison would understand the honest weight of what I’d said.

Her eyes blinked slowly as she studied my face and as usual, she did something unexpected.  She laughed.  The corners of my lips turned up when I tried to suppress my grin.  Her laughter sounded fragile, as if something so tiny could come along and break it apart - but it was there and my heart raced against my chest to hear it.

“That is probably the strangest thing I’ve heard you say yet.”

Those must have been fighting words, because the next thing she did was slam her hands against me with such force it almost knocked the air out of my chest.  I tried to hold on, but when she took both my nipples between her fingers and twisted, I released her in response to the pain.

“I know it did, that’s why I did it.  And you can expect that reaction from me every time you think you’re going to overpower and force me to stay still when I don’t want to!”
“Well, then fine!”  I shoved my chest out at her and held my arms out to my sides.  “Go ahead and rip them off then, El, because you can expect that I’m going to hold you every day until you stop breathing!”

She looked at me like I was nuts.  Her voice was a whisper when she asked, “Why can’t you just go home?”

We stood staring at each other for a few seconds.  It was eerily quiet where we stood, almost as if the birds and bugs had stopped to watch, curious to find out what would happen between us.

We locked eyes and I walked up to her.  Grabbing her by her chin, I tilted her angry face up in my direction and held on when she tried to pull away.

Author Bio:
M.S. Willis is a romance novelist whose debut novel, Control, was released in 2013.  Although currently writing in the romance genre, Willis has plans to expand her literary pursuits into multiple genres and has no fear conquering difficult subject matters in her writing.  Willis is a native Floridian who is also a photographer and musician.  When not absorbing herself in written, visual or musical expression, Willis is an adrenaline junkie, a ‘closet’ video game enthusiast, and an avid outdoors person and nature lover.