Strip Back brings you back to how the Naked Night's began. This is Eric's story. Back when life was a little less polished, and a whole lot harder.

Before there was Strip Teaser, there was Eric; manager and founder of the Naked Night’s male stripper troupe.

You wouldn’t think you’d be past it at 34, but that’s the position Eric found himself in, as well as newly single after finding his girlfriend in a compromising position.

Setting up the Naked Night’s wasn’t easy, it wasn’t fun, and it wasn’t without sleaze, but somehow he did it.

Strip Back is a humorous and steamy tale of one man’s journey to fulfill a dream. Not all male strippers are the same.

Passionate reader, blogger, publisher, and author. I love nothing more than helping other Indie authors publish their books be that reviewing, beta reading, formatting or proofreading,

Posted by Wendy Shatwell at 10:00 No comments: 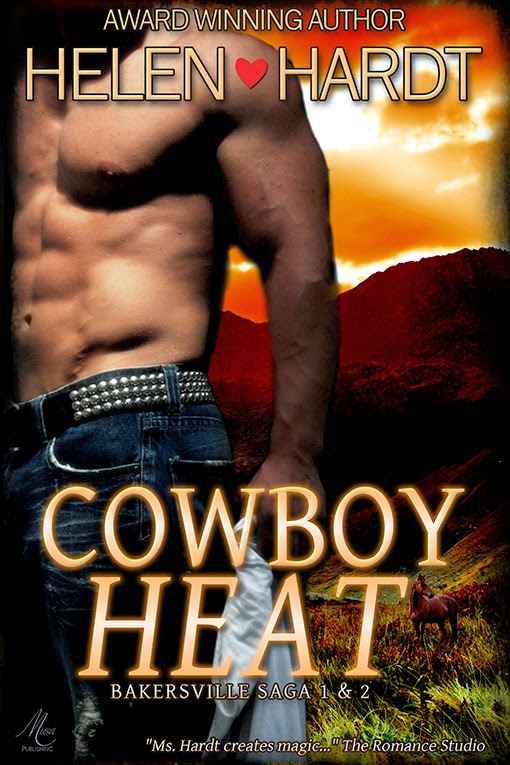 Dusty O’Donovan, an accomplished bull rider, isn’t afraid to ride El Diablo, a feisty stud whose owner, Zach McCray, is offering $500,000 to anyone who can stay on him for a full eight seconds. Though Zach refuses to let a woman ride his bull, he's intrigued by the headstrong Dusty, who he last saw when he was thirteen and she was six. Sparks fly when they’re together, but will Dusty’s secrets tear them apart?

A Cowboy and a Gentleman

Newly divorced Dallas McCray wants a sweet country girl like his sister-in-law, so why is he lusting after the new veterinarian in town, striking New Jersey transplant Annie DeSimone? Also divorced, Annie yearns to leave her difficult past behind and start a new life in beautiful Colorado. Sparks fly between her and handsome cowboy Dallas, but attraction and emotion aren’t always enough…especially when a cowboy has vowed never to make the same mistake twice.

These two are downright lovable! You are rooting for them to get together from the get go. The chemistry between them is smoking HOT, and…once they get in bed you will need a fan.
~Guilty Pleasures Book Reviews

Holy smokes, that was hot. This is a true erotic romance. There's a lot of sex, but it was there for a reason… I cried twice (not in a bad way) and had quite a few hearty chuckles at the subtle humor… I got my tidy happily-ever-after ending and stayed up until 4:45 a.m. to get it. I read this through in one sitting, and started the spin-off, A Cowboy and a Gentleman, at 4:46… Helen Hardt isn't a one-trick pony: where Ivy League Cowboy has an underlying sweetness to it, A Cowboy and a Gentleman crackles with the fire of attraction between a more mature couple and has a lot more situational humor.
~Award Winning Author Holley Trent

Fast-paced and sensual, this story is a nice rainy-day read while you’re snuggled up next to your partner.
~Bibliophilic Book Blog

Praise for A Cowboy and a Gentlemen

This is a wonderful book! It has it all! It is so hot at times you feel like your e-reader just might melt and it also gets all your emotions involved… I could not stop reading it till I was finished.
~Guilty Pleasures Book Reviews

Heartbreaking, yet sensual and explosive, A Cowboy and a Gentleman is a true love story with real emotional depth and character development.
~Bibliophilic Book Blog

A yummy cowboy and a saucy Jersey girl make up this fun couple, and their chemistry is easy to believe. Both divorced, they each have pasts that they must overcome in order to move forward and love again. It was easy to cheer for both of them… The small town setting of Bakersville adds to this book’s appeal.
~Coffee Time Romance

Posted by Wendy Shatwell at 09:51 No comments:

How long would it take for him to turn into an ass again? She caught Jesse’s gaze and found herself momentarily mesmerized by his golden-brown eyes. What the hell?

HIS Desire (An H.I.S. novel) is a romantic suspense, stand-alone novel in the H.I.S. series released Nov 5th.

Can Jesse Hamilton, the head of H.I.S., protect his client when his past and his heart have put them both in jeopardy?

When FBI Special Agent Kate Ross is injured in a drive-by shooting, Hamilton Investigation and Security, Inc. (H.I.S.) leader Jesse Hamilton, believing she is the target of a killer seeking revenge against him, pulls the full force of H.I.S. into action to protect her.

Kate doesn’t believe Jesse, the only man to make her seethe one minute and lust after him the next, when he approaches her with a note from the Facilitator stating someone he loved would die shortly, and he knows in his gut it’s Kate. After a second attempt on her life, she can no longer fight his protection or her attraction to him.

After making a mistake that cost his wife her life, Jesse vowed to never love again, but Kate stirs something in him that puts his protective instincts into overdrive. Keeping her alive and out of his heart is more difficult than he expected. Then he makes a decision that could cost Kate her life. Is history due to repeat itself? 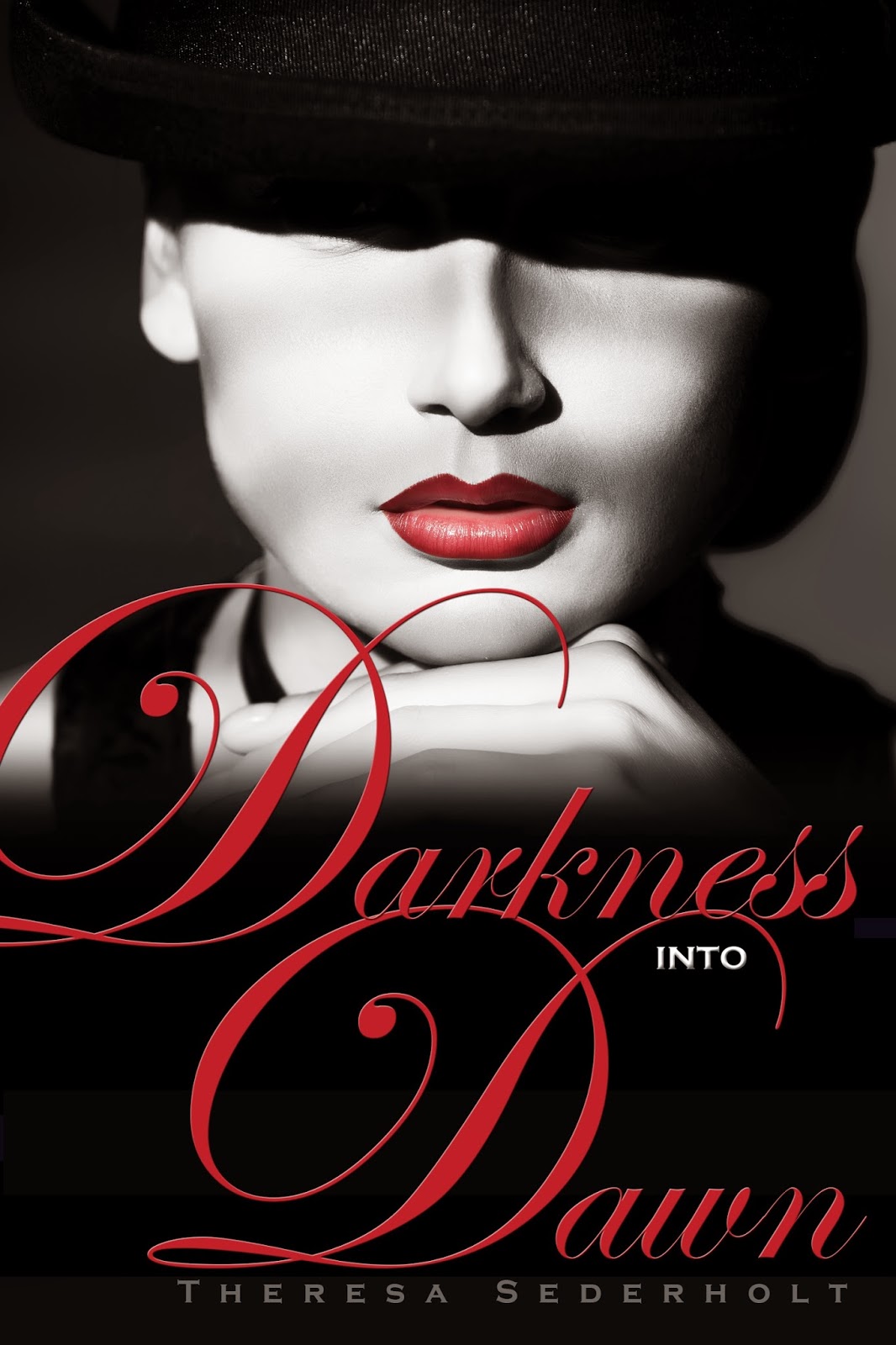 Tragedy has struck and now it is a waiting game.
New beginnings so full of promise, are overshadowed by a past that is continuously haunting them. Secrets are uncovered, as lies are revealed.
Lives hang in the balance, as old enemies return from the past and threaten their new found future. Raven and Jax will fight for their lives and the lives of those they hold dear.
Will they ever find out what it is to lead a normal life?
Will anyone truly be safe?
Too much has happened.
How can anyone survive this? 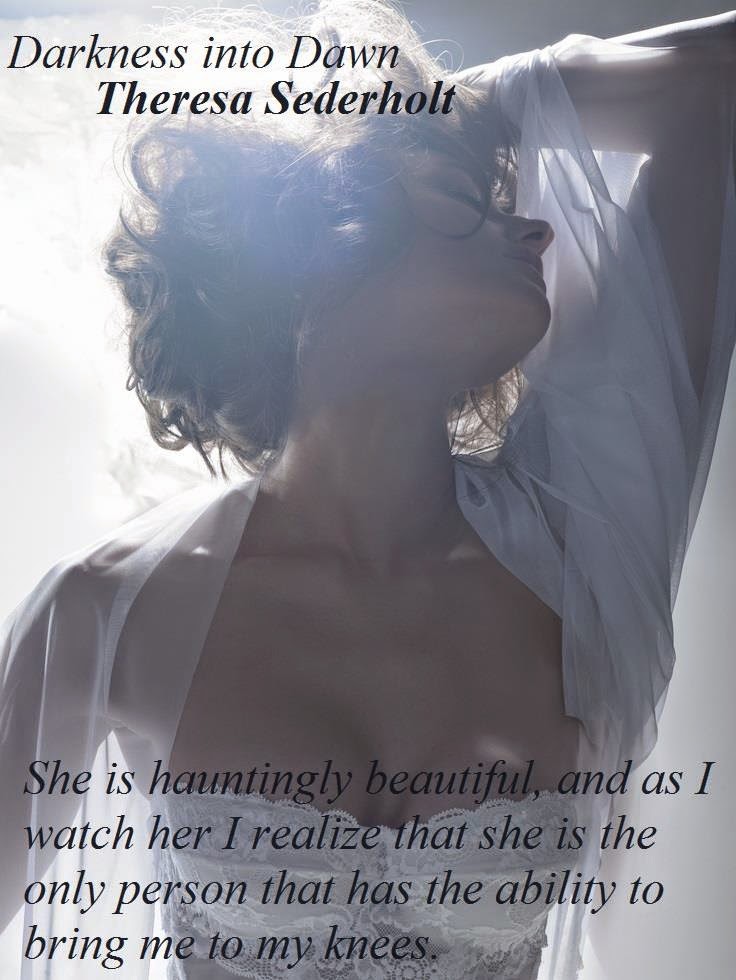 I was born in Brooklyn New York. I am old enough to know there is no luggage rack on the hearse. I am married to a Professional Chef.
I have a son who is a Research Chemist and a wine maker. Yep I'm covered from the food to the drinks. I have 2 dogs Vito and Godiva.
I live in the United States. I've had so many different jobs, even I can't keep count.
I believe if you give a girl espresso and Nutella she can change the world!

Posted by Wendy Shatwell at 08:46 No comments: 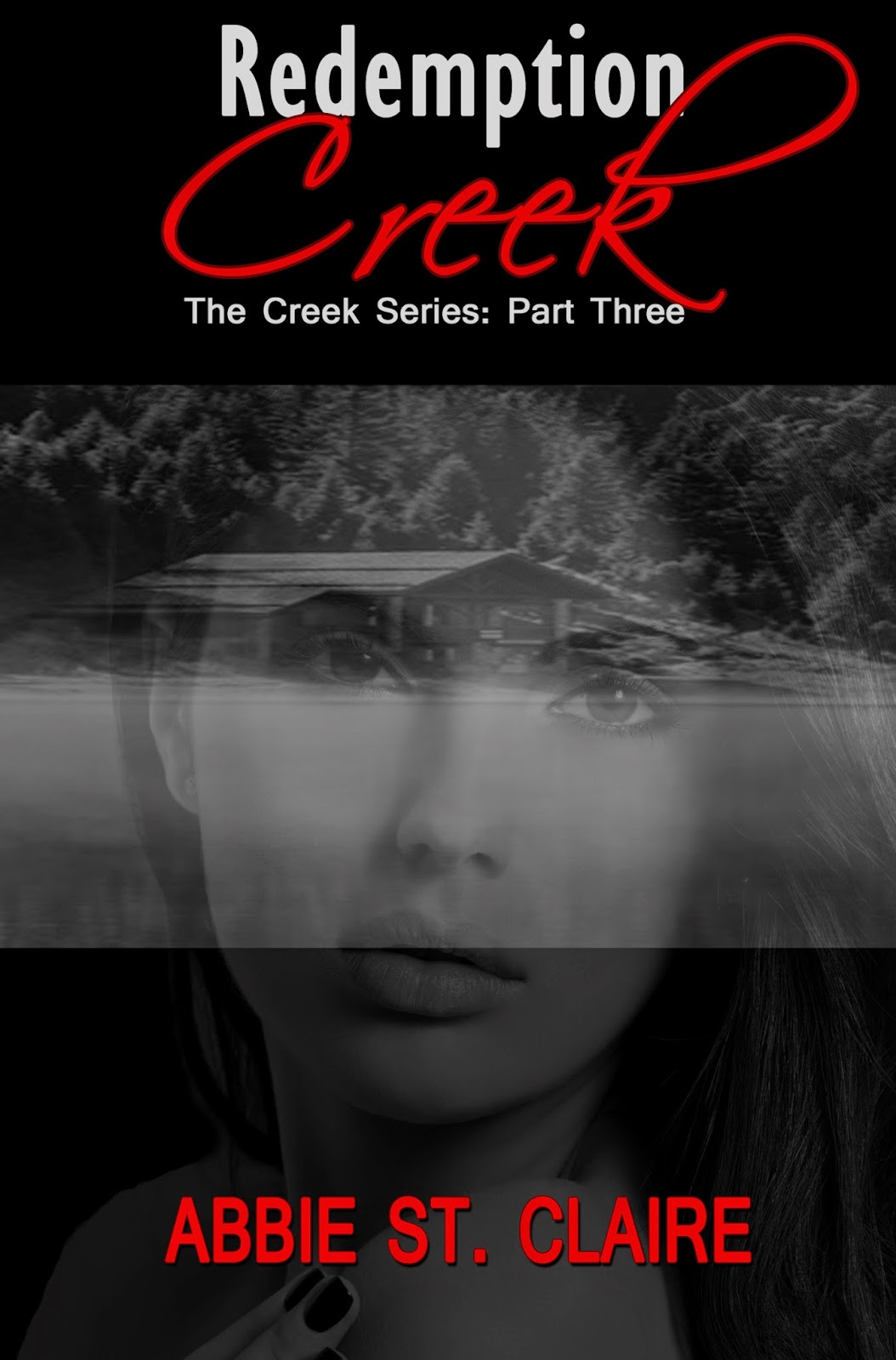 Between trying to sell the company and fixing his private life, Dane Lawrence underestimates Wrenn’s stubborn streak and seeks out the help of his grandfather. Little does he know, he’s being seriously played, but by whom?

Wrenn fights her attackers with everything she’s got and she’s grateful that Stephan taught her to shoot, but there were bullets that even she didn’t see coming.

When the nightmare’s return, Wrenn’s physical health in in serious danger. Dane whisks her off to France to save her from herself. Can Wrenn finally put the pieces of her life together and find the redemption she deserves? 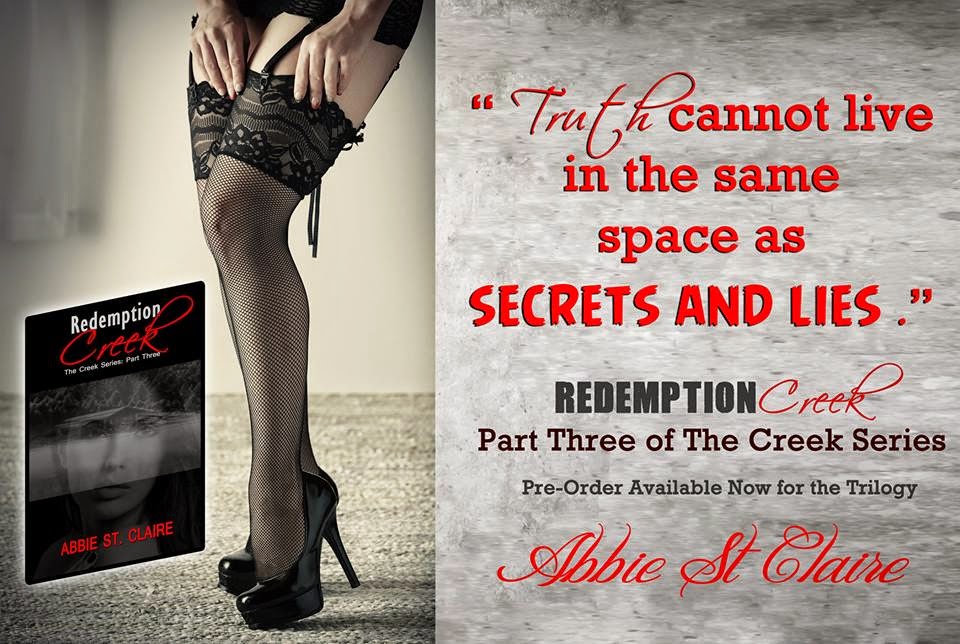 The Creek Series is a story about strength, heartbreak, relationships and about what's important in life.In Broken Creek we meet Wrenn. It quickly becomes clear she feels responsible for her mum, after her dads death, but with the encouragement of her local doctor friend she's persuaded to go away to college to study nursing. Her loyalties to her mum bring out mixed feelings with this decision and and it's interesting to see who finds cutting the cord the hardest.Wrens relationship with her ex, Stephan, is a great example of coming of age love, he broke her heart and her trust but is determined to make amends and win her back.When, in Forgiveness Creek, Wrenn's life is once again ripped apart she needs to find the strength to fight. Mr Lawrence, an elderly cancer patient, and his grandson, Dane provide her with the distraction, love and support she needs to move on. But life isn't that easy for Wrenn and when old and new demons resurface she's not sure her relationship with Dane can survive. Miscommunication proves to her that money can't buy everything and she runs, back to her home.Only to find in Forgiveness Creek that someone out to destroy her. And Dane has followed her. Forcing Wrenn to face get past she also finds herself in great danger. She must learn who she can, and can't trust  if she is ever going to look forward.The intertwining relationships in the series are fascinating and welded perfectly. There is hurt, love, suspense and sometimes upset, but also smiles, Wrenns 'marriage' to Mr Lawrence was magical. Wrenn can be a little frustrating but she's very real and human.

Go and give this series a whirl, book 1 is free! You won't regret it.

I’ve spent many years crafting stories in my brain. Finally, after the encouragement from those that love and support me the most, I put my first story out by self-publishing in 2013.

That first milestone created a writing monster in me that couldn’t be stopped and filled a void I cannot explain. Each story is a true gift from my heart and a sacrifice from my soul, since I find it difficult to let the characters go.

At home in Texas, my husband and I share our life with children that mean the world to us and include a couple of fur babies. When we aren’t busy watching sports and betting on the game, we are entertaining with friends.

I do have a writing cave, but honestly, most of my work comes from the kitchen, the heartbeat of any home. Since noise doesn’t disturb me too much when writing, I can write and keep the pulse on the family at the same time. And… Possibly enjoy my favorite, sinful treat… Cookie dough!

The writer-reader world is my lifeline. I’m addicted and each time I get a message from a reader, I’m thrilled. There’s quite a few stories planned for the next several months. I’m hoping the readers fall in love with my next series, The Creek Series. A story that is guaranteed to bring out all the emotions. 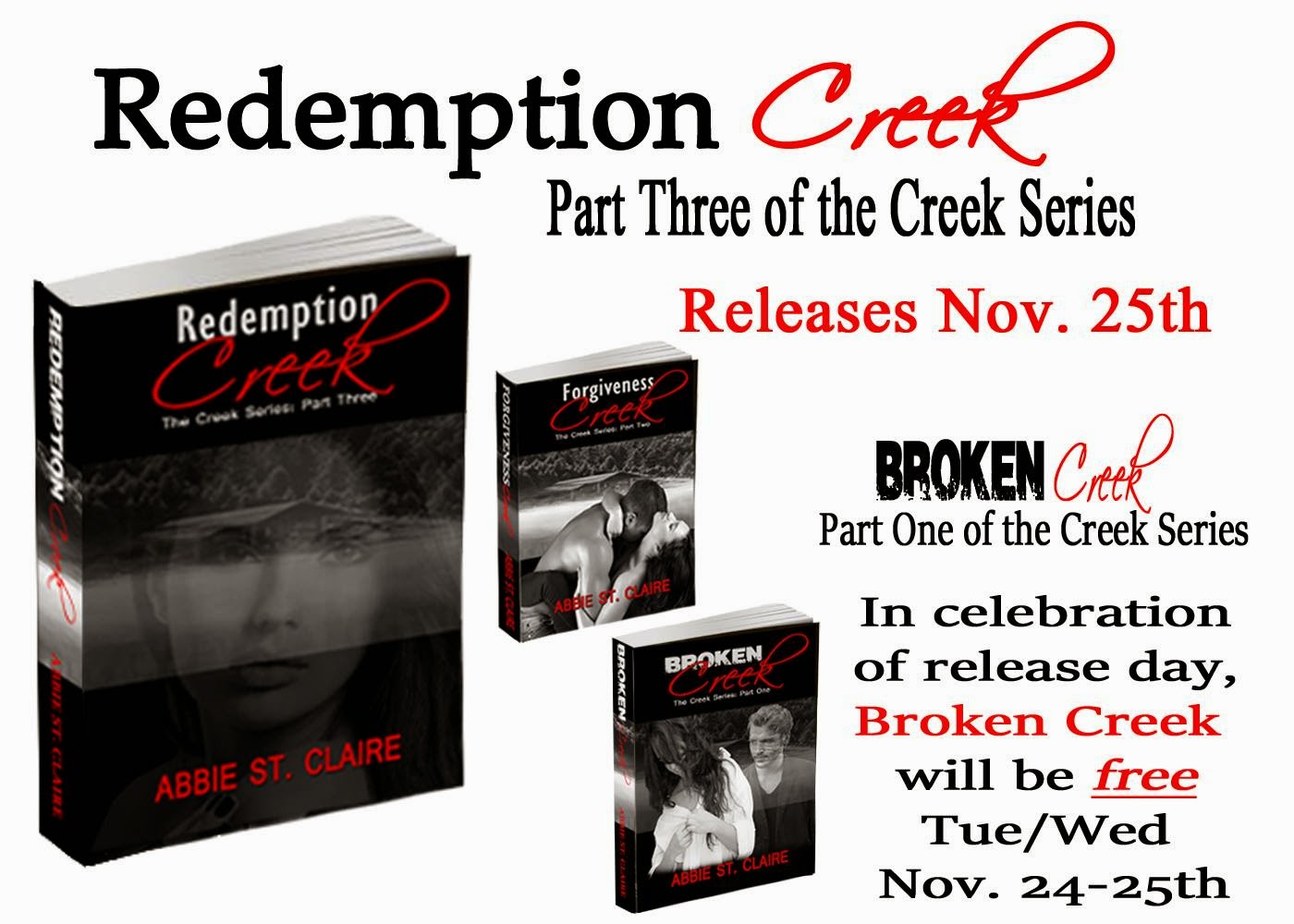 Other Books in the Series:

Posted by Wendy Shatwell at 09:38 No comments: