A city and a sport with something to prove—Meet the men who take that challenge.


They play hard. And live harder.

The newest series by Liz Crowe


Metin Sevim has it all. At the pinnacle of international soccer playing success, he has managed to craft a perfect world for himself along the way.


When fate strips him of free will and the ability to choose his own path, he retreats from everyone and everything, destroying his hard-won career in the process.


Dragged back from the brink by his desperate family, Metin reluctantly agrees to coach the Black Jack Gentlemen Detroit soccer team but remains debilitated by memories and loss. When a surprising friendship emerges, it renews his passion for life, providing much needed solace… and extreme complications.


A saga of family dynamics and gender politics that cuts across cultures and circumstance, Red Card illustrates the human capacity for forgiveness through the life of one man as he attempts to rebuild his shattered existence.

Microbrewery owner, best-selling author, beer blogger and journalist, mom of three, and soccer fan, Liz lives in the great Midwest, in a major college town.  She has decades of experience in sales and fund raising, plus an eight-year stint as a three-continent, ex-pat trailing spouse. While working as a successful Realtor, Liz made the leap into writing novels about the same time she agreed to take on marketing and sales for the Wolverine State Brewing Company.

Most days find her sweating inventory and sales figures for the brewery, unless she’s writing, editing or sweating promotional efforts for her latest publications.

Her early forays into the publishing world led to a groundbreaking fiction subgenre, “Romance for Real Life,” which has gained thousands of fans and followers interested less in the “HEA” and more in the “WHA” (“What Happens After?”).  More recently she is garnering even more fans across genres with her latest novels, which are more “character-driven fiction,” while remaining very much “real life.”

With stories set in the not-so-common worlds of breweries, on the soccer pitch, in successful real estate offices and many times in exotic locales like Istanbul, Turkey, her books are unique and told with a fresh voice. The Liz Crowe backlist has something for any reader seeking complex storylines with humor and complete casts of characters that will delight, frustrate, and linger in the imagination long after the book is finished.

If you are in the Ann Arbor area, be sure and stop into the Wolverine State Brewing Co. Tap Room—but don’t ask her for anything “like” a Bud Light, or risk serious injury.

Black Jack Gentlemen
The Newest Series by Liz Crowe
A word from the Author:
Beautiful men in a Beautiful Game
by Liz Crowe
There is a fair bit of furor about gays and lesbians in professional sports. But most of them remain secret, not eager to encourage the negative attention such an admission would engender.
Many of them have spent their entire lives to play at the levels they have achieved, pushing their bodies beyond what most of us can imagine. Sacrificing social lives, vacations and a lot of money in the quest for athletic success.  To risk that, just in the name of being “out” for most of them, is simply not worth it.
When I was contemplating an opening novel for my Black Jack Gentlemen series, it felt very natural that I lead with such a story. The extreme pressure professional athletes are under, especially in (American) emerging sports like soccer, can lead to emotional and physical breakdowns. Sometimes, all players have are their teammates—the only other people in their universe who understand what they’re going through. Many times they have spouses or other family members to lean on, but when I contemplate how many men and women suffer in silence, having to deny their true selves for the sake of their sport it saddens me that we, as a culture, seem to hold pro athletes to an even higher standard of behavior, at least sexually speaking.
Homophobia is rampant in most levels of society. But the vitriol among the ranks of professional athletes is especially strong. Recently, a semi-pro basketball player came out, and made a small blip on the radar. But any research into soccer in Europe and Africa will show that the institutionalized prejudice against gay men runs so deeply it is a wonder that any man would feel comfortable coming out in that environment.
There are notable exceptions. Robbie Rogers just joined the Major League Soccer (American) soccer team the LA Galaxy as the “first openly gay pro soccer player” back in May. His press mirrors the level that I describe for Nicolas Garza, the Spanish player who leads the Black Jacks. I read a lot about him, as I developed the relationship between my two main characters in “Man On,” Nicco and Parker Rollings. More and more European players are pondering their sexual status, going so far as to “remain anonymous” but state that they are “considering coming out” to the media.
It is better than it was. But it definitely not a healthy situation for men and women who, just because they love individuals of their same gender, feel compelled to either hide their true selves or give up the game in order to claim their long-term lovers in public.

In Man On, I deal head on with two men who come to their relationships from very different perspectives. Nicco Garza is a known bi-sexual, having been “outed” by his ex-wife in Spain when she catches him in a relationship with a man. He is forced out of his high level Spanish league and flees to American shores to form the basis of the inaugural Black Jacks team, pissed off and with something prove—not something that works out very well for him at first. His acting out only depresses him more. Until he lays eye on Parker Rollings, a young man, fresh from a college NCAA championship who is also escaping a proscribed life.
Parker’s parents expect him to leave soccer behind, attend the medical school he’s been accepted to, and to marry his college sweetheart. But when the temporary coach of the Black Jacks approaches him, after he’s been courted and had to reject teams at a much higher level that the lowly Detroit expansion team, he snaps. And makes a leap into a life that he wants, badly, that of pro soccer player. But one that he believes eliminates the possibility of admitting his own homosexuality to anyone, much less himself.
The two men dance around their attraction, end up leading the Black Jacks to a first season near undefeated season, then meet, accidentally at a resort in the off season. Their connection is intense, emotional, sexy and for Parker eye-opening. But it does not go easily from there. They are still in deep denial about what matters—soccer, or their love for each other.
It’s a novel not only of love between two men, but just as importantly, about the politics of gays in sports. And how clubs and teams must come to terms with how to “handle” the men and women who are their highly paid employees but who must be allowed to live their lives they way they want.
﻿
Excerpts from the first 3 books and in the series:
Man On (Black Jack Gentlemen: Book One) 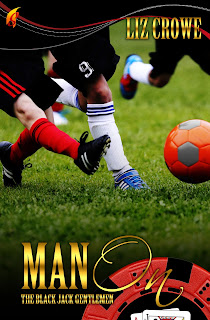 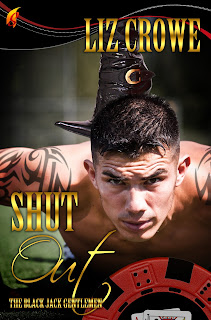