**Blog Tour** Save Me from Me by Erica Ashby

Dani refuses to lose another parent due to her absence from their life. After pulling herself back together following the death of her father, she moves back to her childhood town to live with her mom. She’s slowly pulled back into the lifestyle she worked so hard to get away from ten years ago. She accepts that this is the life she has always been destined to live. Getting a job at the store down the road and hooking back up with her first love Gage, seems to be the logical way to go…that is until Holden Reynolds shows up in town.

Now that Holden is finally back home from the Navy he plans on following in his father’s footsteps. Still trying to move on from the one woman who had his heart, he busies himself in work and returning to the country boy lifestyle he’s always loved. The best way to get over someone is to get under someone, right? That’s his mindset as he travels town to town with his job perfectly content with being a rambling man…that is until he meets Danielle Brooks.
When Dani isn't leaving and Holden isn't staying will they be able to keep themselves from getting too attached? Or will they be just what each other needs to cut all the strings that have them bound?
“You can’t save me from me, Holden.” –Dani
Book Trailer 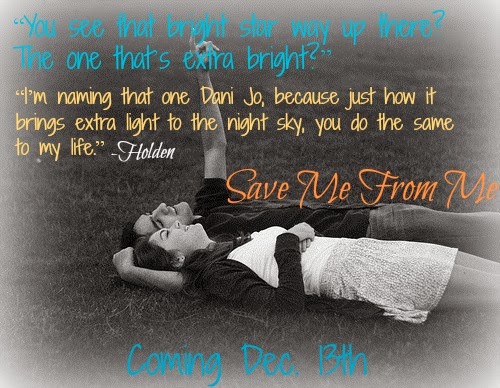 Being born an "Army Brat", Erika Ashby has been residing in Oklahoma the last 10 years finally putting an end to the nomad tendencies she had grown accustomed to. She's a happily married woman who has 5 kids between her and her husband. She has an insane passion for music and embraces her Inner Groupie any chance she has. It wasn't until the age of 29 that she realized she also had a hidden passion for reading; before then she claimed to have hated it. Six months after unlocking that deep desire she never knew she held, she turned the key to another chapter of her life which has become the desire to write. And the rest is still history in the making.

I loved Save Me from Me.  It’s a story full of heartbreak, love, sorrow and off the charts steamy sex.  I was hooked from the Prologue.

Dani always wanted more out of life.  She never wanted to end up like her mother or other females in her hometown. Right after high school she breaks up with her boyfriend and moves away to college.  She was away for ten years when her dad suddenly passed away and she moved back home. I absolutely loved Dani.  She is stubborn, headstrong, feisty and wants to save everyone and never puts herself first.

“It hurts me knowing the feelings he still has for me. Do I still care about him? Yes of course, but not to the extent he does.”

Gage never got over his breakup with Dani.  Ten years later he is still hoping they can rekindle their love when she moves back home.  Dani feels like its settling to be with Gage.  He is her best friend but he doesn’t light her on fire like she desires.  She hates the idea of settling and being tied down.

“His eyes seem so sincere and sweet, and I know without a doubt, that he could be one of the most amazing friends.”

Holden moves into town for a few months for a job.  He is every girls dream – sweet, sexy, and funny but with a broken heart.  He is working for his father’s business only because he feels he must. He hates disappointing his father.  Even though he has never shown him any love or compassion as an adult.

“His lips are on mine.  These sexy lips are making my whole body tingle.”

Holden and Dani have an instant connection.  Lets just say things are a bit awkward the first time they meet.  They can’t tear their eyes off each other even though he is with her #1 enemy.  They start off hanging out as friends and things quickly changed.  The dock has always been a very special place for Dani.  Holden loves it as much as Dani and it has become their special spot.  This is one very hot and steamy book.

Holden’s dad finds out about their budding relationship.  He doesn't want Holden to be held back by another girl.  He causes problems for the happy couple.  Dani has to decide if she wants to fight for Holden and all their passion or settle for Gage.  There are many twists and turns that keep you hooked.  Who will Dani choose in the end?

I was very happy with the ending.  I LOVED the epilogue.  What a perfect way to end the story.  This is my first Erika Ashby book but definitely won’t be my last.