Book One
Mine For Tonight currently FREE ON AMAZON
http://www.amazon.com/Mine-Tonight-Book-Billionaires-Obsession-ebook/dp/B009GKU2DU/ref=sr_1_1_ha?s=digital-text&ie=UTF8&qid=1402704095&sr=1-1&keywords=mine+for+tonight


Down on her luck, nursing student and full-time waitress Kara Foster gets a massive blow to her already desperate financial situation that will surely find her living on the streets. Needing nothing less than a miracle to save her, Kara gets rescue from an unknown, unlikely and overwhelming source. Billionaire Simon Hudson makes her an offer that is impossible to refuse, but terrifying to accept from a man that she's never met. Will the handsome, alpha billionaire really be a solution to her problems, or will he end up being a major complication and a danger to her emotional sanity?

Reclusive billionaire Simon Hudson would rather be behind a computer creating computer games than rubbing elbows with the elite and he knows exactly what he wants...until he meets Kara Foster. Something about Kara touches Simon in ways he's never experienced and definitely doesn't like. For over a year, Simon watches over Kara, but stubbornly refuses to admit his desire to possess her, not even to himself. But when she ends up in a situation that could very well be her destruction, Simon steps up to help her, not realizing that in saving Kara, he might very well be salvaging his own soul.

"Mine For Tonight" is book one of "The Billionaire's Obsession" . Books in this trilogy do not stand alone and need to be read in order. They include:

This is a steamy romance and is not intended for YA readers. It contains steamy love scenes, explicit language and adult emotion not appropriate for YA readers.

Sam and Maddie are here!

Billionaire Sam Hudson has pretty much lived his life with no apologies because he tries never to do anything that he’s sorry about…except for what he had done in the past to Dr. Madeline Reynolds. Many years and regrets later, Sam meets up with Maddie again by chance; his brother Simon is marrying Maddie’s best friend and the two of them are forced to be civil. But Sam wants to be more than polite, and he wants another chance to make things right, so he offers Maddie a bold proposition, an offer he knows she’ll have a very hard time declining even though she hates him.

Dr. Madeline Reynolds adores her best friend Kara and her fiancé Simon, but being forced into the company of Sam Hudson, because they are both in Simon and Kara’s wedding, is pure torture. She’s hated Sam for years, but when he offers her a bargain, something near and dear to her heart, she’s torn between her dislike for the man and the offer of something she’s always desperately wanted. Once, Sam Hudson nearly destroyed her, but Maddie discovers that sometimes things aren’t always what they appear to be. Is Sam really a devious heartbreaker, or is there something more to him beneath the surface?

Can two people with so many years of hurt between them learn to trust each other again?

He'd been reunited with a sister he hadn’t realized existed. Finally he had family again, a reprieve from the pain and loneliness that had haunted him since his devastating loss. Yeah…he was as happy as a man could be, considering he had lost the other half of his soul and most of his heart when fate had torn his wife away from him.

Or so he believed…until the day he rescued a mysterious woman in the park, a female who somehow had managed to reignite a part of him that he thought was long dead...
Suddenly, Max's protective, dominant, possessive male instincts flare to life, leaving him at a loss as to how lightning could possibly strike twice in one lifetime. Is he truly being given another chance at real happiness, or would it be dangled in front of him, only to be taken away once again?

With his professional football career over due to a tragic accident, billionaire Kade Harrison takes on the task of solving a mystery for his brother-in-law and friend, Max Hamilton. Without his former career to fill every minute of the day, Kade's looking for something to challenge him--now that he's lost the career that had meant everything to him. But what starts out as a simple favor soon becomes a whole lot more than he bargained for when the woman he's seeking slips away from him every time he gets close to finding her. When Kade does finally corner her, things start to get even more complicated. Asha Paritala is nothing like he expected, and the female he had tracked down as a favor for Max soon becomes a woman he wants for his very own, a woman who makes protective and highly predatory instincts he didn't know he had flare to life inside him. Kade soon discovers that he wants Asha's total surrender to the desire and passion that vibrates intensely between the two of them, but he also wants her trust, the one thing Asha's history makes it difficult for her to give. Can Kade convince her that some things are worth risking it all?

Caught between two worlds, Asha Paritala is homeless, broke and damaged from a life of abuse and neglect. Born of an American mother and an Indian immigrant father, Asha was raised as an Indian woman by a foster family after the death of her natural parents when she was little more than a baby. She's spent her entire life under the control of others until finally breaking free two years earlier, and she's determined to keep her freedom, even if it means she has to struggle to survive. But when she meets Kade Harrison, her resolve is tested. After Kade helps her through a bad situation, she finds herself beginning to trust Kade as she's never trusted a man before. Kade is everything she always thought a man should be, but can she lose herself in him completely when she knows she's damaged and confused. And is it really possible that she could be a lost sibling to two people like Max Hamilton and Maddie Hudson? Asha is tempted by the possibility of family, and the irresistible lure of a man like Kade Harrison. Can a woman caught between two cultures, so flawed and so backward, really reach out and take what she wants, or will the instinct to run from the pain of her past destroy the hope of happiness for her future?

This is a complete novel with no cliffhangers. 18+ due to sexual situations and graphic language.

After four years of working for “the billionaire boss from hell” Ally Caldwell thinks she finally has her life on the right track. Her fiancé is out of dental school, ready to go to work at a thriving practice, and it would finally be her turn to go back and finish her college degree. Unfortunately, her carefully planned future crumbles when she finds out that her fiancé, the man she’d nearly killed herself to help get through school, has been cheating on her. With her wedding looming in the near future, Ally’s blindsided, realizing she’d never even knew the man she’d been planning to marry. Suddenly, her carefully organized life is turned upside down, and not one single thing is turning out the way it was supposed to happen. Even her boss, Travis the Tyrant, is beginning to act differently, throwing Ally into an even more confused and chaotic state of mind. Travis, the one man who she’d always counted on to be a jerk, was now the guy who actually steps up to try and help her straighten her life out again. Unfortunately, she doesn’t much care for his highhanded arrogance or his methods of “helping.” Ally wants to hate Travis. It makes her life so much simpler to fight with him than to admit to the combustible chemistry growing between the two of them. But as she begins to see more and more of the real Travis beneath his dark façade, she can’t seem to resist the dangerous lure of their unlikely attraction.

Billionaire Travis Harrison does everything he possibly can to repair the Harrison name after a scandal nearly destroyed his family years ago. He makes sure he keeps himself and his actions in check, his emotions buried under a thick layer of ice. Only his secretary and assistant, Alison Caldwell, makes him come close to losing his carefully constructed image. The obstinate female keeps shoving him closer and closer to the edge of sanity every single day. But when he finds out about her fiancé’s betrayal, his protective instincts roar to life inside him, making him want to ensure she’s never hurt again. The only problem is…Ally doesn’t want his help, and the infuriating woman does everything she can to push him away, even as the two of them are swept into an undeniable passion that neither of them can possibly ignore. Before long, Travis finds himself in ruthless pursuit of something much more important and elusive than just a business deal.

Can these two very different, very stubborn people actually be meant to be together? Find out if Travis and Ally can let down their defenses and surrender to a love so powerful it will rock them to the depths of their souls in Billionaire Undone, Book Six of The Billionaire’s Obsession series. 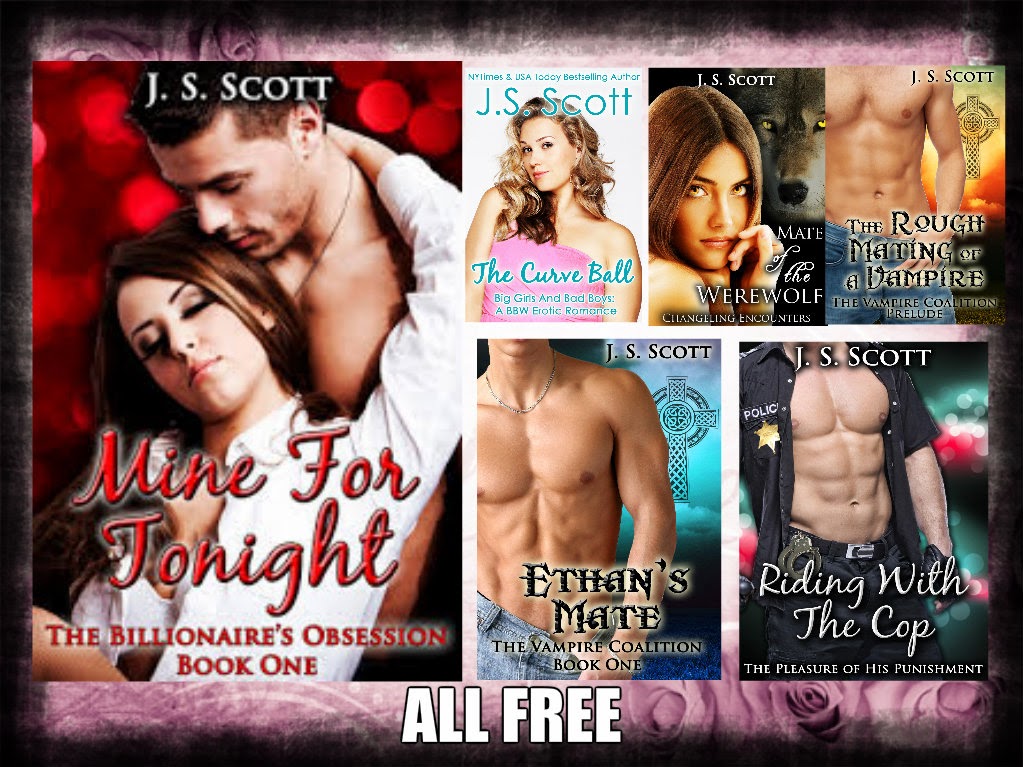 The Rough Mating Of A Vampire: Amazon: http://www.amazon.com/dp/B007YIZ2YA