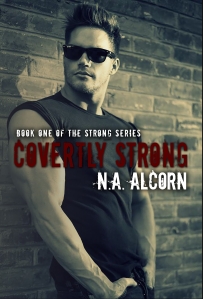 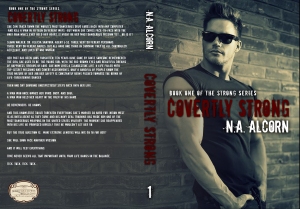 “True love is intangible, and once it’s found---once it’s felt inside the soul, possessing every single cell inside the body---the heart never wants to let go.”

OMG!!!!! ~SIGHS~
I LOVE THIS BOOK.
I LOVE NIX ~SIGHS~
...And I LOVE SLOAN.
I was intrigued when I got sent the synopsis to this book, but also knew that I would fall in love with it when I started reading. NA had me hooked from the very first page, and I became so immersed into it, that everything else got forgotten about.

‘Covertly Strong’ is told to us in multiple parts. These parts unfold the emotional story of Nixon West and Sloan Walker. The first part tells us how Sloan and Nix met, their relationship and how they fell in love. Their relationship is exactly the kind of young love you expect to see. The loved fiercely, spent every moment together and relished in the time they had. They made plans, adamant that they both could overcome anything that got in their way. But, as is life of a military child, you don’t always get what you want, and you can be shipped off at a moment’s notice.
“You will always have my heart, Meli, Always. I know we’re young, but fuck, I know with every inch of my soul that I will never love anyone else the way that I love you. This right here,” he continued on as he pointed to his chest. “This right here is yours. It will always be yours, and no one else will ever have this part of me...”
“And my heart is yours, Nixon West. No one will ever have this piece of me.”

Part 2, takes us on the journey of Nixon and Sloan in the present day, 10 years later. They’re living, but not really ‘living’. They both throw themselves in to their respective careers, but are both lonely in every other aspect. One chance meeting at a charity dinner party, throws both their worlds and minds off kilter. When they come face to face you can feel the tension thickening at every minute. The air around them was thick with it....and not just sexual.
It’s been 10 years since they seen each other. So much has happened. They’ve changed and each has their fair share of secrets, but since reconnecting things seems brighter and everything feels right.

“Put your money where your mouth is, Lieutenant, and prove it. Scream it. Tell the fucking world,”
“His lips brush her ear as he whispers, “I love you, Sloan. I love you with every ounce of my soul.”
She looks up into his sapphire orbs with curiosity and surprise. “Why’d you whisper it to me?”
“Nix stares down at her, locking his gaze with her beautiful eyes. “Because you are my world, Meli...” He pauses as he inhales a shaky breath. “You. Are. My. World.”   ~Sighs~

Part three, is where all hell breaks loose and their jobs collide in epic proportions which leaves us in utter chaos and full blown anxiety mode.

“His reality has now morphed into his worst nightmare.”

This really is such a phenomenal book.
Sloan has got to be one of the strongest lead females I have come across. She’s fierce, strong, and loyal and is very passionate about her job. She takes it very seriously and even when Nix comes back in to her life, is determined to keep it that way. But she’s also one of the most loveable people there is. She loves Nix with every bit of her soul and isn’t afraid to show it...or the other ‘frog hogs’, and by god does she give it to them. Hahahahaha!!!!!

I felt myself waiting with bated breath to know what would happen. How they would react after being reunited and what would happen next, especially with all the time that had past, and the lives they now lead.
The writing was flawless. The characters are amazing and loveable.
The attention to detail and research has been done with such precision and thought, that it is easy to understand military terms and what it going on without being overwhelmed by it.
I love Military novels and find that I can relate to the characters more. Coming from a Military background myself, I sympathise with what they go through and the emotions they feel.
NA Alcorn has really done a marvellous job with ‘Covertly Strong’ and I very much look forward to the future books in this series.
If you love smoking hot, Alpha males...in the form of a Navy Seal and an equally as strong, independent and powerful female lead, then you will absolutely love this novel. I cannot recommend it enough and you will not be disappointed. 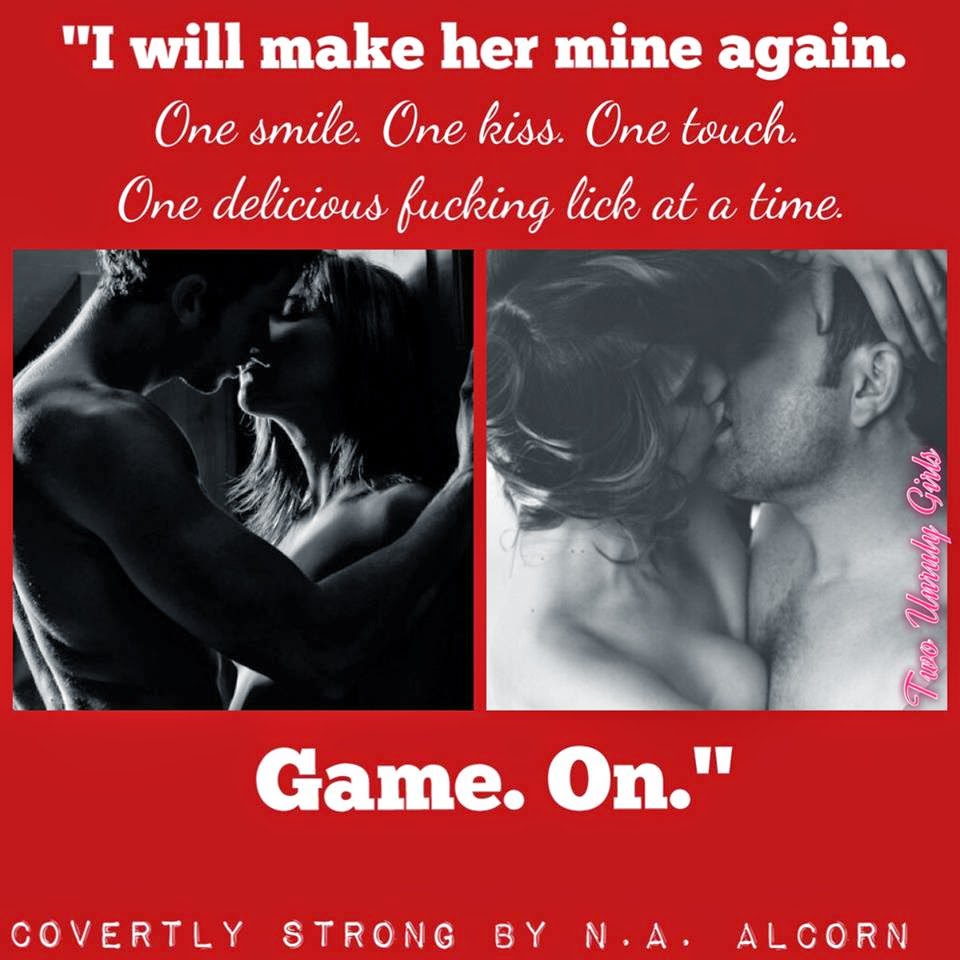 Holy Mother of all things Faaaaackkkkkk, this book is about as close to causing a train wreck in my heart as the Thoughtless Series was, and for anyone who knows my total adoration for that series I do not say it lightly.

Blake & Casey I believe will be ever etched in the hearts of anyone who picks up this book, you will be both gutted and delighted that you invested your time in them.
This book is filled and I mean overflowing with bad choices, but for some reason we don’t hate either of them for it, I like many of the Mo Stash ladies currently undergoing therapy after reading Bait, are able to compartmentalise the cheating in to almost two very separate parts of Blake’s life.
I can almost hear some of you saying, No, that is not ok, cheating is cheating.  Well ok, go and read it and then come back and tell me if you feel the same way.  This is not Kiera and Kellan, this is Blake and Casey and it is so very different.

There is good Blake, the people pleaser, who is pottering along in life doing what she thinks girls are expected to do, find a decent chap (he is), get married etc etc, it may not be setting her world on fire but its – well Nice!

There is risqué Blake who throws caution to the wind on a visit to see her best friend and gives herself to the brooding hot as hell guy she meets in a bar.  A one night stand?  Well that was the original plan.  But let’s face it she met Casey and a one night was never going to be enough.
Casey, arhhh, yes, Casey, brooding, hot as hell, sensitive, insensitive, typical bloke, not so typical bloke, the contradictions kept coming, but one thing is for sure, he loved Blake and by the time she was prepared to admit that to herself too, it was too late.

Now don’t get me wrong, there are plenty of laugh out loud moments, cute texts, hot red jeans (you’ll understand), Betty and Lou had me in stitches a lot, it helps get you through, I promise.

"Honestly, I don't really care what you call it. I want you. Text. Call. In the flesh. I can't tell you what you think you want to hear. So I won't, but I'll tell you everything else. Everything I know you want to hear. How badly I want you. Now. Up against this wall.....and we'll sort our friendship out in the bathroom in twenty minutes. Because right now I want inside of you. It's been a long day." Casey

Brace yourself for the sex! Do not read this on the train, bus, sunbed by the pool, the squirming will be obvious to your fellow travellers and pool dwellers.

I will not spoil this for you, but safe to say the scene that completely and totally shattered my heart was, devastating, and you will know when you get there.
The ending was painful to read, not shattering, but the ache it left behind lasted for days, it was over too soon, but there was hope, wasn’t there?
People have been posting teasers and quotes from this book all over Facebook and I can honestly say that my stomach drops as some of them bring back the god awful feeling of devastation, confusion and desolation I felt when I read them the first time round and not many books remain inside us like that. I can count mine on one hand.


Now on to Ms Mabie, where in the name of the ever loving rip your heart out and use it as bait, did she pull this story from?  This is only her second published novel and it has created more debate than I have seen in a long time about a book.  Congratulations lovely lady and thank you for bringing me on this journey with you. 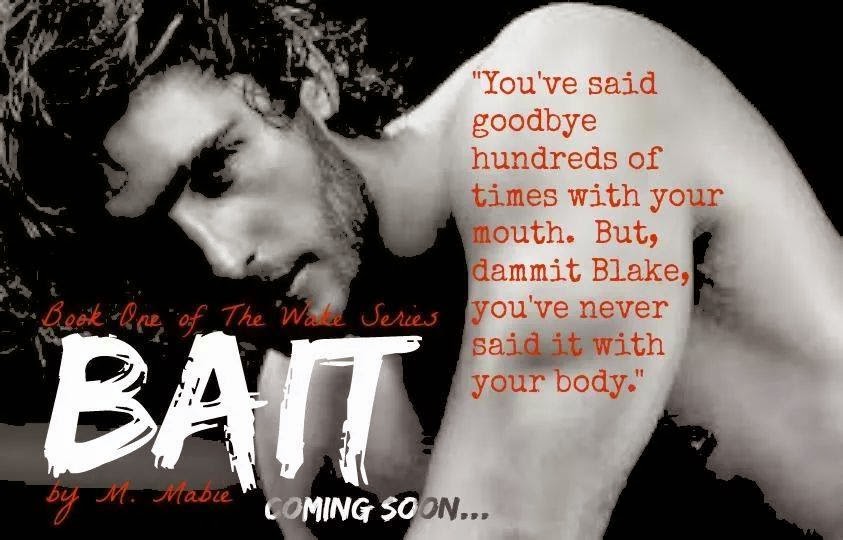