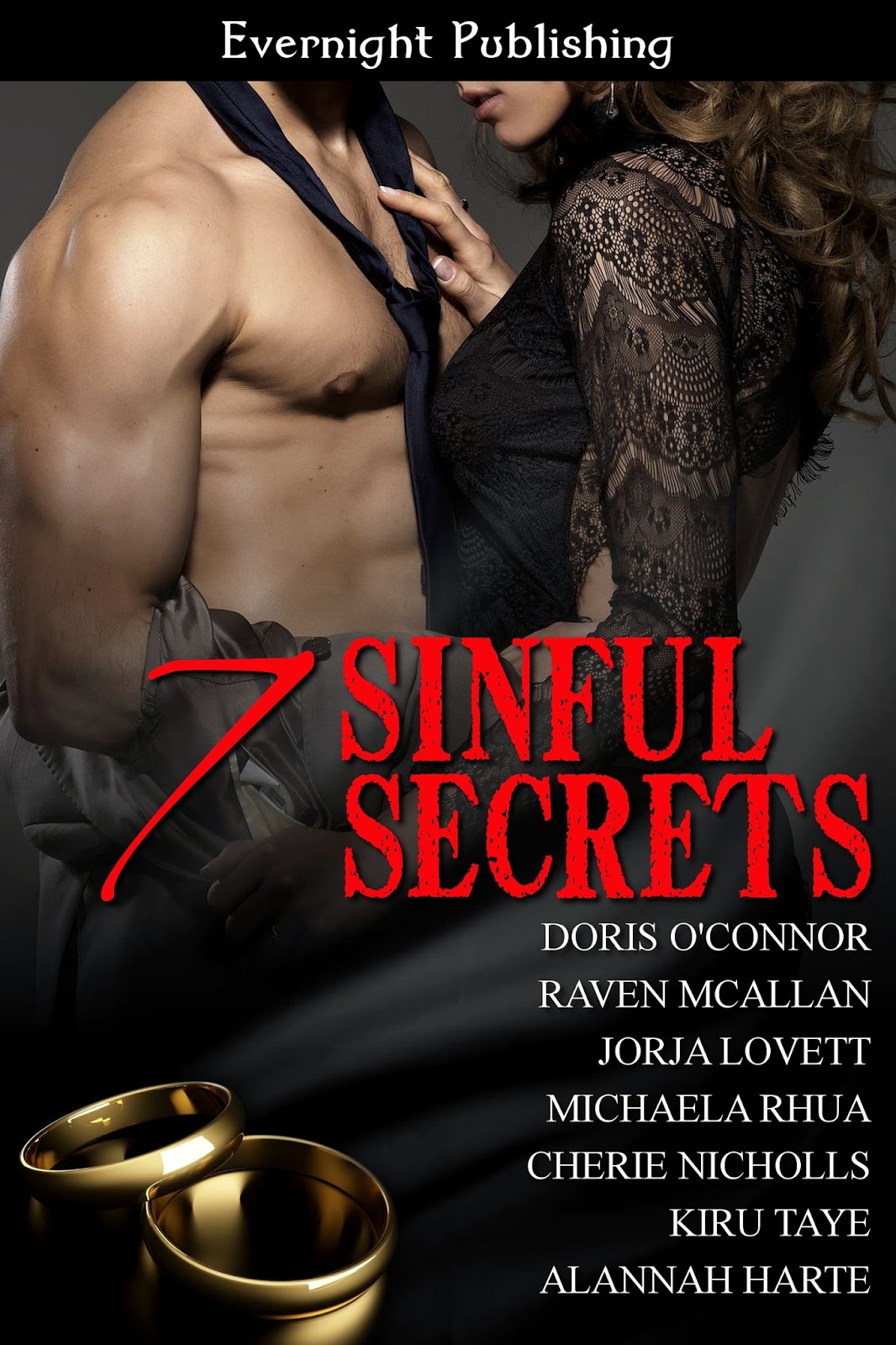 OVERALL BLURB:
Seven marriages—seven sinful secrets.
Marriages shouldn't have secrets, should they? Follow our seven couples, as they come to
terms with the fact that their partner has been holding something back from
them. Will it make or break their relationship? Read on to find out, and have
your fan at the ready, because these secrets are hot!

THE KNICKERS by +Doris O'connor
Discovering frilly French Knickers in your husband's dry cleaning can only mean one thing, right?
They're certainly not Mareijke's! Devastated at this find, she returns home early and walks in on the unmistakable sounds of Stefano in the throes of passion… but things are not what they seem…

BEHIND THE MASK by +Raven McAllan
When Daisy went on holiday she did not expect to return with a drop dead gorgeous husband. Life is great until she meets a masked stripper at her belated hen night. She knows the eyes behind that mask, doesn't she?

DOMINATION DREAMS by +Michaela Rhua
Nicholas Cole has been married to Marissa for twenty years, and he dreams of being dominated by his vanilla wife. When he returns from a business trip, he is in for one heck
of a birthday surprise.

ANNIVERSARY GIFT by +cherie nicholls
Cleo knows her wife is up to something, and she is determined to find out what it is. When she walks in on Marie and some bloke at a hotel room, she thinks all is lost. And then Marie orders her to stay… And when your Domme gives you an order…

SEX TAPE by +Kiru Taye, Author
Juan Roberto's unexpected arrival home turns on its head when he discovers his wife Noni has a mind-blowing surprise she's been hiding from him. Discovering secrets and sex tapes have never been hotter or more pleasurable…
Contains: a naughty video and an even naughtier married couple rediscovering each other.

Harrington loves his new wife Penny. So much so that he puts his own desires for a more exciting sex life to one side. Their lovemaking may be vanilla, but it's all he needs, or so he thinks, until the suitcase breaks and he discovers her secret. 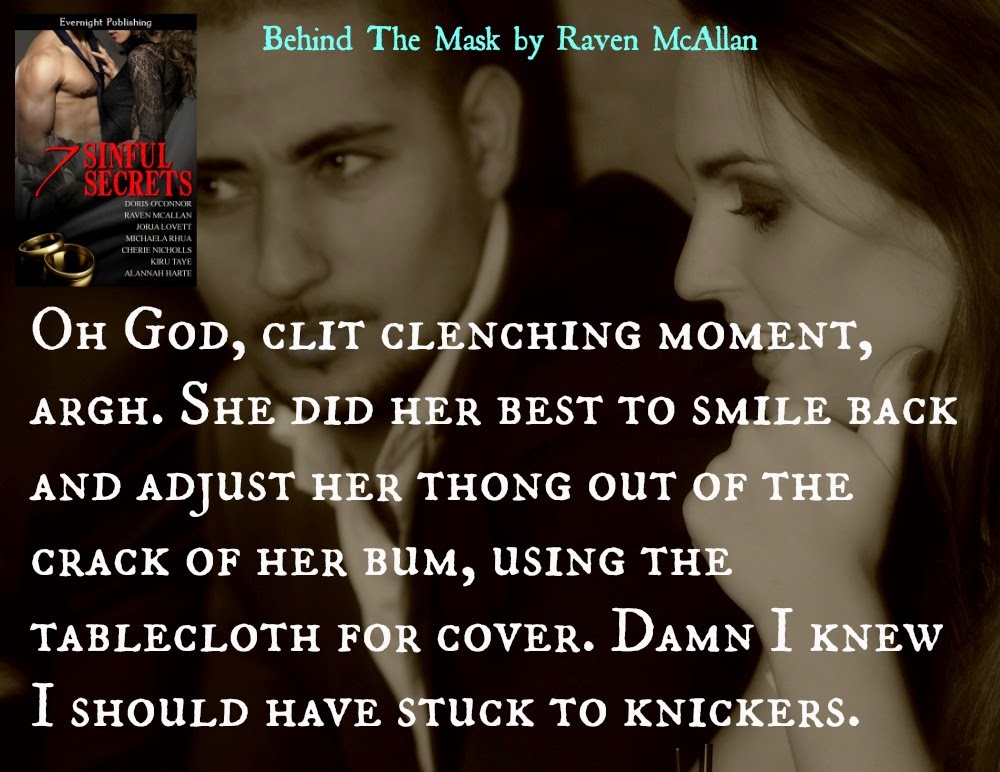 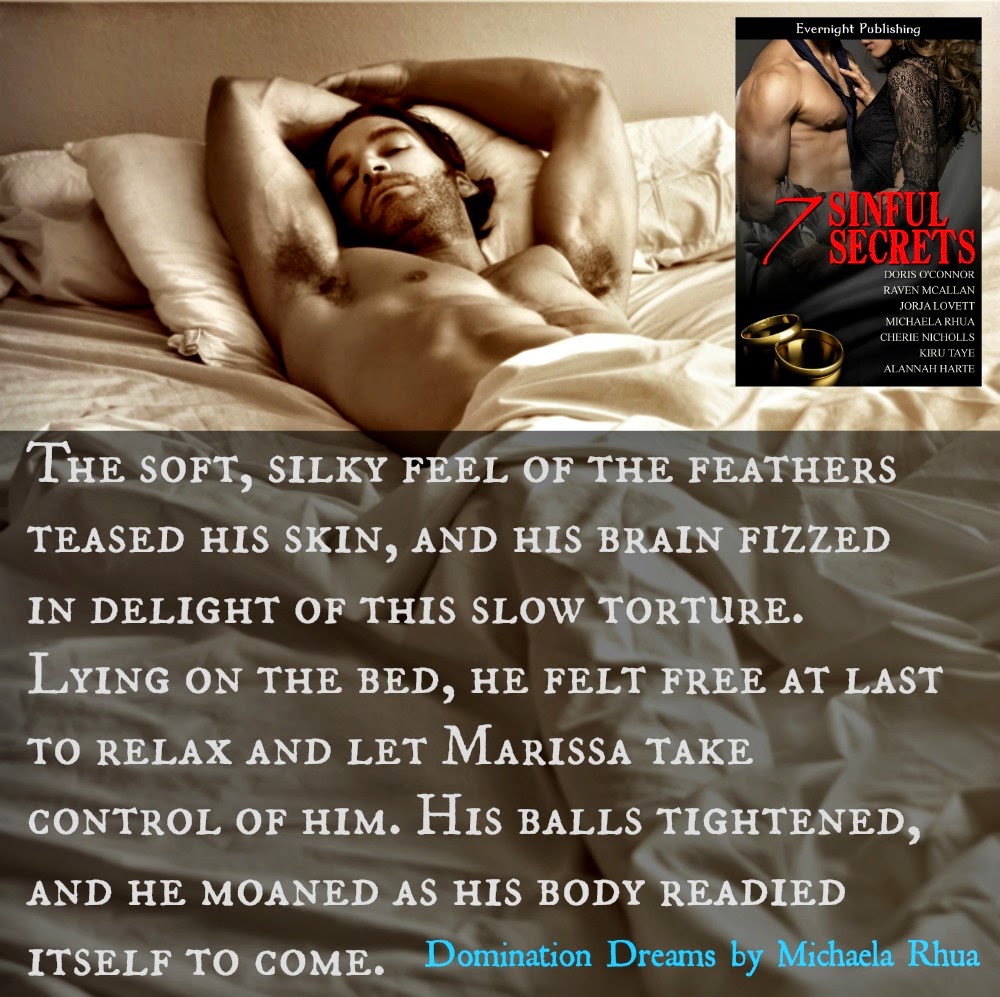 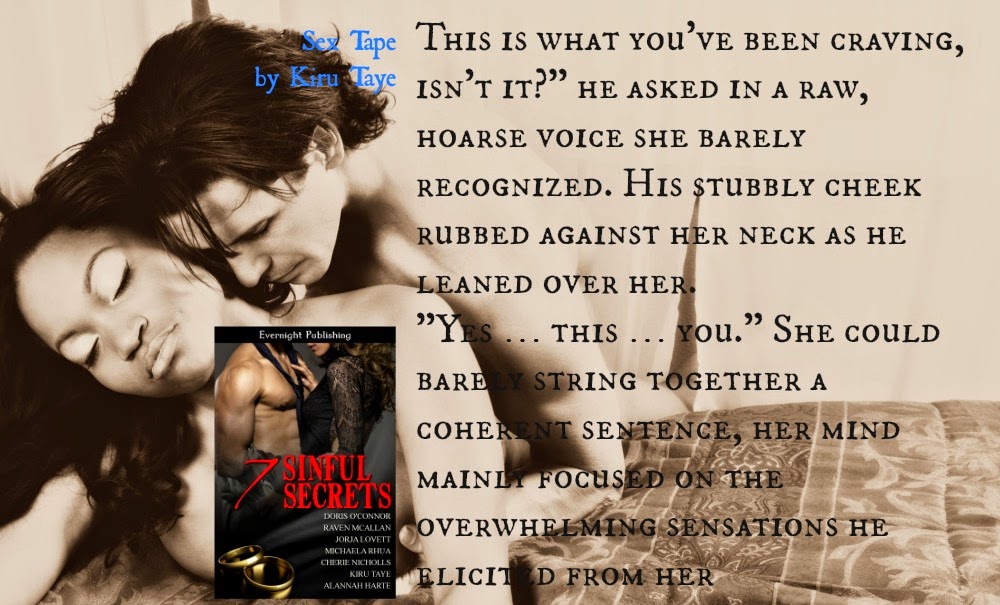 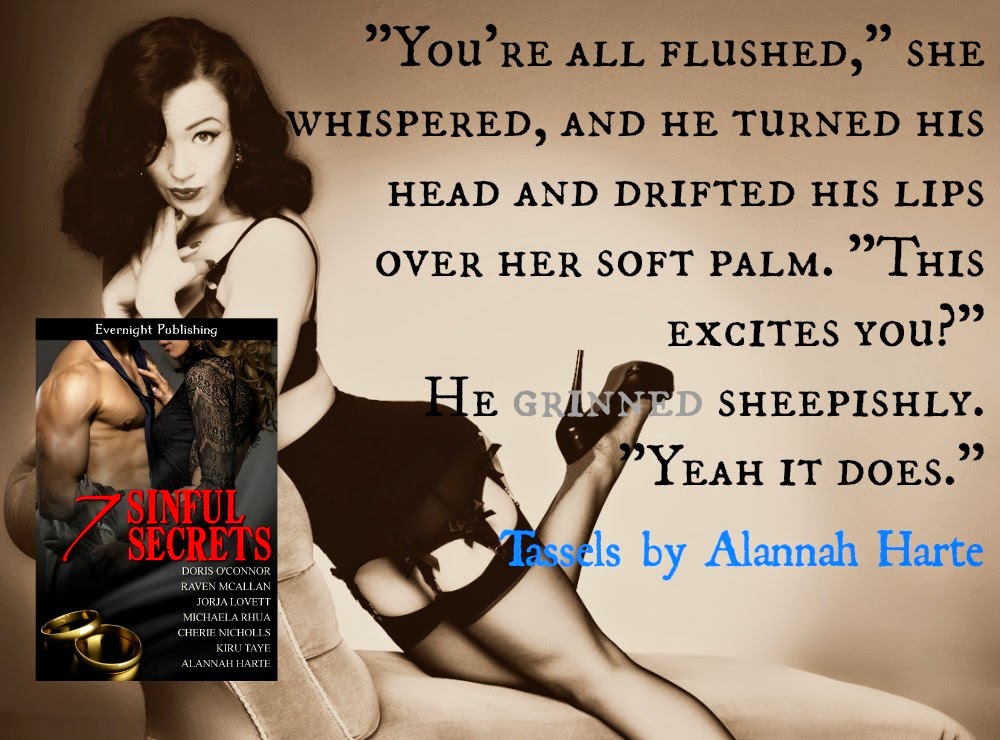 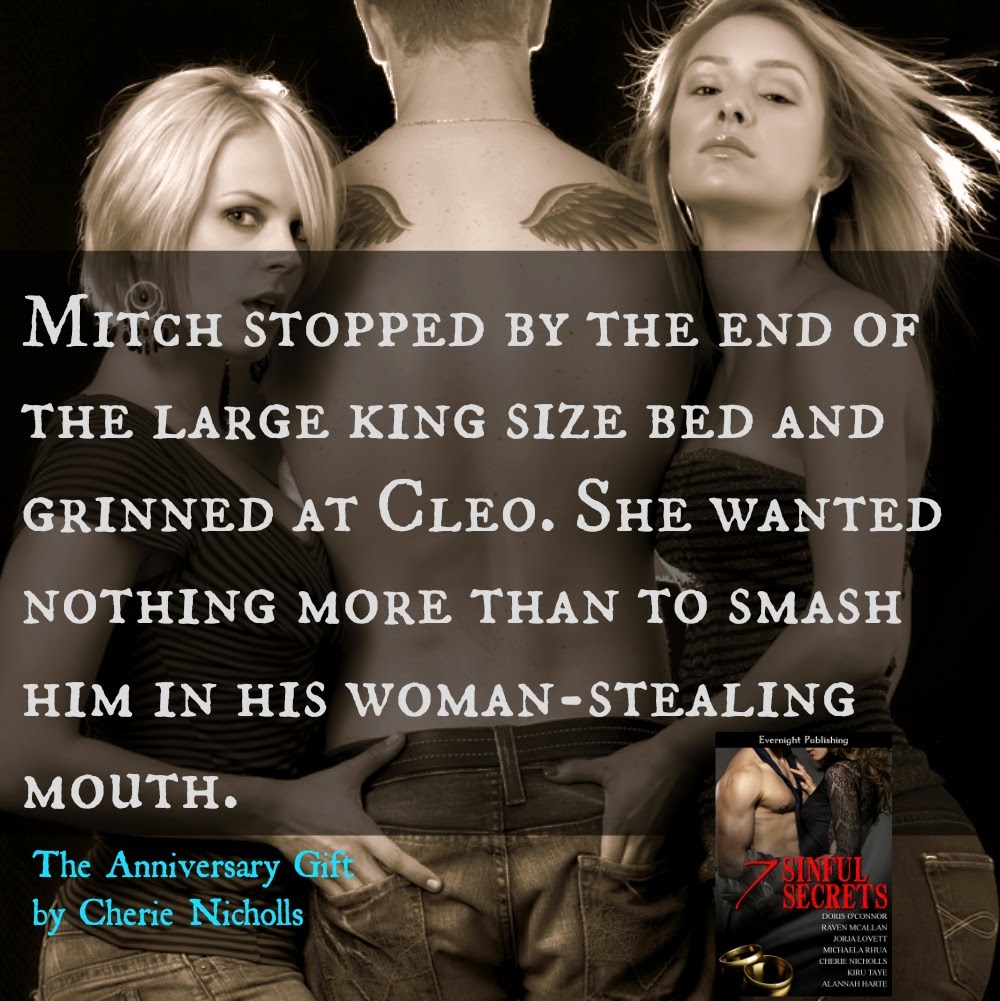 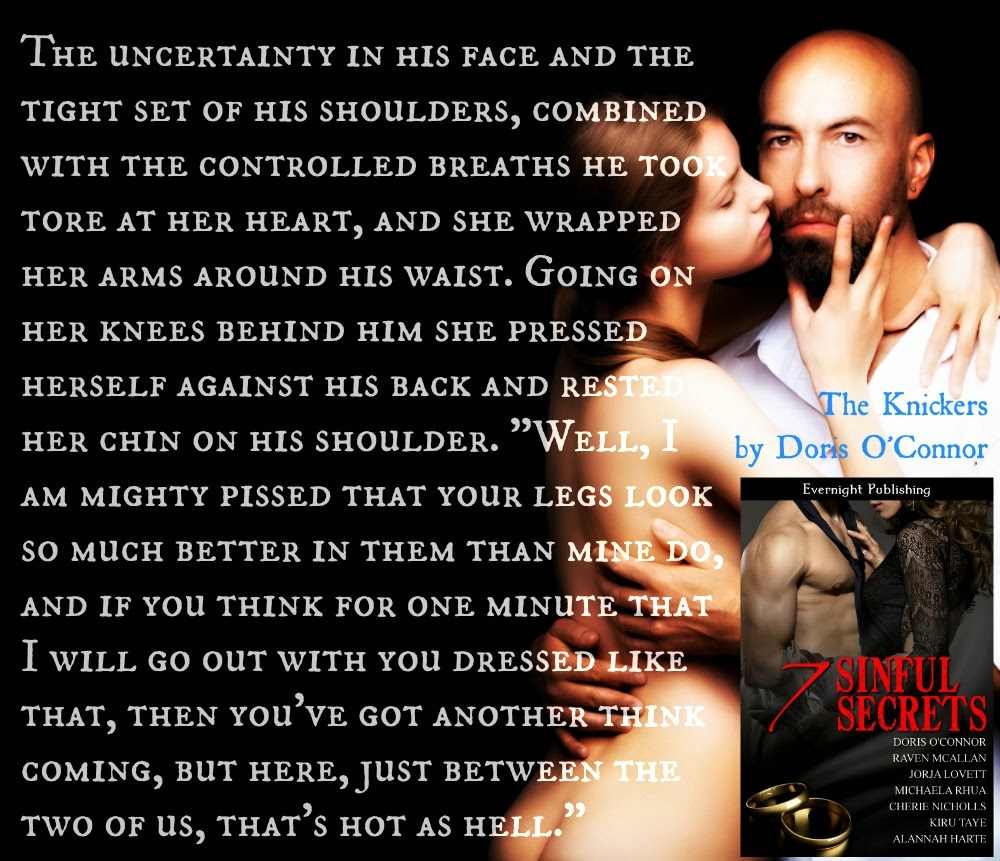 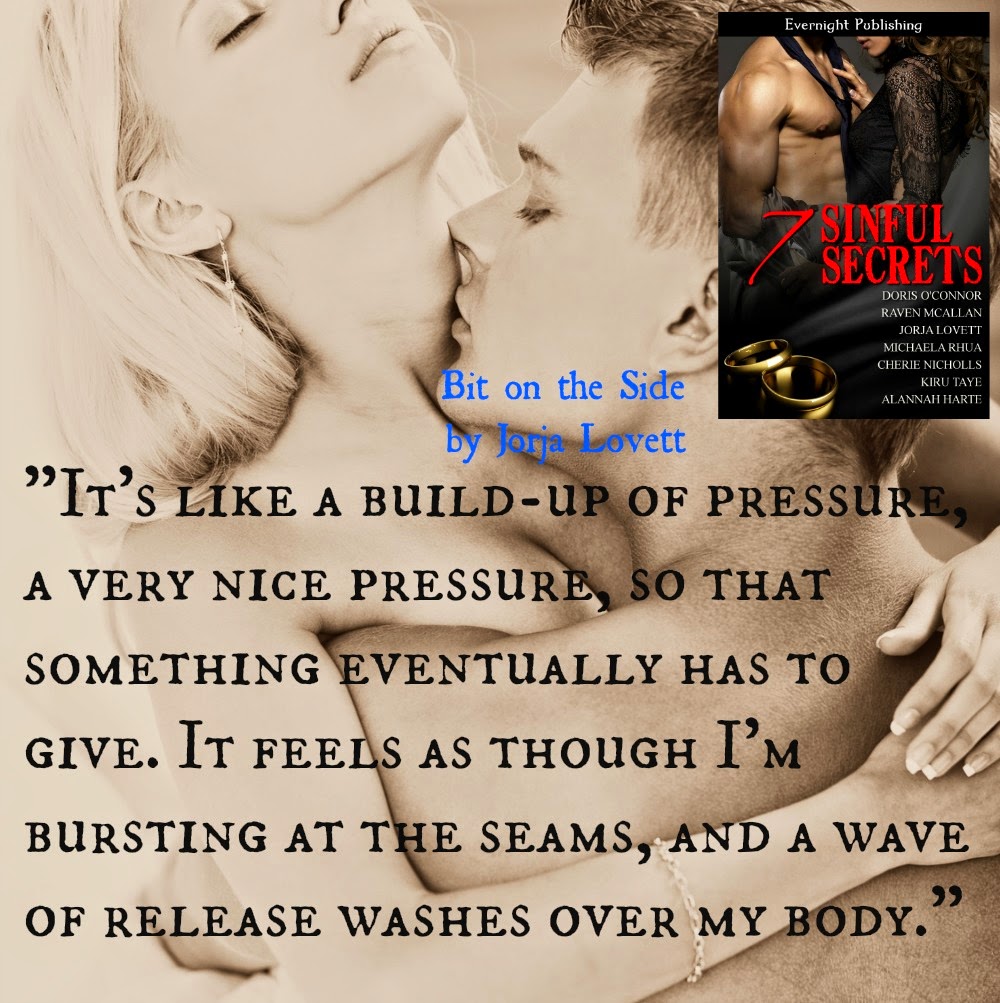 Excerpt from The Knickers by Doris O'Connor

He had to be hearing things. She could not mean what she had just said. However the short bursts of her warm breath against his neck and the hardness of her nipples against his arm confirmed the truth behind those words, as clearly as the musk of her arousal. There was no doubt in his mind that she would be wet for him. Her body gave her away, as surely as his own responded to her. The dominant in him rose to the fore, and he halted the upwards progress of her hand with a growled, "No."

She froze, and he fisted his hand in her hair, pulling her head backward to enable him to study her face. Stefano lost himself in the tender and hopeful expression mirrored in her beloved features, and he kissed the tears still clinging to her eyelashes away.

Mareijke sighed in submission, and he smiled into the kiss he slanted across her lips. How he had missed her, the simple act of kissing, tentative strokes of her tongue matching his forceful ones, as he took the kiss deeper, angling their bodies until she was lying underneath him on the bed. He yanked the cushion still between them away with an annoyed growl and thrust his frill covered cock into her groin.

She gasped into his mouth and clung onto his shoulders. Arching her hips to meet him thrust for eager thrust, she locked her ankles behind his ass, and Stefano grunted his approval. This is what he needed, this reassurance that she still wanted him as much as ever, and suddenly he couldn't wait anymore. He wanted her bound and naked, the silky walls of her tight pussy milking his cock, as he fucked her hard and fast.

He broke the kiss with a bite to her lower lip that made her squirm, and he cupped her mound. The damp fabric made him smile almost as much as her hiss of pleasure when he pressed against her clit. A shudder went through her, and her eyes went wide when he straddled her legs.

"Grip the headboard for me, and don't let go."

She complied immediately, and he grabbed the ends of her sensible blouse and yanked hard. Buttons popped and fabric ripped as he pulled the thing clean off her, and his breath stalled in his lungs at the vision in front of him. His wife's ample breasts were barely concealed by the scraps of red lacy scaffolding covering the heavy mounds, and he ran his knuckles across the hard nubs clearly visible through the see-through fabric. They firmed even more, and she arched into his touch. Her little teeth made imprints on her bottom lip, swollen from his kisses, and her whole body shook in need when he ran a finger under her bra cup. He pulled it down freeing that breast to his gaze and with a grin at her bent down and sucked the rosy tip of her nipple into his mouth.

"Stefano … please…" Her lust-filled moan shot straight to his cock, and he suckled harder, kneading the other nipple between his fingers. He knew how responsive she was to this kind of stimulation, and helplessly trapped as she was under his legs, he could feel the rising tension of her body, her desperate need to come. Breath coming in short gasps, her auburn hair feathered across the pillow, she held onto the headboard with a white knuckled grip, as her body clambered towards release. She screamed her annoyance when he released her nipple and bit down hard, causing her to pant harder.

With an audible rip the delicate lace of her bra gave way under his ministrations and her bountiful curves spilled into his waiting hands. Stefano pushed them together and blew across her distended nipples. Mareijke squirmed underneath him. A fierce blush spread across her sweat-slicked skin, and her head rolled form side and side. He drank in the sight of his wife lost to her arousal, and a sense of calm settled over him, like it always did, when he gave her pleasure. Even without the discussion that they would have to have soon, he knew that all would be all right between them. Stefano lifted himself off her and pulled her pants off, taking her lacy thong with them. The musk of her arousal drew him, and he left the trousers dangling just under her knees. Pushing her knees up, he angled her lower body until she was half lying on her side. With her hands still clutching the headboard and her legs trapped inside her trousers she had nowhere to go, and he ran his hands down the curve of her hip and kneaded her ass cheeks. She pushed into his hand with a small moan, and he brought his hand down on one shapely ass cheek.

"Yesssss, again … Please, Stefano … I need." The rest of whatever she was going to say was lost in the sound of his hand connecting with her milky flesh, and his cock threatened to split its lacy covering, seeing the red marks of his possession. Hearing Mareijke's needy sighs in his ears he couldn't wait one minute longer. The sheets of the bed were stained with her arousal, and without further ado he freed his throbbing dick and aligned himself with her wet entrance.

"I'm going to fuck you now, cara. Is that what you want?" He growled his question into her shoulder and bit her ear, soothing the sting with his tongue.


********
Excerpt from The Anniversary Gift by Cherie Nicholls

“What’s so amusing?”
“She said you’d come.”
“Did she? Well you can let her know I’m here.”
“Come on
in.”
Cleo stepped in to the room. He didn’t leave her much room, and forced her to brush against his body.
“Who was at the door, Mitch?” Marie asked walking out of the bedroom in nothing but black lingerie. The very same set Cleo had bought for her birthday.
“Your woman has arrived.”
Cleo expected shock, perhaps guilt. She saw none of that in Marie. A smile spread across Marie’s face. Cleo’s temper started to rise. Marie wasn’t even sorry that she’d been caught.
“Mitch, as in Mitchell, your new PA? Little cliché don’t you think,
Marie?”
“Perhaps, but it works for me. He works for me, too, in more
ways than one.”


“I don’t need to hear about your exploits, thank you.”
“No? But
I thought you liked when I talked dirty, baby?” Cleo’s
cheeks burned. How dare she?
How dare Marie try
flirting with her when she’d been caught
cheating?
“Yeah, well that was before you decided I wasn’t enough
to keep you entertained.”
“Is that right?” Marie sat on an overstuffed chair, a hand casually stroking the swell of her breast.
Damn her, as angry and hurt as Cleo was, she still wanted
Marie.
“Yes,” Cleo said.
“Mitch, get the door,” Marie said.
She was going to have Cleo thrown out? Fine. If that’s the way this was going to end, then fine. She’d walk out with her head held high even if her heart was in shatters.
The sound of the lock snapping into place drew Cleo’s attention.
“Good
boy,” Marie said with such praise for the man Cleo wanted to
head-butt him.
Mitch locked the door.
What the hell?
Cleo watched him cautiously as Mitch walked around in front of
her.

“Now, Mitch, show my woman why you’re here with me.”