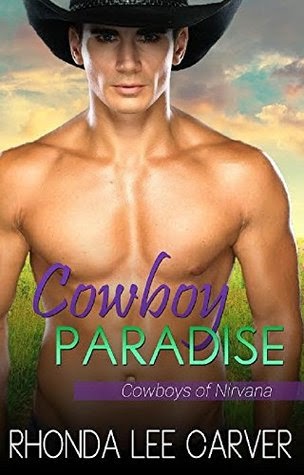 Exhausted with carrying around the weight of a damaged past, Cara is ready to take the ultimate step in finding her old self, before she met and married her evil husband. She needs to get away from the small town where rumors are spinning and people know her. When she visits Nirvana Ranch, an R&R, she realizes life isn't as bleak as she thought.

Ben is missing something. He doesn’t feel the excitement he once did as a ranch hand at Nirvana, until he meets a guest that turns his world upside down. He has a connection with her that he can't brush off or deny. Getting to know her breaks every rule in his book, but he is willing to take the risk.

Cara didn’t expect her life to change the moment sexy and rugged Ben walks in. Parts of her are flaming hot for cowboy, and she has an opportunity to break the rules, something her husband never allowed. Ben triggers her every fantasy and every desire. She’s on the ride of her life and it doesn’t require a saddle.

What started as a strong urge to take Cara to a new level of passion becomes much, much more for Ben. Cara’s touch destroys the boundaries he’d built—exposing a secret of his own, a past of heartache and guilt.

Warning: Read at your own risk of falling for a cowboy.

“Ben, something’s in my pants.”
He dropped the basket to the ground. “What is it?”
“I don’t know, but…ouch! It stung me!” She froze. “Afraid if she moved an inch either direction whatever it was would sting her again. “I think it’s a bee.”
“What does the sting feel like?”
“Are you serious? A sting! Like someone shot a staple into my butt.” Tears came to her eyes.
“Drop your pants, Cara.” He was beside her in a flash.
The back of her thigh started to throb in pain but she continued to stare at him in confusion. “I’m not dropping my pants.” She was mortified.
“If it’s a wasp, it’ll sting you again,” he warned.
Fear washed over her, but not from the wasp. If she pulled down her pants he would see her panties, not the pretty, lace ones she wore once upon a time. Not the panties she knew men like Ben wanted to see on a woman. Cara’s panties certainly wouldn’t be found in a sexy lingerie shop. These were the comfy panties—as she liked to call them—she started wearing when James continually told her how fat she was getting. They didn’t cover up enough for her liking.
Had she gone mad?
And why did she care one hoot what underwear she was wearing? If Ben didn’t like them, then so what!
She smiled. Wow! She was getting the aggressive thing down. Deirdre would be proud.
“Do you need some help?” he asked.
She smacked his hand away. “No. I’ll do it, but you have to turn your head.”
“Cara, we don’t have time for this. Is it not processing that you could be stung again? This is for emergency reasons only.” The sincerity in his expression made it easier to do what she knew must be done.
Unbuttoning and unzipping her jeans, he was polite enough to keep his gaze on her face as she slowly slid the denim down her hips and thighs, slipping them to her knees. All of James’s cruel and degrading verbal assaults crawled through her mind as she stood there, partially naked. He had been the only man who’d seen her without clothes. And he’d never liked what he saw.
“Where did it sting you, sweetheart?” His gentle voice soothed her—a little.
“On my thigh, the back.”
“Turn and let me take a look.” His gaze slipped past her chest, her stomach and she crossed her, vulnerability easing through her.  “If it’s a bee sting you could still have the stinger in your skin, which could cause infection. We can’t let that happen. You’re in Nirvana and that bee just wanted a little taste of honey.”
How did he do that? How did he make everything seem okay? How did he make her concerns seem ridiculous? In actuality, her fears were silly. She was being silly. James was gone and she was moving on. The internal scars were fading.
Reluctantly, she turned and closed her eyes. His breath rushed from his lungs and she jerked. Then he was quiet for the longest time. Was he silently gawking at her large butt or her huge thighs? She’d never claimed to be a supermodel and never wanted to be.  She read in a magazine that men liked juicy butts, but what exactly did ‘juicy’ mean? Seconds turned into a minute. She started to turn back but he stopped her with a hand on her waist.  “What is it, Ben?”
“It’s definitely a bee sting, darlin’.” His voice was smooth as silk.
“Then get it out fast. This is awkward standing here with my pants down around my ankles.”
“Well, sweetheart, there’s a problem.”

‘Cowboy Paradise’ is a sweet, short read of one woman’s journey to find herself after having lived a life of abuse from her late husband who’d “hypnotised her with his degrading insults and his physical abuse”. Three years after his death Cara is still a shell of the woman she once was and after some advice from her therapist books herself a 2 week break to the serene and tranquil setting at Nirvana Ranch.
She went there to find herself, what she didn’t expect was to find a man who elicited feelings within her that she had never felt before.
Ben has been a ranch hand at Nirvana after packing up and leaving his hometown four years ago.  He is there to cater to the guests every need from taking them to and from appointments, teaching them to fish and being a shoulder to cry on.  The only thing they aren’t supposed to do is become romantically involved with them, which hadn’t been a problem for Ben...until now.
“There had been beautiful lodgers before, no doubt. Woman who’d thrown themselves uninhibitedly at him and he hadn’t felt any emotion scratching the surface, except for the itch in his jeans. But Cara batted her eyes and he was on all fours, wagging his tail and waiting for a bone.”

Ben helps Cara to see that she is not the woman her ex husband portrayed her to be, that in fact she is a strong and beautiful woman who deserves to be loved and cherished. But, can they both help each other come to terms with their pasts and move on? Will they achieve the HEA they both desire?
“You want a man who is willing to give up his life for you, don’t you sweetheart?” His words came out in pants.
“Yes. I want love. I want to know what true love is.” Her throat ached in emotion.
“Let me love you, sweet, sweet Cara. Let me show you how desirable and precious you are.”

I really enjoyed reading ‘Cowboy Paradise’ once I started getting in to it.  I felt the characters really came across as real people. They were two broken people who found healing in each other. They didn’t hold all the answers but they tried and that’s all they could do.
This is the first book I have read by Rhonda but it won’t be my last. I am looking forward to reading the next books in the series, and hope we do get more of Cara and Ben.
If you are looking for a short but sweet read of healing, moving on and finding your soulmate, then I highly recommend you check out ‘Cowboy Paradise’.