**Blog Tour** Wild With You by Sara Jane Stone

One night with a hero is just what she needs. But more spells trouble . . .

Dr. Katherine “Kat” Arnold left Oregon and never looked back at the town that failed her as a child. But when a new patient from Independence Falls joins her clinical trail, she returns determined forward to show everyone in her hometown how she has thrived—including her high school crush.

Brody Summers saves people. For years, he looked out for his younger siblings and ran the family business. Now, he works search and rescue. After a failed mission, Brody plans to take a night off. When a blonde city-girl knocks him off his feet, he refuses to walk away from desire. But it doesn’t take long for Brody to realize the past is returning to haunt him—and it goes back further than one wild night.

The last thing Kat wants is a reason to extend her stay in Independence Falls. But she can’t escape the memory of Brody’s wicked touch. As their passion heats up, Brody wonders if he’s falling for the one woman who doesn’t need rescuing.

I wasn’t aware that this was part of a series called Independence Fall when I signed up to review this book.  Wild With You can clearly be read as a standalone, but since I fell in love with the characters and the fact that I love series that are set up such as this, where each character has their own book, I will be looking for the rest of this series soon.

Brody could easily be the man of my dreams.  He is sexy, handsome and protective.  He has taken on the role of being caregiver for his siblings but his dedication to others goes much farther.  He is also part of a search and rescue team that saves people who have gotten lost or hurt in the wilderness.  With his brother Josh who is suffering from a brain injury and has lost his short term memory, Brody searches for treatment options that will help Josh regain a normal way to function.  Brody will be picking up the doctor who has accepted Josh as a patient for a trial therapy, little did Brody know this was going to be one pick up he would never forget.
Dr. Kat Arnold had been raised in Independence Fall as a foster child.  She was ignored as if she had a disease, her possessions would fit in a bag and wasn’t worth the price of a fast food meal and she was lonely.  Her one bright spot of the day was seeing Brody.  He always showed her kindness and compassion, even when it came to fixing her “lucky” pair of shoes with glue.  Coming back to her past wasn’t something she had planned, but here she is with a handbag that cost more than her could have even dreamed existed as a child.  She is replacing the doctor that was supposed come as a favor and the first person she sees once she arrives is Brody, the longtime crush that made everything better.

The author created some very hot and steamy scenes that will leave you panting and begging for more, but she also shows you what love really looks like.  Brody is going to have to make a choice of his brother’s future or his heart’s desire for Kat.  Having the woman you love treat your brother’s brain injury as his doctor could get messy.  Kat will be faced with the realization of all the confidence she has gained from her PhD and career as a doctor may not survive going back home to the people who felt you were nothing your whole life. The insecurities that stayed with her through childhood will make a raging comeback if she isn’t careful.  She will also be torn between her oath as a doctor and her passion for Brody.

This was a very well written book that read smoothly and quickly.  I found when I had finished the time had just slipped away because I was so drawn into the story.  I will certainly be getting the rest of this series and putting Sara Jane Stone on my list of authors to watch for.

Additional books in this series

Book One: Caught in the Act

Falling for his rivals' little sister could cost him everything …

For Liam Trulane, failure is not an option. He is determined to win a place in Katie Summers' life before she leaves Independence Falls for good. But first, he needs to make amends for the last time they got down and dirty.

His professional success hinges on striking a deal to buy Katie's family business. And after Liam's relationship with their Katie went south years ago, the Summers brothers are more enemy than friend. If both parties agree to set the past aside, they can reach an understanding. But when Katie welcomes him back into her bed, Liam risks everything to make her his.

After Liam betrayed her trust, Katie Summers will do anything to keep him from walking away with the family business. She decides to seduce him, knowing that when her brothers find out, they will back off from the deal. And she'll finally have her revenge. But when her plan spirals out of control, Katie learns that payback may come at too high a price … 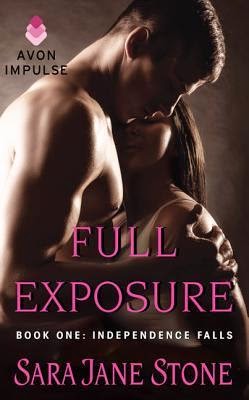 Book Two: Full Exposure
No touching allowed …
After serving her country, Georgia Trulane craves adventure—and sex. She's set her sights on her brother's best friend—now her boss, since she took a temporary job as his nephew's live-in nanny. Only problem? Eric refuses to touch her. That doesn't stop Georgia from seducing him. But an earth-shattering encounter leaves her fully exposed, body and soul.
Eric has a long list of reasons to steer clear of the woman he has wanted for as long as he can remember. For one, he refuses to be her next thrill ride. When he claims her, it will be for good. But the attraction is undeniable, and the more they fight it, the stronger it pulls. But will it be enough to conquer their obstacles?

Armed with a golden retriever and a concealed weapons permit, Lena Clark is fighting for normal. She served her country, but the experience left her emotionally numb and estranged from her career-military family. Staying in Independence Falls seems like the first step to reclaiming her life until the town playboy stumbles into her bed …

Chad Summers is living his dream—helicopter logging by day and slipping between the sheets with Mrs. Right Now by night. Until his wild nights threaten his day job, leaving Chad with a choice: prove he can settle down or kiss his dream goodbye. But when he ends up in the wrong bed, the one woman in Independence Falls he can't touch offers a tempting proposition. Chad is ready and willing to give in to the primal desire to make Lena his at night—on one condition. By day, they pretend their relationship is real.

But their connection extends beyond the bedroom, threatening to turn their sham into reality if Chad can prove he's the hero Lena needs night and day … forever.

After several years on the other side of the publishing industry, Sara Jane Stone bid goodbye to her sales career to pursue her dream—writing romance novels. Sara Jane currently resides in Brooklyn, New York with her very supportive real-life hero, two lively young children and a lazy Burmese cat. Visit her online at www.sarajanestone.com or find her on Facebook at Sara Jane Stone.