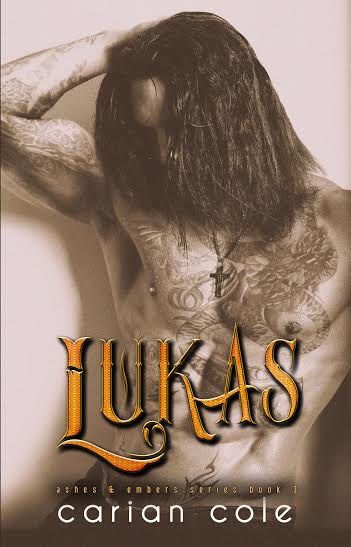 You’ve met him in the background.

The one they can all rely on.

He’s a tattoo artist. He plays metal and classical music - on the violin.

He’s got a body built for sin.

All she wanted was a tattoo.

She got a helluva lot more :)

Being good has never been so bad.

Lukas is like a prism, so many sides to him and you want to experience each and every one of them.

The sweet, venerable man.  The take charge, dirty talking, push me up against a wall man.  The loving, caring, besotted man.  I found each one of those men all in one character all in one book.

Ivy, devoted mother and wife in her mid-thirties betrayed by the one man who should have cherished her forever.

“I lurch toward the toilet and vomit up eighteen years of trust, devotion, commitment and love” Ivy

Betrayal crushes every ounce of self-esteem and confidence this beautiful and intelligent woman possesses.  But there is one man that can give all that back to her.

Lukas is young, in his twenties but somehow old before his time in his mature attitude brought about by his own hurt and insecurities, although to look at him, no one would think he had anything to be insecure about

“Silver piercing’s decorate his eyebrow and lower lip.  His eyes are dark with amber flecks – what we gals would describe as bedroom eyes”

Oh did I mention the broad chest, toned muscular shoulders and full sleeved artwork.  I’ll let you think about all that for a second. Mmmmmmmm. Back with me? Good.

So Ivy and Lukas, an unlikely pairing, he’s nearer her daughters age than hers, but it works.  He’s smitten, she’s being all adult about it, and I just wanted to keep yelling at her to stop adulting and let the man show you what you’ve been missing for the last god knows how many years. The banter between them was funny and the chemistry between them hot.

The story was interspersed with our favourite characters from previous books but could easily be a standalone.

Tragedy is close to hand and deception follows closely taking advantage of Ivy’s self doubt and trust issues.

I was raging mad at this point, you will know why when you get there, I was not happy at all, someone needed a bloody good slap.

And then there was the feathers.

The day after I finished the book I was walking my dogs in the field and found a black feather at my feet, it was actually quite an emotional moment.

Congratulations Carian yet again you have brought us a fine man, who captured our hearts and a strong woman who just needed to be pointed in the right direction to understand her feelings.  They both helped each other recover from pasts that haunted them 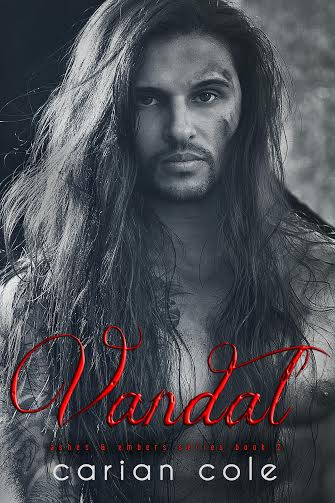 I have a passion for the bad boys, those covered in tattoos, sexy smirks, ripped jeans, fast cars, motorcycles and of course, the sweet girls that try to tame them and win their hearts. My debut series, Ashes & Embers, follows the lives of rock band members as they find, and sometimes lose, the loves of their lives.
My first novel in the Ashes & Embers series, Storm, was published in September of 2014 and book 2, Vandal, was published in February 2015 with several more of this series planned throughout 2015.
Born and raised a Jersey girl, I now reside in beautiful New Hampshire with my husband and our multitude of furry pets and spend most of my time writing, reading, and vacuuming.