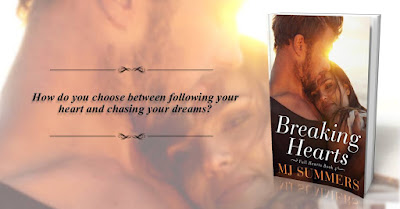 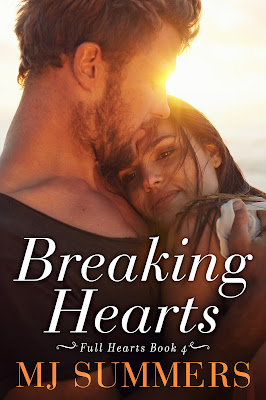 Another unforgettable page-turner from MJ Summers . . .

Three years have passed since handsome, devil-may-care Trey Johnson betrayed his cousin, Cole, and left the family ranch in Colorado behind. Guilt-ridden, a reformed Trey has kept his nose to the grindstone and has done his best to distance himself from his reckless past. Now he’s shocked to discover that he is about to become a full-time father to his son, a child he barely knows.

Travelling to Brazil, Trey embarks on the fight of his life in order to bring his little boy home. Broke and very much alone, the last thing he expects is to find himself falling for Alessandra Santos, his son's nanny. The sparks between them fly, but is there too much at stake?

Alessandra, obedient daughter and top law student, always does what others expect. Whether trying to meet the expectations of her hard-nosed mother or the unreasonable demands of her employer, Alessandra finds it almost impossible to reach for what she really wants. But now that Trey Johnson has sauntered into her life, she will have to find her true voice or lose him forever.

Joined by the fate of a little boy, Alessandra and Trey must decide if they can find a way to open their hearts to each other or turn away from a chance at love.

MJ Summers is slowly killing me. First she wrote a book about a sexy cowboy and now she's written one about a sexy Frenchman. I loved Breaking Love and it was worth every one of the 5 stars that I gave it.
~ Karen, A Thousand Lives Book Blog

"A fun, often humorous, escapist tale that will have readers blushing, laughing and rooting for its characters."
~KIRKUS REVIEW of Breaking Love

What other authors so often fail, MJ championed in this book: in many books this long process of will they/won't they is just too long and after some time it loses the whole appeal, but here... it was not flat or boring for a second, it was all the time gripping and had you on the tips of your toes.
Altogether, the book has made a fascinating, steamy... quick read. Why quick? Well, because I couldn't put it down, so engrossed was I in Megan and Luc's lives. It is a brilliant love story written with a lot of feeling and understanding.... MJ Summers can really write a hot romance with great characters in it, full of misunderstandings, twist and turns, heartbreaks and hurt but still with a lot of joy and that is a great entertainment. I have really enjoyed this book and will be keeping my eye on MJ Summers in the future.
~ On My Book Shelf Review Blog 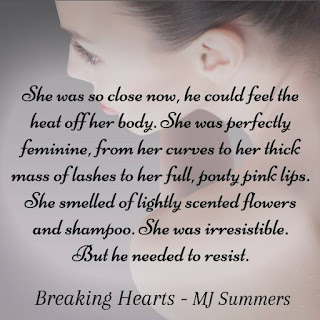 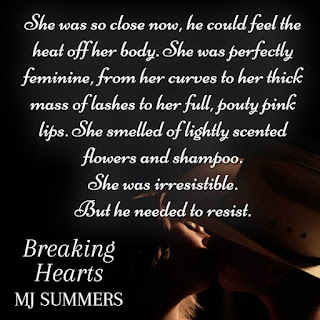 I would suggest you read the whole series so you can get the list of characters and how they are going to play in Trey’s story.  Just a brief background, after a night of drinking Trey ended up with the wrong girl and later found out he was a daddy.  He didn’t get to spend much time with his son as the mother took him and lived in Brazil, but Trey was endearing to me because he was determined to finish college and get a career so he could provide for his son.  But unfortunately, he never had the chance to walk across the stage and get his diploma because he had to rush to Brazil and claim his son after the mother made a horrible choice.

He knew he could run into some issues regarding bringing his son back to America but he is in for a drama filled ride that nothing could have prepared him for.  The first hurdle was gaining the approval of Tomas’s nanny Alessandra.  Second he had to fight Tomas’s maternal grandparents who didn’t want him but didn’t want Trey to have him either.

Alessandra was going to school with high career dreams of her own, but she had been taken advantage of by Tomas’s mother for so long she started feeling responsible for Tomas and his future.  Putting her life on hold for this little boy, she waited for Trey to show up and take a part of her heart.  It didn’t take long for circumstances and chemistry to put them together as a fictional little family as outsiders and the law manipulated things and kept Trey in limbo as to if he would ever be able to return home with his son.

I can’t go into much more because you really need to just experience the story.  While there was an excessive amount of drama, too much for my taste, I gave this a four star rating because the author expertly tied all of the loose ends together and gave a motive and reason for each situation that occurred.  I can see now how she was building the plot but while in the midst of the storm I could really empathize with Trey when it came to begging and praying to be let off the crazy train.  Out of the series this one didn’t provoke the emotions from me like the others did, but Breaking Hearts has its own quality in the series.

You will just have to read the book to see if Trey ever gets his happy ending but be prepared to fall in love with him.  I was overjoyed to find a single man with such devotion and compassion towards his son and having his primary goal in life become making the best life for his son possible.  How can you not love a man like that? 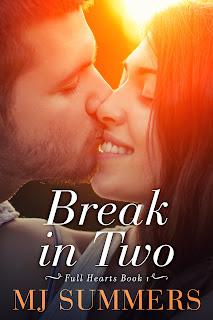 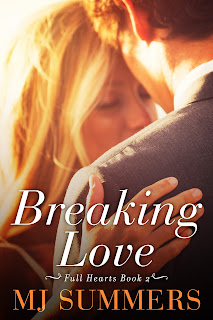 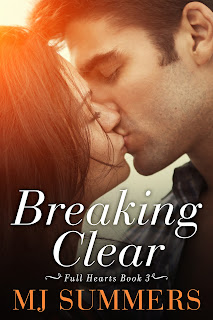 Clever. Steamy. Inspiring.
You fell in love with Harper Young as Megan Sullivan's fiercely loyal, feisty best-friend in Breaking Love. As a talented art director at Style Magazine in Manhattan, she lives a life of glamour, managing to put a safe distance between herself and her painful past. One spring day, she answers a call that will change everything