Love. Hate. Fear. Fate.
All four letter words.
All consuming.
Naked to the eye, they have the power to control the heart and destroy the soul.
April Adams is about to experience them like never before.
When everything in April's life goes up in smoke, she is faced with some life changing decisions.
Join April as she continues her journey of love and loss.
http://www.goodreads.com/book/show/18515008-april-fools?from_search=true

Author Biography
Karli Perrin is a 25 year old English Language & Linguistics graduate from Manchester, England. She has always been a big lover of books and is the author of the 'April' series.
She is a big believer of fate and is a sucker for a happy ending. She honestly believes that there is a reason why you are reading this right now (apart from the fact that you are awesome!)
Her ultimate goal in life is to live in a house made entirely out of books with her best friend, who also happens to be her fiancé.
...Hogwarts is plan B.
http://facebook.com/authorkarliperrin
http://goodreads.com/karliperrin
http://karlijperrin.blogspot.co.uk
Twitter: @karli_UK 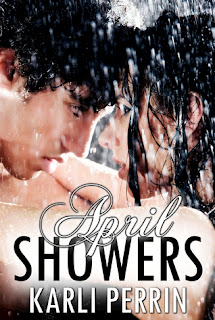 What happens when your head and your heart pull you in completely opposite directions?

April Adams is about to find out the hard way.

Isaac Sharpe is the hottest guy on campus - with an even hotter reputation. After a chance meeting, April quickly finds herself wrapped up in all that he is. But what if all that he is isn't what it seems?

Caught up in a battle between what she wants and what she thinks she needs, April meets Lukas Roberts. Lukas is the security blanket that she craves so desperately and she finds solace in their friendship. But what happens when she finds more than she bargained for?

April has always been a big believer of fate, but will she learn that she's in control of her own destiny before it's too late?

Join April as she embarks on a life changing journey of love and loss, which will have you laughing and crying until the very end

Karli Perrin is very naughty she left me with a cliff hanger that I wasn’t expecting at all.
April Showers is the story of April who goes off to University in Manchester, without her best friend for the first time, and immediately meets the two people who come to dominate her life, Lucas and Isaac.
They are two very different characters but who are both very appealing to April.
Isaac, well goodness where to start with him, perhaps April sums it up the best:
‘Hell I was tempted to play dead in the hope that he would give me the kiss of life’. April
‘I could see the outlines of his toned muscles through his shirt and I was pretty sure that he had a six pack hiding under there’ April
Isaac oozes confidence, oozes sex appeal and there is a certain stock room scene that makes you want to grab him and take him home with you just for your own pleasure.
Lucas more the boy next door type:
‘He smiled and I couldn’t help but think how handsome it made him look.  He was good looking in a boy next door kind of way’. April
Lucas & April have an easy banter and what is a friendship to start with turns in to more, but is it the right kind of more?
He’s the nice guy, the reliable guy, the treat you right kind of guy, but as we all know they are not always the ones we see ourselves with, sometimes the urge for something more than this overwhelms us.
Ms Perrin has given us a well written, plausible story with believable main and secondary characters all of whom bring something to the party.  The book is fast paced with twists and turns around every corner which hook you in and hold onto you. Loved the sarcasm, banter and humour throughout.
But the end, blimey, can’t wait for more.
http://www.amazon.co.uk/April-Showers-ebook/dp/B00DDV2Q96/ref=sr_1_1?s=books&ie=UTF8&qid=1379618460&sr=1-1&keywords=april+showers