**Blog Tour** Mine by Katy Evans 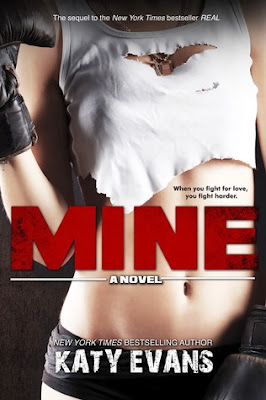 “I will do anything to make her MINE.” —Remington Tate

In the international bestseller REAL, the unstoppable bad boy of the Underground fighting circuit finally met his match. Hired to keep him in prime condition, Brooke Dumas unleashed a primal desire in Remington “Remy” Tate as vital as the air he breathes . . . and now he can’t live without her.

Brooke never imagined she would end up with the man who is every woman’s dream, but not all dreams end happily ever after, and just when they need each other the most, Brooke is torn away from the ringside. Now with distance and darkness between them, the only thing left is to fight for the love of the man she calls MINE.

Nicola's Review
Five Bare Naked Stars *****
He’s back! HE’S BACK!!! Men and women, girls and fucking boys, I give you tonight, your one and only Riiiptide!!! RIPtiiiiide!!”
Remy is back!!!! The epitome of alpha male is back and “ready to take what’s his” in the second instalment of the Real series. He’s packed on the muscle, trained like a madman and raring to get started with the new Underground season with Brooke by his side.
“Don’t even think about leaving me again or I’ll come after you and so help me god, I’m going to tie you to where I am, and where I sleep, and where I eat.  Do you hear me, Brooke Dumas?”
But, that also means the return of Scorpion (ergh, I absolutely hate him). He is the reigning champion after all. However, that also means he will be up to his usual tricks in trying to get under Remy’s skin.  The only difference being this season, he knows Remy’s kryptonite.
“He’s going to do his best to sabotage you this year.  He’s going to try to screw with your head.  Provoke the shit out of you!”
“I’d feel less concerned about him and what he plans to do if he didn’t know your kryptonite now.”
The book centres on the new Underground season and you are transported back to the ring right from the beginning. And what better way to start it.  As soon as I read that first page I was completely hooked and didn’t want to stop reading.  Being back in the world that was Brooke and Remy was far too good.  Their love for one another is Real.  It’s raw and passionate. Intense and unique.
The licking, the petting, the scenting. It’s them. It’s part of what makes their love and relationship unique.  I also love the way they communicate their feelings through the songs they choose for one another.  In Real Remy wasn’t a man of many words. It was through song that he expressed his feelings.  Although he voices his feelings a lot more in this book, I’m happy Katy didn’t lose the significance of the songs.  It’s special and perfect.
I admire Brooke.  She see’s Remy for who he really is. He’s not just a fighter, or the man who battles his mental illness.  She sees the love he has, his worthiness even if he doesn’t see it himself.  She’s his lioness, the queen to his king and they truly do belong together.
“I’m fucking worthless for anything but fighting.”
“No, you’re not.  You’re a great fighter, but that’s not what makes you YOU. Remy, don’t you see how inspiring you are? You’re honest, driven, passionate, fierce and tender.  You protect and provide without any expectations.  I’ve never heard you judge people, criticize.  You live your own life by your rules and do your best to protect those who surround you.  You love even harder than you fight, and I’ve never seen anyone fight like you.”
Yes she has her struggles with her insecurities, and has a complete meltdown with it, but Remy loves her and always reassures her of that.
“Hey, hey, listen to me.” He traps me with his arms and his gaze. “I am insane about you.  I’ve been in hell without you. In hell.  Stop being ridiculous,” he says, squeezing my face. “I love you.  I love you.”
Remy is in a class of his own. It’s undeniable the love he has for Brooke, even if he doesn’t find himself worthy.  The way he battles his mental illness is not only admirable but courageous at the same time.  He doesn’t want to medicate so has to use other methods. It’s heartbreaking.  He’s protective of the people he loves and is not afraid to show it.  He’s perfect.
“Come near her or anything of mine again, and I’ll show you in a heartbeat how dangerous I am,”
But, just when they need each other the most, they are forced into a situation where Brooke needs to leave his side.  Will their relationship survive the separation?  Will Remy be able to stay ‘blue’?
The sex scenes are hot, steamy, wild and passionate. Definitely defines Remy and Brookes relationship.
This book will leave you reeling; I know it did with me.  It brings out so much emotion. I cried, I laughed. I wanted to scream.  I loved how Katy captured the atmosphere in the Underground.  Every fight scene I could picture myself there, ringside, adrenalin pumping, heart hammering in my chest.  Screaming along with the crowd to finish his opponent off. It was exhilarating.
That’s when you know the author has done her job.
If you fell in love with Remy in Real, then you will find yourself falling more in love with him in Mine.
But, fear not.  We don’t have to wait long to get more of our Remy fix.  The third instalment is out on the 26th November.  And what could be hotter than more Remy? We get to experience it through his eyes.

Hey! I’m Katy Evans and I love family, books, life, and love. I’m married with two children and three dogs and spend my time baking, walking, writing, reading, and taking care of my family. Thank you for spending your time with me and picking up my story. I hope you had an amazing time with it, like I did. If you’d like to know more about books in progress, look me up on the Internet, I’d love to hear from you!