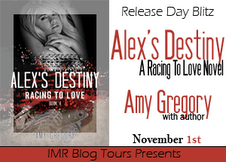 Her destiny was written for her, long before she was ever born. She embraced it, wanting nothing more than to give everything within her back to the sport in which she was considered royalty. Her family’s legacy would live on, revered by all. And she thrived on the long work days she spent teaching at the academy her blood was tied to. Alexandra Sterling needed that dirt track as much as she needed her next breath.


That same track was the one that drew in a young student years before. Alex had given her heart away the day they met, knowing that he belonged to only her. For years she’d waited, knowing without a single doubt that he’d make her his when the time was right.


He’d done nothing but think for hours on end, bleeding into days. He didn’t have the words to do it with a phone call. He had to see her to read her facial expressions. Their relationship would change with that one conversation. For better or worse, he had to do it in person.


Running toward the vacant information desk, he heard his name called. In a surreal moment, he turned, as if his life was a slow-motion movie.  Seeing his mother stand, he scanned the rest of the group sitting in the corner of the waiting room they’d taken over. James and Karen, his sister, Tasia, and brother, Marc, Uncle Jesse and Aunt Emery, Uncle Brody and Aunt Erin—they were all present. He felt his mother’s ice cold hand on his bare forearm and saw the fear in her eyes, the lines deepening across her forehead as her brows tightened.


“Where’s Alex?” He asked, the panic welling up inside him. Jack was missing. He hadn’t gotten a call from him. Had he beaten her brother to the right spot? Grabbing his mother’s hand, he watched the blood drain from her face, and his fears were confirmed. From behind, he heard his father’s voice mixed with that of another, a man he’d met a few times before. It was the words that spiked fear through his body as if he’d been cut wide open by a thousand needles.


“The police will be coming back by later tonight to get more information.” Eli said to the family, who was all standing waiting for his answers.


“I’m glad, but Mike is on his way as we speak.” James added, looking up from his phone. “He just texted that their plane is pulling into the gate right now, he and Taryn will be here as soon as they can.”


knew Carter’s oldest brother Mike very well. He also knew the story of when Carter called for Mike’s help when Molly had been stalked over two decades before. Detective Mike Sterling was a large man, pure muscle, and had a presence that demanded respect. He was the man that saved Molly’s life and that piece of history sent an icy chill down ’s spine. Something minor could be handled by the local authorities. Hearing his grandfather had specifically called on Mike for help, then that meant…turning away from his mother, he met his father eye-to-eye. “Dad…where’s Alex?”


watched Eli’s eyes close, and he swallowed hard. Reaching out, he gripped ’s shoulder. He saw the pain sweep across his father’s face, saw the rise and fall of his chest, and heard his low and deliberate tone.  Upon reopening his eyes, Eli’s voice turned ’s blood to ice, “Son…you need to sit down.”


His father looked sickened. The man standing beside Eli was bare chested, and holding his wrist, both hands bloodied. Suddenly saw fire, yanking from his father’s hold, he stepped back. “Where is she?” He asked once again, this time through clenched teeth, frustrated by the lack of answers, and scared to death of what those answers might be.


He turned and came face-to-face with his Uncle Carter walking down the shining tiled floor of the emergency room.

When asked ‘when do you have time to write’, Amy Gregory simply laughs. The real answer is, “in bits and pieces”. She and her husband live in Kansas City with their three fantastic kids that keep them running in three very different directions. Because she sits so much, she always carries a notebook with her at all times.


She has an off the wall, snarky, off the cuff sense of humor that often shocks even those who’ve known her for years. And she loves that her children have all been blessed that ability to make others laugh as well. At least she’s grateful most of the time! Her husband often teases her about how she “makes this stuff up” when he’s reading a piece of her work. The answer—“it just comes to me when I’m typing”. Scary thought, huh!