**Blog Tour** Music of The Soul by Katie Ashley 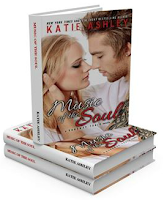 In Music of the Heart, an unexpected twist of fate caused Abby Renard to fall into womanizer Jake Slater’s bed. What started out as a small spark between the unlikely pair, grew into a deep and intense love. After a year-long engagement, the two have finally been able to set a wedding date. It’s off to Mexico for a destination ceremony on a private beach. After a heated week long honeymoon in a tropical paradise, the two return to the real world of touring and making music together.

As the newlyweds settle into married life, another twist of fate challenges their love. For once, Abby isn’t able to be the rock of strength that Jake needs. Can the two of them hold on to the strong foundation of love they have built, or will it crumble under the pressure?

Long after the last footsteps could be heard pattering down the hall or the sound of water in the pipes, I finally threw back the covers and hopped out of bed.

I knew exactly what I wanted to wear, and it only took two seconds to pull it out of my suitcase. I then slipped into the bathroom and got dressed. As soon as I was done, I crept out of the bedroom and down the hall. I could hear my dad snoring in the guest bedroom, while the sound of muted TV came from the office where Eli and Gabe were sleeping on an air mattress and the pullout couch. Grabbing a flashlight out of the hall closet, I then snuck out the front door. I jogged as fast as I could in my robe and slippers across the front lawn and down the hill. Thankfully, Angel had actually listened to me when I told her to stay on the porch. The last thing I needed was for her to start a barking marathon and alert everyone that I was running around half-naked outside.

When I got to the barn, I reached under one of the potted plants to get out the hide-a-key. Gently, I unlocked the door and stepped inside. When I closed the door behind me, I heard rustling in the bed upstairs. Without hesitation, I made my way across the living room toward the stairs. Of course, I didn’t expect Jake to have left his shoes in the middle of the floor, causing me to trip and bang into the ladder.

“Ow!” I cried before I could bite down on my lip.

“Abby?” Jake questioned. Within a few seconds, he was peering over the railing of the loft.

Gazing up at him, I teased, “Yes, it’s me. Were you expecting someone else?”

His brows furrowed. “I wasn’t expecting anyone, especially you.”

Jake gave me a funny look as I started climbing the stairs. When I got to the top rung of the ladder, he helped me off. “What are you doing here?”

To answer his question, I undid the tie on my robe. I then shimmied it off my shoulders and let it fall to the floor. Jake’s eyes widened while his mouth gaped open at my skimpy lingerie. “Abby…”

“Do you remember this?” I asked, running my hand over the silky material.

As the revelation washed over him, desire burned in his eyes. “You were wearing that the night we made love for the first time.”

“Yes, I was.” Stepping forward, I wrapped my arms around his neck. “I want you to finish what you started earlier this afternoon. But most of all, I want you to make love to me again on our wedding eve in the same place we first came together.”

Jake’s gaze left mine to momentarily flicker over to the clock on the nightstand. “But it’s after midnight. That means it’s our wedding day. What about the bad luck?”

As his arms wrapped tighter around me, he cocked his head at me. “Trust me, Angel, I certainly don’t want to argue with you. I just don’t want you to regret it later.”

“There hasn’t been a single moment I’ve regretted with you.”

He smiled. “I’m really glad to hear that.”

“So are you down with my plan?”

Other Works of Katie Ashley

The Proposition | The Proposal | The Party

Search Me | Don’t Hate the Player…Hate the Game

Music of The Soul by Katie Ashley

This novella nicely rounds up Jake and Abby’s story as it opens on the exciting pre-wedding day build up. They are trying to ‘abstain’ to make their wedding night special, which results in them getting very hot under the collar……

“We’re abstaining until our wedding night, remember?”
I groaned “You’re the one who made that decision, not me”
“You agreed to it, she countered”
“Yeah, that was a week and a half ago when I was coming off an all-day sexathon with you. I didn’t realise what I was agreeing to.”

Jake is more settled now and totally comfortable to have Abby and to be getting married. Although he’s still nervous about starting a family, it seems his bandmates are doing nothing but having kids, and Abby is totally broody!

“Is wanting a baby such a bad thing?”
“When it’s going to be five years before we have one, then yeah, it’s is bad for you to get so attached to the idea”

And in  true Jake fashion his insecurities manifest………he very nearly ruins their honeymoon.

They get home and settle into their new life , the band is getting huge, they are busy touring and songs are coming to Jake thick and fast until an event that turns his and Abby’s world upside down.

“Without a thought, I raced to her side. “Is she….” My voice choked off. I couldn’t even form the words I feared so much.
As usual Jake takes it out on the ones he loves…..AJ and Mia!

“Abby sure as hell deserves a baby more than some whore who got knocked up!”

Will Abby ever recover from a future snatched from her?
Will Jake get over his guilt and make his marriage work?

Take a look and complete Jake and Abby’s story! I defy you not to laugh and cry!