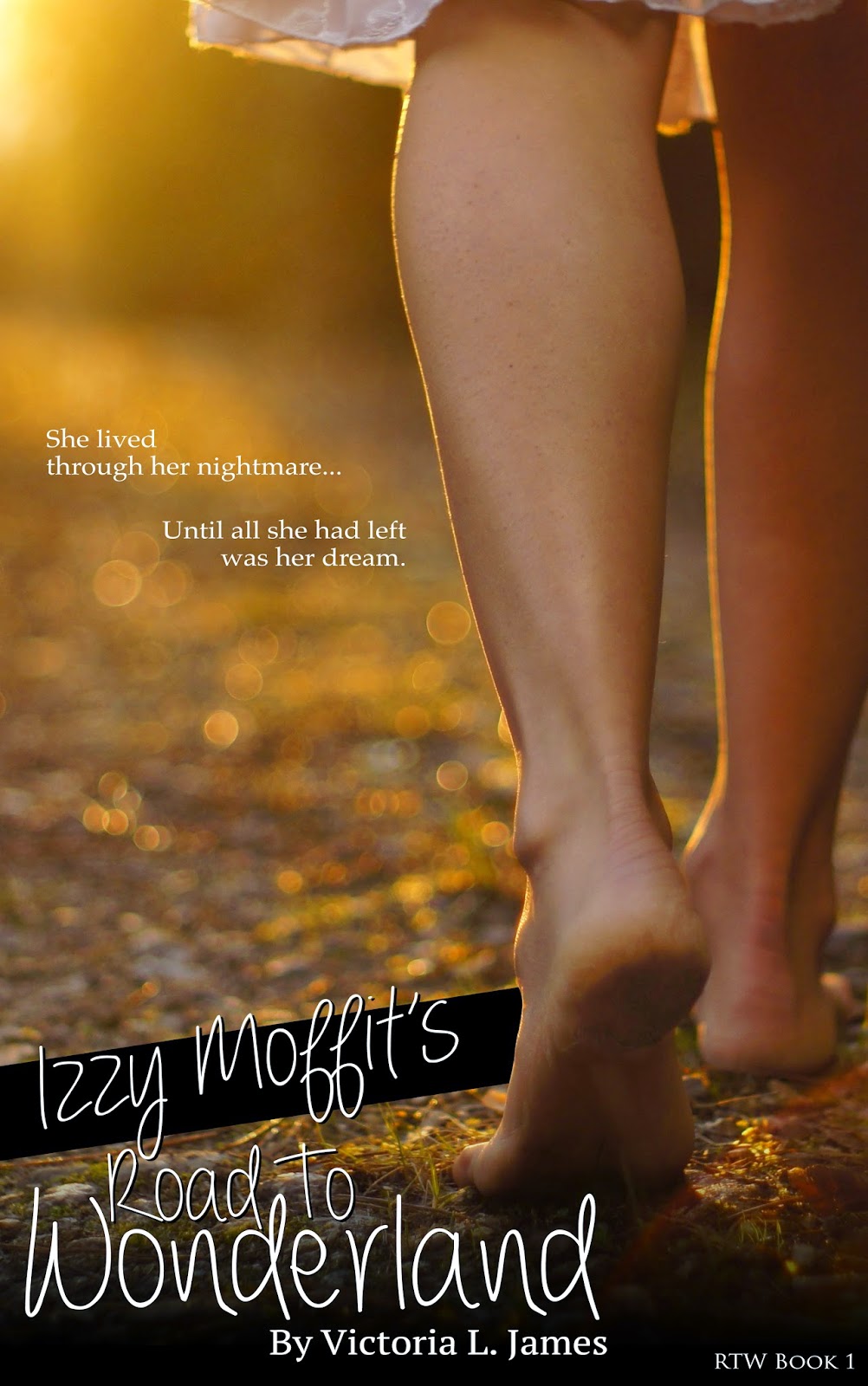 Making it to seventeen in one piece isn’t usually a concern for your average teenager, but if there’s one thing Isabella Moffit has never been, it’s average. Dragged through life by parents who couldn’t care less and surrounded by violence on a daily basis, Izzy reaches that epic birthday milestone in her life with only one person to thank for getting her there: her best friend and soul sister, Paris Hemsworth.

Vowing to stand side by side through thick and thin since they were four years old, the two of them have made it this far and are confident that now is their time to tackle the world head on, one shaky, naive little footstep at a time.

Except they have no idea what awaits them both on the other side of adulthood, and before either one of them can strap on their hard hat, they’re taking so many knocks and bruises that Izzy’s childhood suddenly seems like a stroll in the park.

Dodging as many bullets as they can along the way, Izzy tries to hold on to Paris’ hand for as long as possible without either one of them slipping away. But no-one ever told them how rough their journey would be. No-one told them that friends and family would change or leave along the way. And no-one told them that for every good intention they have, there’s a thousand people out there with bad ones, waiting to rip them apart.

Follow Izzy’s journey in part one of the Road to Wonderland series - a coming of age novel with a difference, where you’ll face tears, tantrums, laughter and heartbreak, but above all else, hope. Hope that no matter what life throws your way, it’s all part of setting you on the right path to your very own Wonderland and that, more often than not, everything happens for a reason 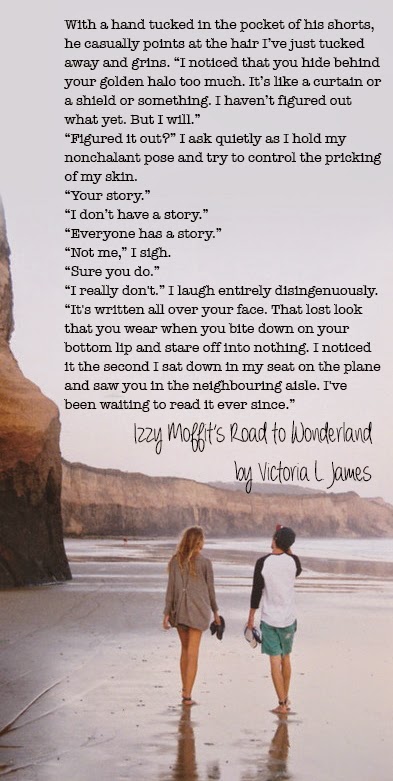 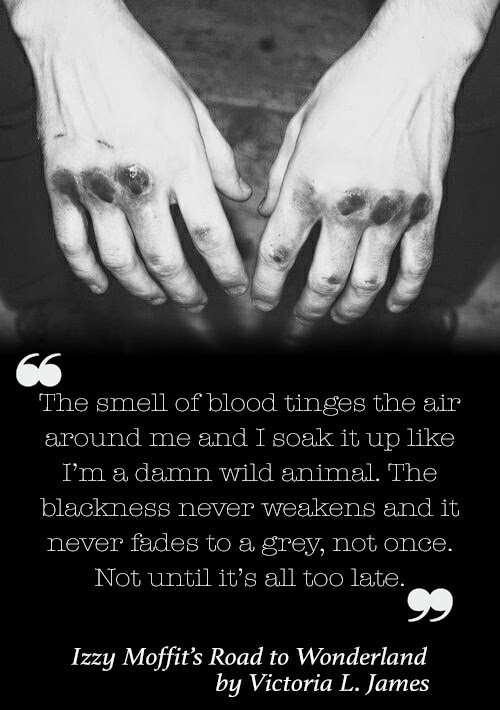 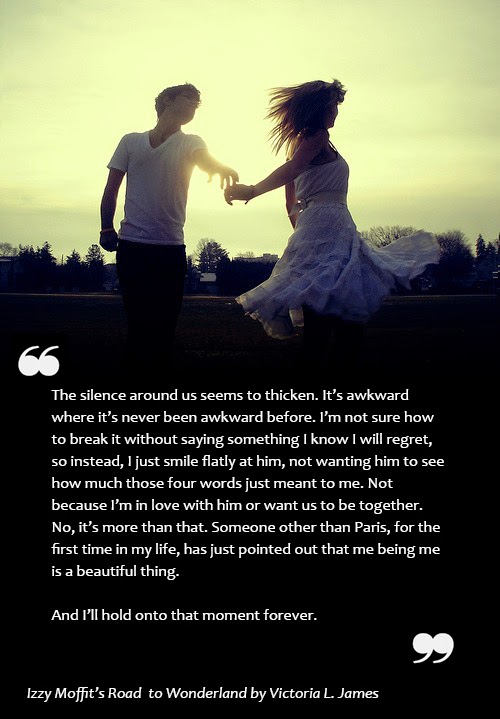 
I had the opportunity to read Izzy Moffit’s Road to Wonderland while beta reading and editing for Victoria L James and what a pleasure that was.

Victoria writes beautifully, I’m not ashamed to say I cried, I laughed, I gasped, everything that Izzy (and Paris) felt, I felt it along with them. It’s actually incredibly hard to edit a book you enjoy so much, I constantly had to go over it as I realized I was ‘reading’ instead of ‘editing’ and I’m looking forward to reading it purely for pleasure.

We meet Izzy and Paris in the Prologue, aged 10, immediately you can feel their bond, but also Izzy’s struggle. Her life is clearly poles apart from her best friend’s but even aged 10 they are funny, you actually can visualise this conversation between two 10 yr olds….

**“I’m her anchor.”
“Her wanker?”
Unable to stop myself from looking up, still struggling against the pain that’s floating around in the back of my head and making my eyes fill with water, I turn to her and frown. “You just swore.”
“You did it first,” she replies, holding back a giggle.
“No, no I didn’t. I said anchor… anchor!”
“Like one of those things on a boat?” Her little button nose turns up at the end, something she only ever does when she’s confused. **

As Izzy grows up and her life at home becomes unbearable, she's forced to run to the only other place she's ever called home. She runs to her best friend, Paris, and the Hemsworth family for help.

Aged 17 she picks herself up with their support and feels like her life can only be on the up, because it could hardly get worse, right? Hmmmm life has a way of letting you think that, then kicking you right were it hurts with a sucker punch!

As the people around her change, she changes and grows, and grows up, with a few visible battle scars, and a few not so visible and watching how she copes truly makes you think that what doesn’t kill you, does make you stronger.

Izzy’s struggles are heartfelt, she is a character you immediately bond with, she is very real with very real emotions and flaws and as her life rollercoaster’s you can’t help but cheer her on when she fights back, and scream nooooooooo when she is knocked down. Her relationship with Paris is so reminiscent of any teenage girl’s relationship with their best friend (well mine anyway) and that in itself is fairly poignant.

I’m not going to lie, the story, in parts, is a tough read, but then so is life, you will also laugh OUT LOUD and you will FIST PUMP in triumph at times, what you won’t do is put it down until then end, until you’ve finished it…and smiled.

**“You're beautiful,” he whispers softly, reaching up to tuck my hair behind my ear so he can see me properly.
“Lay off the cheap beer, Matt. It's messing with your head.” I chuckle awkwardly. There's no real laughter behind it at all. It's just a noise for me to make that I'm hoping will drown out the thudding sound I'm certain my jaw must have made when it landed on the floor.**

**I look down briefly, unsure I can find the strength to continue with this conversation, my head nodding in slow acknowledgement of his question.
“The will is in place, but it's not enough for me. I can leave you all the material things I have in this world, but what I want more than anything is to leave you with my voice.”
A single tear drops down my cheek as I look back at him.**

**The next thing I know, I wake up in a cold, dark room, the faint glow of the moonlight drifting through the windows, casting eerie shadows around my barren apartment. My neck aches from the angle I’ve been laid on it as I try to turn and look at the flashing, red numbers on the clock that sits on my small fireplace. It’s almost one in the morning. I haven’t eaten. I haven’t moved. I haven’t even taken off my robe. I haven't celebrated. I haven't even seen a single second of the night.
Most importantly, I haven’t heard back from Paris, either.**

**My days in Cyprus seem to melt away in a haze of Parker-induced fun and conversation. After our introductions at the bar and several more drinks, Jack convinced me to dance with him poolside and ignore the gazes of those around us.
I can’t be sure what makes me agree to his every suggestion, but no matter what he tells me to do, he always seems to have a way of making it sound like a good idea. **

**Paris lifts her head as though what I've just said has had the exact same effect on her. Her eyes light up under the midday rays of light and her hair blows around her shoulders, framing her face. The smile playing on her lips is genuine and full of excitement. “Wonderland. I like it.” **

So go and grab this book from 17th Oct – put it on your TBR – you will NOT regret it. And put a note on your calendar for Paris’s story – coming early 2015!