Haven't read Midnight yet? Get it for free here: http://amzn.to/1Mh5oGZ

But Charlie learns all is not lost, nor was her love given in vain. With a new understanding of how she came into Colin’s life, and his true feelings,
their sensual affair continues.

Holding on to hope, Charlie gives him her heart and he’s promised to protect it and her. Yet real danger lurks at every corner, in every city and behind
each door. Colin must find a way to keep her safe and by his side, all the while remaining committed to his bid on the White House.

While Colin wrestles with Charlie's security and the campaign, she struggles with new-found fame. Washington demands perfection and she is far from pure.
Can Charlie remain true to herself and help Colin realize his dream? Or will outside forces tear them apart for good? Midnight Sky is a story of sacrifice
and a love so true, it transcends public persecution and deep-seated insecurities. 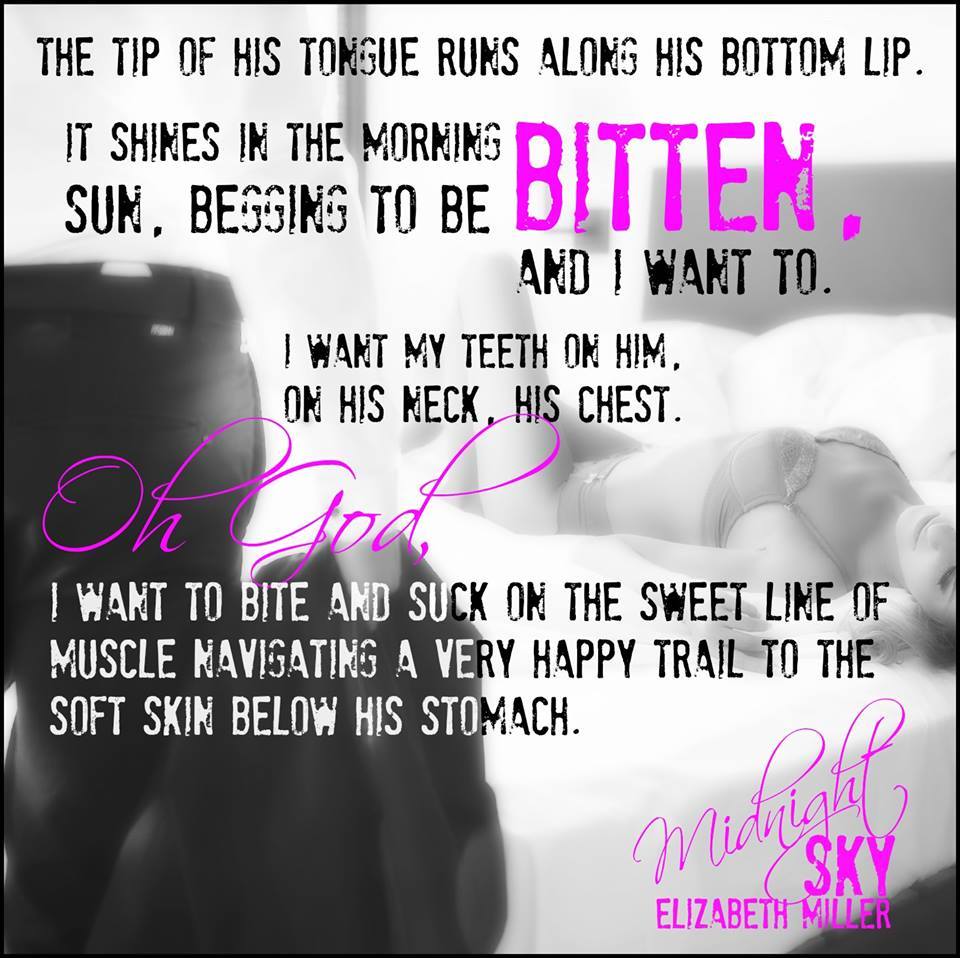 “Welcome to the world of make-believe, where appearances are not as they seem and wine is the only cure for it.”

After reading and falling in love with ‘Midnight’ I was eager to get my hands on the continuation of Colin and Charlie’s story and as before Elizabeth Miller did not disappoint. She has this uncanny ability to not only write a magnificent story but to incorporate a subject which is normally confusing as hell and write it in a way which we can all relate and understand. I cannot commend this book; this series enough. It truly is wonderful.

We are thrown straight back into the thick of things after Charlie discovers some shocking information that leaves her heart breaking.

But Colin isn’t one to let his heart go and he immediately fights for what and who he wants.

“You captured my heart from the very beginning. It will belong to you for all of time Charlie.”

“Taking his hand I place it between my breasts. A frantic, beating rhythm greets his fingers. “Feel this?”…”It belongs to you—forever. No other man could ever own it the way you do”.

But with obstacles and danger constantly trying to keep them both apart and Charlie’s fear of not fitting into Colin’s world.

Can Colin prove to Charlie that she is exactly what we wants and needs?

Before I knew you existed, I craved you. Craved the closeness, the contact, and the person who could take me away from the false pretence and feel alive again. You said that I saved you, but it’s simply not true.”…”You saved me from a life of solitude. People surround me, yet I’d never been more alone. So, you can ask of me anything and I will give it freely. You have my heart. I’ll give you my life, but don’t ask me to give you up. I won’t survive it, Charlie.”

Charlie and Colin are the perfect for each other; while their pasts left them utterly devastated and heartbroken, together they healed each other and become something greater than what they had ever expected. They learned what love truly was and that together they could overcome anything.

Although Politics is still at the forefront of the book, I felt as though it took a little bit of a backburner in ‘Midnight Sky’ to make way for their relationship. We get to see Colin and Charlie’s in a much deeper level and watch them grow both together and as individuals.

I loved that we got to see the inner battle Charlie had and the constant pressure that she put herself under to become the perfect person she thought Colin needed. But you also got to see the determination she had not to let anyone tear them apart, not even Colin when he ‘thought it was for the best’.

Colin made my heart swell in this book, especially when he showed Charlie to what extent he would go to protect her. I had tears in my eyes and my heart was in my throat while I waited for the outcome to what happened. It was the ultimate act of love and it was both heart-wrenching and swoon-worthy.

As the pages and story unravel it only gets better and I was utterly disappointed when I finished reading this book. I have fallen in love with these two characters and could quite happily carry on reading how their story unfolds forever.

Questions are answered but new ones arise as we are left again waiting for the third and final book in this fantastic debut series but a promising author.

It had everything you could possibly want in a book. Love, humour, a plot with lots of suspense, and an intense, HOT passion that only increases the more you read.

Ms. Miller, you still have me captivated and excited with your phenomenal writing and I cannot wait to get more Charlie and Colin as well as many more future stories.

Bare chest heaving, Colin kneels on the edge of the mattress staring: drinking me in with
those insatiable midnight blues. He doesn’t speak, he doesn’t have to. I can see everything written in the tight clench of his jaw, the tension easing as
his gaze lingers over my body. He wants me, but it’s more than that. More than need, more than lust. The shadow covering his face is not enough to hide his
love. I may be dinner, but it’s a feast worthy of a king.

An unexpected moan escapes my parted lips, yanking his gaze back to mine. He smiles a
feral smirk that grows as he falls to his hands and crawls over me until we’re nose to nose.

I lick my lips and accept his mouth when he crushes mine. The hunger eating away at me
for days is released and reciprocated as we paw at each other. I’m desperate to touch, pet and claw my nails down his back. I feel his answering moan in
the pulse between my thighs. It’s not enough, it’s never enough. Not with Colin. Snaking my hand between us, I unleash his belt. When I fumble at the
zipper I settle for palming his erection through his pants. His mouth becomes more urgent, as does his tongue and hands.

But he breaks away, pushing up to his knees and pressing mine apart with the spread of his. The harsh sound of our labored breathing falls like the tails
of a firework display all around us: explosive and ready to start of fire.

“No…” I reach for his fly again with more success this time, moving under his briefs to
find his hard length. Taking back a little control my fingers glide over his penis and squeeze at the base. It’s not fair, so not fair, that he’s
completely unfazed and hot as hell. A lock of hair has fallen on his forehead; no doubt released from its perfection by my grip. I want him everywhere. I
want to become overwhelmed by Colin McKenna. My mouth filled with the taste of him on my tongue. Blinded by his beauty and held captive by his touch. I
need to break through his implacable self-discipline and I just might know how. 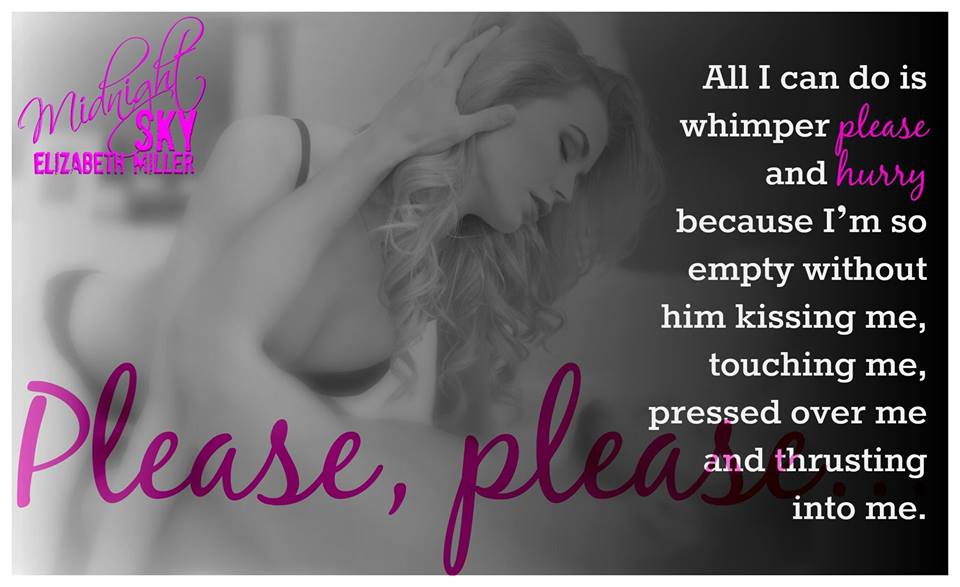 AUTHOR ELIZABETH MILLER resides in Rochester MI with her very sarcastic husband and two young boys. In 2013 she decided to flex her writing muscles and
began her debut novel: Midnight. Published in 2014, she continues writing the McKenna Chronicles with the second installment due for release in early 2015.
Elizabeth loves to chat with readers. 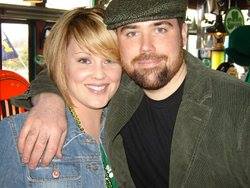 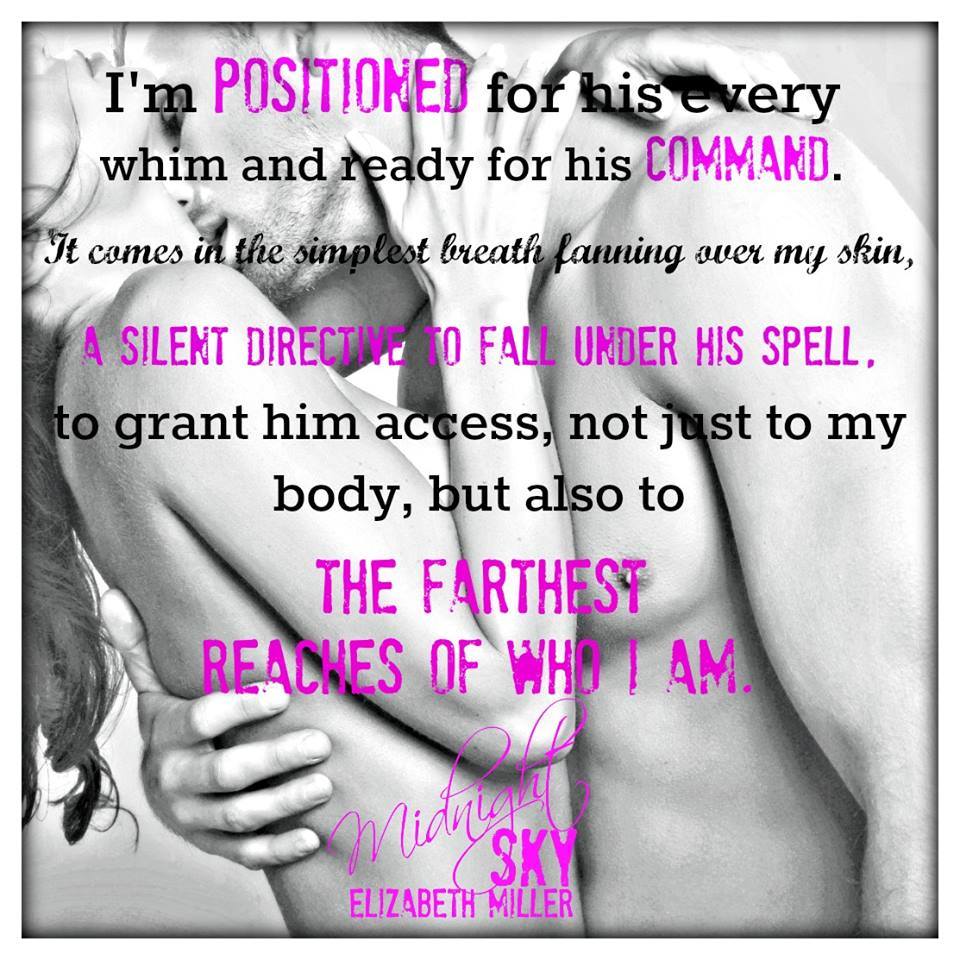