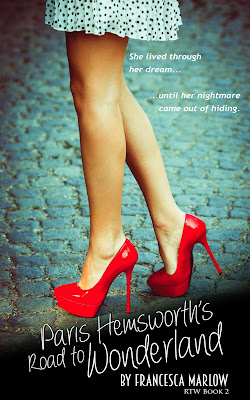 ‘Paris Hemsworth’s Road To Wonderland’ is the second novel in a new adult series, which tells the tale of a seventeen-year-old girl's tragedy. A tragedy that steers her down an unlikely path full of twists and turns.

Paris is a naive, feisty fashionista who floats, carefree, through her life in 1990’s Manchester, thanks to her three great loves: her father, her best friend, and her motorbike. Izzy Moffit is a shy, quiet, literature lover who has been surrounded by violence daily, seeking solace in movies and music. The two are an unlikely duo, but since the age of four, they have been inseparable, always promising to be there for each other no matter what.


That is until one day Paris receives heart-shattering news which turns her life upside-down. Suddenly, their friendship is tested in ways it never has before, and just when things are starting to look up for them, adulthood steps in and kicks them both in unimaginable ways. Paris is forced into a life full of fear, guilt and doubt, which sees her evolve from the feisty, fun young girl she once was into something she never thought she’d be. Weak.

Having hit rock bottom, Paris is left with two options: climb the ladder back up or continue to swim in the sea of despair. The first option is easier said than done when you have no hope or faith left, when the loves of your life have all moved on, and you think you’re alone in the world. In the war against addiction, Paris knows it is only a matter of time before something has to give, but she is unable to predict at what cost 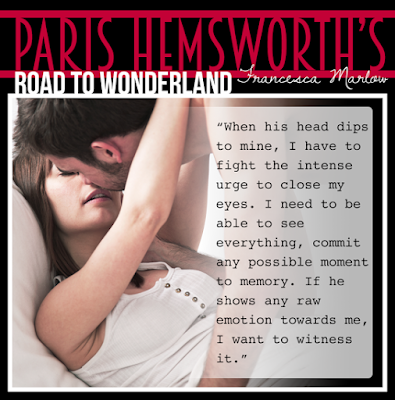 Francesca is a self-confessed drifter, never quite fitting in anywhere until she discovered the love of reading two years ago. Books proved to be non-judgemental, loyal and thought provoking, so much so that she was inspired to create her own world. A world where she could channel her every day thoughts and emotions to deal with the daily grind which we call ‘life’.

Francesca’s biggest accomplishments to date are the two little ladies that share her heart, closely followed by the one thing she is very proud to say: “I wrote a bloody novel!” She’s a Yorkshire lass and a secret romantic at heart, with an eclectic taste in music and a great love for films - all of which continue to be a source of creativity as well as well deserved relaxation moments. 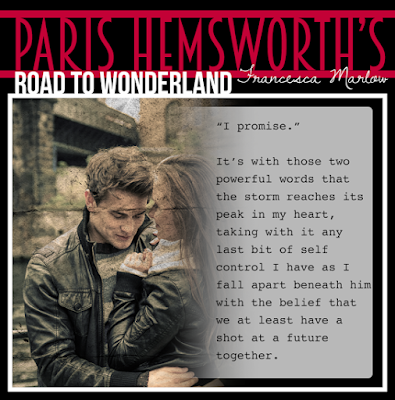 Max: *Pours a prosecco for the lady and a Jack on the rocks for myself and settles into the sofa, turning to Paris with a smirk.*

Paris: *Gladly takes the prosecco and smirks back*

Max: Well, hello, Ms Hemsworth. *Rubs hands together and grins* My favourite blogger ladies have sent me to interview you, you lucky thing. Drink up. I’m feeling cheeky today. *Wiggles eyebrows and shuffles in the seat.*

Paris: And aren’t you just loving this *exaggerated grin with an eye roll*

Max: As a youngster, it seemed like you had it made. You had the perfect life for a young girl and seemed to ooze about as much confidence as a teenage girl can have until your life got turned upside down. How much do you think that solid start in life helped you to overcome all you’ve been through since then?

Paris: *Chuckles* nothing like dropping me straight in at the deep end eh Maxy? One of the things that solid start in life gave me was Izzy and without her constant help, encouragement and support, I would never have made it through half the problems I have. Then there’s my dad. As much as we all know I sometimes struggle to talk about him at times, he was my hero growing up. Our bond and the things he taught me were always remembered over the years, especially when at low points, so I guess my solid start proved to be vital.

Max: You’ve grown into an extraordinarily strong, courageous and fun woman. If you could change any of the life experiences that have brought you to this point, would you?

Paris: I’ve had some extremely tough ones, and I’d like to say I would go back and change certain things like my drug addiction but then like you say, it’s all made me who I am today and at this point, I’m happy :-)

Max: One of those experiences involved a certain young professor I know some of your female readers have something of an interest in. *Smirks* Do you know what became of Professor Yummers and his ruler? *Taps hand against my legs and winks*

Paris: *Laughs* hopefully the ruler ended up shoved up his arse! To answer, no I don’t and I’m passed caring.

Max: I get the impression that at heart, you’re a hopeless romantic. You’ve had a lot of setbacks in your life, yet you still have an amazing optimism about you. If your prince charming was to turn up on your doorstep tomorrow, what would he be like?

Paris: God this is easy - tall, dark, tattoo’d and has the same love for riding as me. But in all seriousness, it would just be nice to meet a guy who takes me on a date to a nice fish restaurant and let’s me drive his brand new R8 *wiggles brows, smirks*

Max: Several times during your story, we see you questioning your own worth and talking about how you’ve let your father down. Do you still believe that or do you think he would be super proud of all you’ve overcome in your life and the woman you’ve become?

Paris: *Looks down the glass of prosecco, speaks a bit quieter* I still believe I’ve had moments where he would have felt extremely let down by my behaviour but I find comfort sometimes, in hoping that he’s looking down on me from his Harley in the sky, with a big, beaming smile at how I’ve come out the other side. There isn’t a day goes back where I don’t think about him and what he would say right now if he was here. All I can do is hope.

Max: *Leans in and grins wickedly* So, you grew up with Izzy as a best friend. You got any fun tales to tell of the stuff you pair used to get up to? I KNOW you weren’t angels!

Paris: *Snorts* as if I’m going to dish the dirt! There aren’t many stories that I could tell you that don’t incriminate me, too. So we’ll just skip that one very quickly *grins wickedly back*.

Max: If you could stand up to Daggs and say anything at all in the world to him with no fear of repercussions, what would you say?

Paris: *Looks Maxy in the eye all serious like* I’d stand up to him, square in the eye, nose to nose and say *pauses for a moment* the dick on your head has always been bigger than the one in your pants. *smiles* but no, I’m not sure there is anything left to say to him. I try to block out his existence and not even grant him the worthiness of a mere thought.

Max: *Snickers and sits back, stretching my arm along the back of the sofa* When the waiter put down that plate of snails in front of you, on a scale of 1-50, how badly did you want to kill me?

Max: *Chuckles and quirks an eyebrow at her* Are you still in love with Ronan Keating?

Paris: Think that crush died along with the 90’s!

Max: We talk a lot about Wonderland as this magical place where we get to rule our own lives rather than conforming to the rules the real world throws at us. If you could go anywhere on the planet tomorrow, no strings and no charge, where would your Wonderland be?

Paris: Oooooo, that’s a toughie. There are so many places I’d love to travel to and explore, but right now I could use a beautiful sandy beach, plenty of cocktails and some rest and relaxation so I’m going to opt for somewhere like the Bahamas. Want to join me??

Max: *Grins and flashes passport* Oh, darlin’, I was hoping you’d say that! When do we leave?

Paris: *Jumps up with a now empty glass of prosecco* Now! Let’s go!