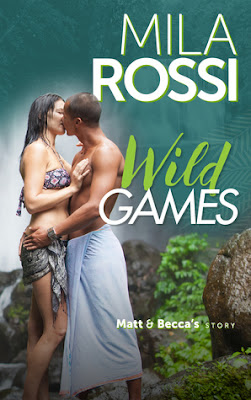 Despite warnings of annoying mosquitos and beastly spiders, Becca Glover couldn’t be more excited about her expedition to Costa Rica. Rooming with Matt Ritter, however, is an inconvenience she doesn’t see coming. He wields a machete, shaves with a knife and needs to wear a decent amount of clothes to cover the muscles she can’t stop staring at.
Hired to lead a group of scientists through the jungle, Matt is convinced the fiery redhead is intent on making his job harder than it needs to be. Rebecca doesn’t listen and seems to invite danger at every turn. Her attitude is as much of a distraction as her curves and emerald green eyes. Now if he could only pay as much attention to his job as he does to her, their one-month adventure would fly by without a hitch.
Hot temperatures, wild animals and a shared tree house are just the beginning of Becca and Matt’s obstacles. The real challenge lies in surviving each other.

Check out other books in the series

This is a short, humorous and hot read that will entertain you throughout.

I’ll be honest Becca needs to work on her interpersonal skills at the start of this book. She certainly does not endear herself when she first meets Matt.

Matt, a rough and ready outdoor type, typical bloke with no filter but he made me laugh, I love blokes that say it how it is.

These two characters clashed over most things, but being made to bunk up together for this jungle adventure sparks were bound to fly.

Becca is a scientist, so she is smart and feisty and yet at first I wanted to smack her up the side of the head sometimes.  She was unnecessarily snotty to Matt, the only reason I forgave her was because I genuinely believed she behaved this way because she found him overwhelming and it was her defense mechanism.  She wasn’t used to the over protective alpha type and her natural reaction was to protest against it which just got her in to more trouble.

Once she lightened up a bit she found herself attracted to the maleness of him, of course his super ripped physique helped too. He is certainly easy on the eye and given they are in the jungle and its so hot, shirts were optional.

The steamy moments were not overdone, there was a story in there too, and although this is only a short story it is well worth the read.  And if you like this one, then take a look at Mila’s other fast paced novellas.

For me this was a quick read, very entertaining with just the right amount of saucy scenes.

Mila Rossi is a contemporary romance author. She creates heroines who don't back down, stand up for themselves and insist on freedom and independence until the right man comes along. Then all rules are thrown out the window. The heroes must be clever, generous and able to throw a girl over their shoulder.
Mila has seen the world and loves to write about it. She also loves to paint vintage anime characters, belly dance, try new foods and perfect her archery skills. She wishes she could partake in extreme sports but only allows her characters to tempt fate. Her own chances of causing disasters are just too high.
She writes historical romance under the name Alice Lake and her e-books are available on Amazon.

What were your go to books as a child?

I grew up in Romania and Austria, so my reading was centered around the fairy tales of the Grimm brothers and Hans Christian Andersen. I also loved Die Knickerbockerbande, which was a German mystery series for kids, and my favorite book was Das Doppelte Lottchen, the story of separated twins who run into each other at camp and then try to reunite their parents.

Who inspired you to become an author?

Does it sound cheesy if I say I motivated myself? My aunt found a letter I wrote to her when I was nine years old declaring I was going to become a writer. It’s been a long journey I guess. My love for reading naturally led me to the writing process, so when I was twenty-four, I decided to write a book. It was a disaster, but at least a beginning.
Do you have a set process for writing?  Or do you wing it?

I do have a process. After trying to wing it unsuccessfully, I had to become organized, not my speciality. Since doing that, my writing flows so much better and I can get the first draft of a novella done in about a month. I outline chapters, subchapters and add writing prompts for each subchapter, so I know where the story is going when I sit down to write every day. I try everything possible not to get stuck, because once writer’s block kicks in, I’m screwed.

Who are your favourite book characters in the Contemporary Romance genre?

Goodness, I have no idea. I read so many books over the years, I sometimes buy the same book not remembering that I’ve already read it. Trying to pick a favourite character is impossible. I do enjoy Stephanie Plum, who is Janet Evanovich’s creation. Any heroine encompassing self-deprecating humour, guts and a dash of walking disaster is alright in my book.

Which book can you reread over and over?

I’d love to have a list of rereads but after rehashing the same books in college for my Bachelors and Masters degrees (I was an English major and Technical Writing grad student), I am hesitant to get stuck on reading the same thing. I’d rather discover new authors and stories, but having said that, I have an enormous wall covered with bookshelves housing books I thought were keepers. Amongst them are historical romances by Amanda Quick, Tessa Dare, Mary Balogh, just to name a few, as well as contemporary romances by Robyn Carr and Jayne Ann Krentz. Outside the romance genre, I like Stephen King’s twisted mind. The book that has stuck with me forever is Gerald’s Game. I’d reread that one probably.

What would it surprise your readers to know about you?

I love awesomely bad movies, like the kind where a shark fights an alligator, for example. I’m shaking my head and laughing at this because it sounds ridiculous. So yes, I’m a Sharknado fan. What else? I write my books in English, which is my third language (Romanian and German are my first two). And lastly, I’m very competitive with my husband. We try to outdo each other all the time, at photography, movie quoting, and sometimes even sports, but so far I only beat him at kayaking. Until I got seasick and threw up.

What's next for Mila Rossi?

I have an outline done for a romance set in a snowy cabin, but another story keeps butting in, demanding to be written first. It’s about a smart yet cynical scientist, a badass fighter and the consequences of their one-night-stand. Hm. Not sure which story will make it onto the page first. Other than that, I am getting ready to publish the first Victorian-era romance book in my GUILD OF HYBRIDS series which I write under the name Alice Lake. That should come out, fingers crossed. I also have several other Mila Rossi novellas brewing for next year, but we’ll see how much my brain can handle.